Anriette Esterhuysen, new chair of IGF Multistakeholder Advisory Group, will strive to ensure the global South is part of the conversation

Home / News / Anriette Esterhuysen, new chair of IGF Multistakeholder Advisory Group, will strive to ensure the global South is part of the conversation 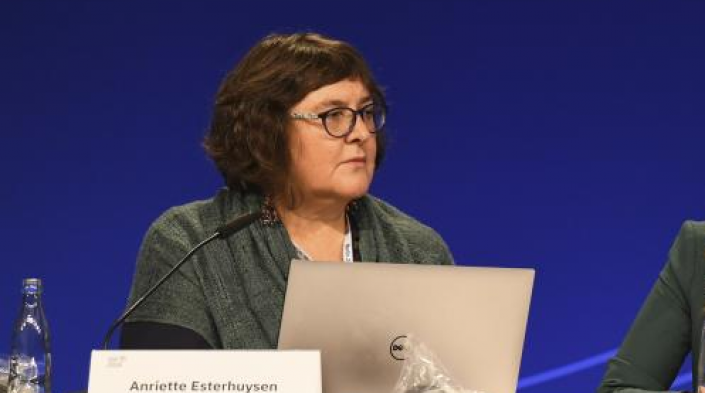 An announcement by UN Secretary-General António Guterres at the opening of the 2019 Internet Governance Forum (IGF) in Berlin on 26 November made particularly big waves in the APC community: his appointment of Anriette Esterhuysen as the new chair of the IGF’s Multistakeholder Advisory Group (MAG).

The MAG advises the Secretary-General on the programme of the annual meetings of the IGF, which was initially convened by the UN Secretary General in 2006 to “foster the sustainability, robustness, security, stability and development of the internet.” The Group is made up of 50 members drawn from governments, the private sector and civil society, and representatives of the academic and technical communities, reflecting the multistakeholder approach that is meant to be a core principle of the IGF.

Anriette was the executive director of APC for 17 years, beginning in the year 2000. Although she stepped down from the position in 2017, she has remained an integral part of the organisation: she is currently senior advisor on internet governance, policy advocacy and strategic planning, as a consultant. Among her many activities in this capacity is her continued leading role in the annual convening of the African School on Internet Governance (AfriSIG). In addition to her work with APC, she is also a commissioner on the Global Commission on the Stability of Cyberspace (GCSC).

In the words of current APC executive director Chat Garcia Ramilo, Anriette is the “perfect fit” for this new role of IGF MAG chair. “As former director of APC, she has been involved in the IGF space from the beginning,” Chat said. “APC has participated in this process since its origins, and as an organisation we believe we should continue to incorporate inclusive, diverse participation from a civil society perspective in this space.”

Anriette shared her own views on the appointment in an interview with APCNews shortly after the announcement was made.

APCNews: What makes the IGF useful space, from your point of view?

Anriette Esterhuysen: It is a very useful space, because people make it useful. Civil society organisations, for example, do not only attend the main events, but organise their own events alongside the IGF. It is doubly valuable in that each stakeholder group can use the IGF as a space for getting together and as a space to listen to and work with other stakeholder groups. A good example of this is the work being done around community-owned networks. You get practitioners, people running the networks, and you also get regulators that enable policies, governments from developing countries and the donor countries, financiers, investors and industry players who might want to support local access, but who might also be concerned at the resulting competition. Through using modalities like IGF dynamic coalitions (DCs) as well as workshops and main sessions and Best Practice Forums (BPFs), community networks managed to get their message across in the IGF. The dominant discourse is no longer “let the mobile industry take care of the last/first mile” because these community network practitioners changed the conversation through presenting evidence and well-thought-through strategies for enabling policy and regulation. If you want to influence the outcomes, you have to be prepared, organise sessions, have ideas, share materials and build partnerships.

APCNews: What would make the IGF more effective?

AE: We need more governments and businesses here, not only present in high-level sessions, but participating throughout the event, including in challenging conversations on controversial issues, such as, for example, internet shutdowns.

APCNews: What will your contribution be as chair of the IGF MAG?

AE: I will focus on building a MAG working environment where everyone feels they can contribute regardless of whether they speak English well or not, where they come from, what their gender or age is. I would like everyone on the MAG to feel ownership and responsibility.

Developing country actors should be part of the conversation, part of conceptualising the IGF. The IGF should be the place where all conversations around internet governance happening around the world are shared. I will also work hard to to make a country in the global South host the IGF in the near future. The last three global IGF meetings have been held in Western Europe – Geneva in 2017, Paris in 2018, Berlin this year – and the 2020 IGF will be held in Poland.

APCNews: How do you feel about this appointment?

AE: I believe in the IGF and in the many people and organisations from all stakeholder groups that participate in the global, regional and national IGFs. It is a great honour to have been appointed. I will do my best.