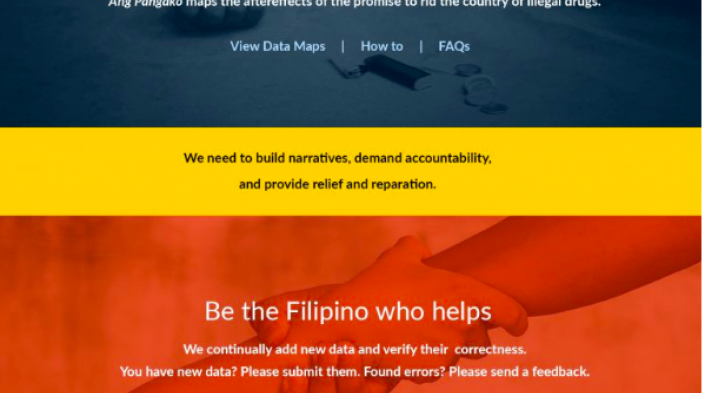 More than two years into the campaign against illegal drugs started by Philippine President Rodrigo Duterte, accountability remains a problem. To address this issue, Ang Pangako,  a website to help seek and demand accountability for extrajudicial killings, was launched during the Commission on Human Rights in April 2018. The website, created by APC member Foundation for Media Alternatives (FMA), is a repository which maps the aftereffects of president Duterte’s campaign against illegal drugs.

The project aims to become a tool to provide relief and reparation. The website features three main interactive maps: one outlining services and efforts, another offering a view of rehabilitation centres across the country, and a third mapping out the location of Duterte's victims. It lists more than 2,000 victims of the killings during the campaign against illegal drugs.

In the words of FMA Executive Director Liza García, "All information found on the website had been reported by the media since the start of the campaign in 2016, and all the sources are cited through the page." She also encouraged fellow human rights defenders to share information on drug-war victims not included on the website.

Ang Pangako was created as part of the FMA project "Data mapping of drug-related deaths in the Duterte administration", funded through the APC member subgranting programme made possible by the Swedish International Development Cooperation Agency (Sida).

Foundation for Media Alternatives (FMA) is a nonprofit NGO in the Philippines seeking to democratise information and communication systems and resources for citizens and communities. They are a member of the APC network.