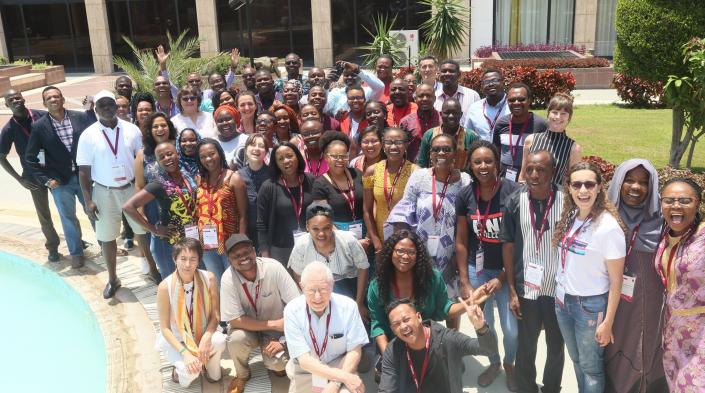 A central part of AfriSIG is hands-on learning, and the curriculum includes a rigorous practicum exercise to help fellows understand the complexity of having to research and analyse a current internet governance topic and then negotiate and develop a multistakeholder consensus position statement. At AfriSIG 2019, the fellows focused on the implementation of some of the aspects of the report of the United Nations (UN) Secretary-General’s High-level Panel on Digital Cooperation (HLPDC), The Age of Digital Interdependence.

The scenario constructed for the practicum exercise was that in each of the UN regions, a panel has been convened by the UN Secretary-General to identify the next steps in the implementation of the proposals of the HLPDC report. For the purposes of the practicum, the 46 members of the AfriSIG class of 2019 were asked to play the roles of the members of the “African Implementation Panel”, representing different stakeholder groups – government, civil society, business and the technical community – and to work together to reach consensus on an output document including the following elements:

Throughout the mock negotiation sessions, the practicum participants were assisted by mentors and co-chairs drawn from the faculty. The co-chairs, who represented the different stakeholder groups involved, were: Palesa Legoze, the former director of internet governance at the South African Department of Telecommunications and Postal Services, who worked with the fellows role-playing members of the government sector; Bob Ochieng, the stakeholder engagement manager of the Internet Corporation for Assigned Names and Numbers (ICANN) in East Africa, who was assigned to the technical community group; Lawrence Olewale Roberts, CEO of Microboss Nigeria, representing the business community; and Koliwe Majama, the AfriSIG organiser and coordinator of APC’s African Declaration on Internet Rights and Freedoms project, who assisted the civil society group. The lead chair of the practicum negotiation process was Anriette Esterhuysen, senior advisor on internet governance and global policy and strategy at APC, who has played this role during previous editions of AfriSIG.

The final output document produced through the practicum will be shared with the office of the UN Secretary-General, who is currently gathering responses to the HLPDC report. As Esterhuysen noted, the recent release of the report and this request for input presented an ideal learning opportunity for this year’s practicum participants, as well as “an invaluable opportunity to gather African voices and perspectives and communicate these to the Secretary-General's office.”

In terms of general reflections, the output statement stresses that to achieve digital cooperation, all stakeholders should not just be participants, but also be actively and equally involved in the agenda-setting process, and noted that governments play a key role in setting laws and policies. “They regulate and/or own digital technologies within their respective geographical jurisdictions and have the responsibility to ensure the provision of supporting infrastructure, such as electricity, which citizens need to access digital spaces such as the internet.” In view of this fact, the authors “strongly believe that panels such as this High-level Panel should have included more representatives from government.”

While the rest of the document is primarily devoted to putting forward recommendations on the various elements outlined above – the model to be used for digital cooperation, the role of the UN, sources of funding for the chosen model, and ways to ensure effective participation of African stakeholders in future digital cooperation – the practicum participants used the opportunity to highlight “a specific barrier to internet access and to the expansion and use of technology in Africa that is stifling the effective participation of all African stakeholders, including individual citizens,” namely intentional internet disruptions. Internet shutdowns, as they are more commonly known, have become more frequent and widespread on the continent in recent years. “We firmly believe that active steps must be taken, at the global level, to dissuade governments and other actors who perpetrate such human rights violations through network disruptions,” they declare.

The AfriSIG class of 2019, a “diverse inter-generational group of individuals from multiple sectors and stakeholder groups,” conclude their practicum output statement by pledging their commitment to “participating in and strengthening efforts to digital cooperation that result from the work of the HLPDC.”

Read the full text of the AfriSIG 2019 practicum output here.

For more coverage of AfriSIG 2019, including blog posts from class of 2019 members, visit the AfriSIG website here.