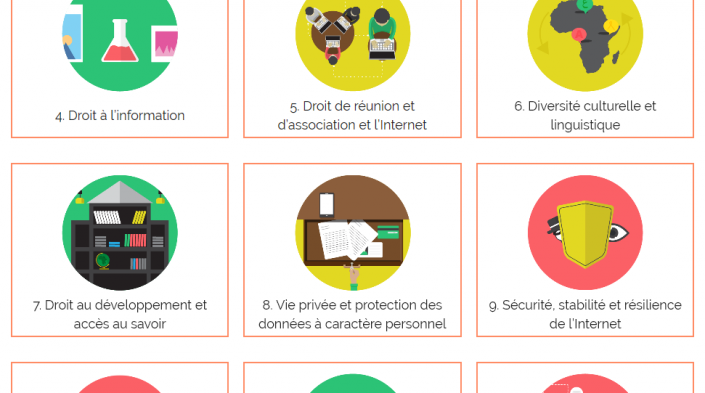 The AD is intended to elaborate on the principles which are necessary to uphold human and peoples' rights and to cultivate an internet environment that can best meet Africa’s social and economic development needs and goals. The African Declaration on Internet Rights and Freedoms interactive platform is a key tool to promote internet rights in the African region, created for human rights defenders, journalists, policy makers, and anyone interested in internet rights, particularly in the African continent, not only to engage with the Declaration by sharing resources but also to give greater visibility to internet rights in Africa.

Previously available in English and French, the AD interactive platform has recently been made available in two additional languages: Arabic and Portuguese. This is in recognition of the need to put this tool at the disposal of a larger public and to let people express themselves in a language other than English, enabling other key constituencies from African countries to engage and contribute to internet freedom in Africa.

Avis Momeni, secretary general of PROTEGE QV, an APC member organisation in Cameroon, frequently uses the AD for advocacy, and said that since the platform was made available in French, it has allowed better appropriation of the AD and its key principles. “Having the AD in all these languages helps sensitise all African users and makes them more aware of their rights relative to internet,” he explained. “It also enables African governments, on the other hand, to understand the scope of these principles in the elaboration and implementation of public policies,” he added.

Yanusa Ya'u, executive director of APC member in Nigeria, CITAD, is a fervent user of the AD for advocacy in the region. “The internet is a global platform and is most useful when people can access and use it in the languages that they are conversant with. As a key development tool, all users are key stakeholders in the shaping of the internet and the policies that guide its access and use. The AD is one key document that sets out how this can be done,” he said. “It seeks to provide a voice to the citizens not only in Africa but also globally. This reinforces the necessity of this advocacy platform being multilingual.”

Ya'u added that during his organisation's advocacy work with the AD, they translated it into Hausa, one of the most widely spoken languages in Nigeria, getting an immediate result. “People could grasp the message of the Declaration better and faster. It also made it easier to connect with the content and understand the necessity. Getting the platform in more languages will, from our experience, mean that more people will better connect with the AD and see the reason why it is a necessary advocacy tool for digital inclusion.”

Polly Gaster, a specialist in communications for development at the Eduardo Mondlane University Informatics Centre (CIUEM) in Maputo, Mozambique, was one of the editors who worked on translating the Declaration and recommended someone to revise the content of the interactive platform into Portuguese. She agreed on the importance of having the AD platform available in Portuguese as well. “When promoting and seeking support for a document directed towards the whole continent, I think it is an absolute obligation and a signal of seriousness for the proponents to ensure that the document is equally available and accessible to all African citizens, organisations and governments,” she stressed.

The five African countries with Portuguese as an official language – Mozambique, Angola, São Tomé and Príncipe, Guinea-Bissau and Cape Verde – “are obviously the primary beneficiaries of access to the platform in their own language,” said Gaster. All of these countries are members of the Community of Portuguese Language Countries, of the African Union, and of international organisations like the United Nations, while Mozambique is also a member of the Commonwealth.

Gaster pointed out that making the information on the AD platform available in Portuguese offers benefits at two levels: “On one hand, there is greater involvement of activists and organisations in those countries in advocating for the Declaration and pressing their governments to take positions; on the other, the dissemination of the document plus advocacy at government and other levels can help increase these countries' participation in relevant discussions at regional and continental levels and officially promote the goals and recommendations.”

The platform itself can be an extremely useful source of information about what is happening in other African countries with regard to, for example, the adoption or endorsement of the AD, or the experience of campaigns to support or oppose legislation or repressive moves in other countries. This in turn contributes to the strengthening of networks and increased confidence in the implementation of national initiatives.

Rafik Dammak, a member of ICANN's Generic Names Supporting Organization (GNSO) council focusing on policy, participated in the translation of the Declaration into Arabic, and concurred that the expansion of the number of languages in which the AD is available will yield more inclusive engagement. He emphasised that since the AD includes legal terminology, for example, it may be preferable for non-native English speakers, regardless of their mastery of English, to refer to the translated version in order to avoid misunderstanding the meaning.hile English can be used by hardcore activists, a more general awareness needs localisation of the content, and therefore, availability in other languages,” he said. “Having the AD in Arabic is appealing,” he added, “and would be perceived positively by many from the Middle East, especially since it is legitimate as a matter of principle for many.”