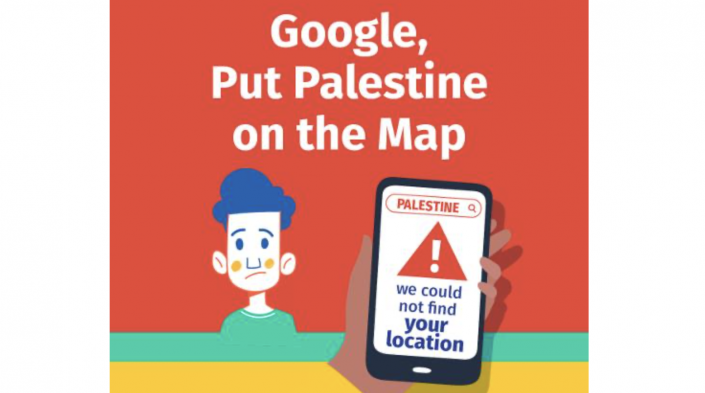 This article was republished from 7amleh.

In a context where land is subjugated to the colonial ruling and continuous dispossession of the indigenous people contrary to international law, Google holds immense power as the largest source of digital geographic data in the world, to shape and legitimize certain interpretations of the physical world and the politics that underpin it. Because human rights extend into the digital sphere, the ways in which this physical world is represented in online maps can even run counter to the exercise of the most basic and essential human rights. By disregarding the existence of Palestine, mapping unlawful Israeli settlements, and neglecting proper mapping of the Palestinian areas, supports misinfomation and forming a public opinion which serves the unlawful practices and policies of the Israeli government and contradicts Google's responsibilities under the United Nations Guiding Principles on Business and Human Rights.

Google Maps route planning services disregard the movement restrictions imposed on Palestinians by the Israeli occupation such as Israeli military checkpoints, roadblocks and the Apatheid Wall, putting Palestinians lives in real-life danger. Instead, Google Maps is adopting the Israeli narrative of space, which is illegal under international law. This includes recognizing all illegal Israeli settlements in the occupied Palestinian West Bank and annexed East Jerusalem as Israel’s capital and shaping the maps to facilitate the movement of illegal settlers instead of the Palestinians. As a result, Palestinian users often end up in dangerous areas such as  Israeli military zones, checkpoints and settlements, when using Google Maps route-planning services. This in turn endangers their lives, as they are subjected to getting shot or arrested by the Israeli army or settlers when attempting to enter an illegal settlement.

Furthermore, many communities marginalized by the occupation and under constant threat of demolition and forced displacement, such as Khan al-Ahmar, can only find their homes on Google Maps when zooming in to a very high degree. This is contributing and assisting the planned and systematic erasure of these areas, not only from maps, but very concretely forcing families out of the land by the Israeli occupation, which prepares to de jure annexation of these areas according to the Israeli government plans and greenlighted by Trump administration’s "Deal of the Century".

Palestinian civil society coalitions, comprising of the undersigned Palestinian organizations and networks working in the fields of human and digital rights, urges Google to abide by international law and human rights standards, and implement the recommendations of the "Mapping Segregation - Google Maps and the Human Rights of Palestinians” report published by 7amleh - The Arab Center for Social Media Advancement in 2018. These recommendations include adding Palestine to Google Maps in accordance with the United Nations General Assembly Resolution 67/19, and providing a certain level of detail in Google Maps’ representation of Palestinian villages and towns as is applied to other parts of the world. It is crucial for Google to recognize and mark the illegality of Israeli settlements on its maps. Additionally, Palestinian civil society organizations call on Google to clearly recognize and display all movement restrictions including road blocks and roads where access for Palestinians is restricted due to the unlawful Israeli occupation and settlers and offer alternative routes and directions for Palestinians residing in the West Bank that takes into account the restrictions of their freedom of movement.