How are APC partners improving their communities' lives? In this column we're highlighting stories of those working to create local impact and change, supported by APC subgranting. The feminist project Nodes that Bond has developed circles of women with an emphasis on technology at Portal sem Porteiras, a rural community network in Brazil. When the pandemic became a barrier to their in-person methodology, creativity and care were their way to overcome challenges.

Souzas is a neighbourhood inhabited by around 500 people on the Monteiro Lobato city in the Mantiqueira forest region in Brazil. It is also the home to the Portal sem Porteiras (PSP) community network, one of the initiatives that received a catalytic intervention grant through the project Connecting the unconnected: Supporting community networks and other community-based connectivity initiatives.

With the goal of making the community network truly collective, PSP have to deal with structural and historical gaps in the technology and access fields. “That is when we brought gender and technology into the conversation. When we set out to do that, our first challenge was to get women to engage in actions and dialogues about a universe that seemed alien to them,” explain Luisa Bagope and Marcela Guerra in the Nodes that Bond Workbook – a publication put in place to share more information on the project’s methodology with the hope of inspiring others.

To start, Nodes that Bond implemented a simple but effective approach to get women involved in the local network: “We envisioned a circle composed of women where we could speak our minds and expose our questions. This way we could learn while and through being together,” add Luisa and Marcela. 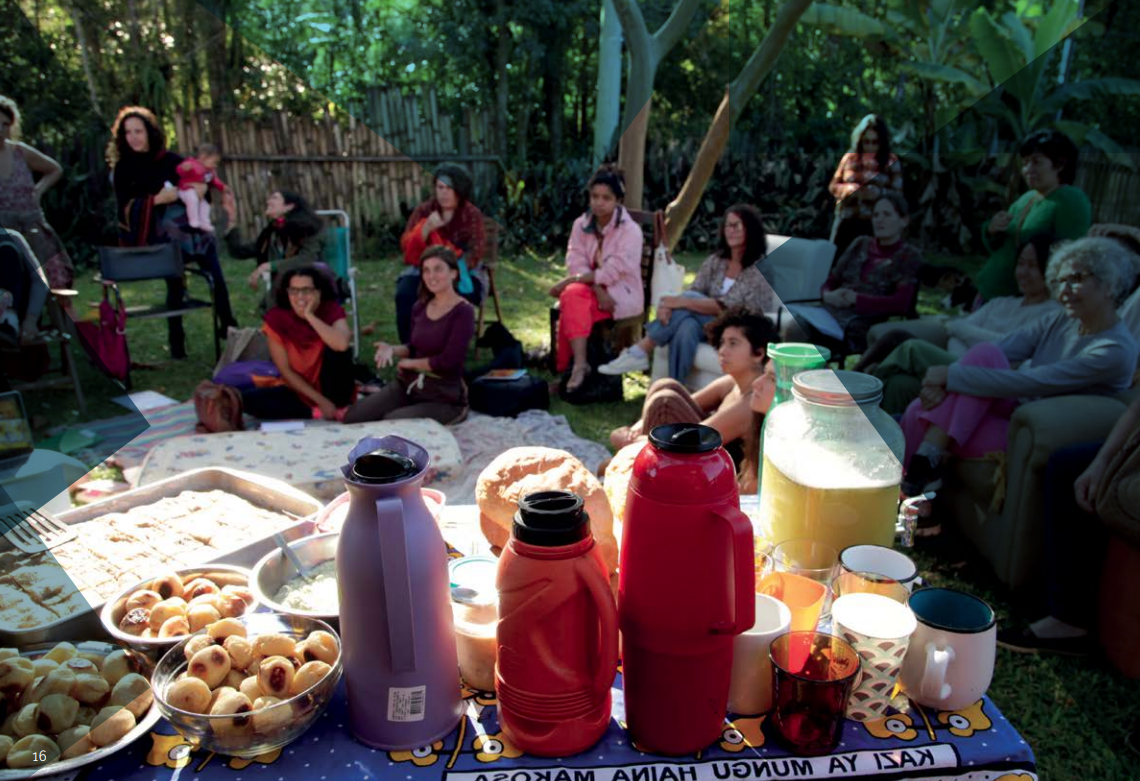 Nodes that Bond circle of women. Photo: Luisa Bagope (from the project's Workbook)

Being and learning together proved to bring about meaningful impact in the case of this community network. The circles were developed over six months in 2019. At the initiative's final evaluation, almost 61% of the local women in the circles indicated that this was the first PSP activity in which they had been involved. The digital care practices also increased after the circles and the women present at the meetings remained active in major roles inside PSP, informs the Workbook.

Beyond the circle of women, Nodes that Bond also have a research and content creation arm composed of a team of local women who are anthropologists, artists and active community members. According to the project’s newsletter, these researchers were engaged in fieldwork, going to community women and interviewing them. The process of gathering women's stories in Souzas inspired another initiative under the project: the women's map – an online feminist map that can only be accessed from PSP intranet and territory.

“Each researcher interviewed, photographed and filmed selected women from the neighbourhood, and our web designer transformed the ideas, materials, symbols and meanings into our online feminist map,” explains the newsletter. "In the map, each node represents a different woman, and when you click on a node, you open a page with the woman's interviews, their stories, pictures, symbols.”

The map was received with curiosity and enthusiasm by Portal sem Porteiras participants. In this collective story created from the women's map experience, they discuss this further: “It was Monday morning when I left home towards the square to buy bread. I usually do this every day, and it takes about ten minutes. But that Monday would be different: buying bread in a small shop on the corner of the square became, to my surprise, a long 3-hour walk,” they describe in the story. "During the short walk, people greeted me, pulled subjects and asked questions. Everyone wanted to know more about how to access the local network, see their scanned portraits and the stories of women.”

Overcoming challenges in the pandemic: Sounds that bond

As a community network, PSP faced huge challenges in the face of the COVID-19 global pandemic in 2020. Besides all the public health and social concerns that the Brazilian population faced, for the women from PSP the new context meant that meeting face-to-face for the women’s circles was no longer safe.

On the Nodes that Bond website, they summarised: “Our interactions changed abruptly and we had to think about how to replace the encounters with women. Online meetings were not feasible." It explained furthermore, “Participating in a video gathering had very little to do with the feeling of intimacy that we had lived in the circles before. We kept asking ourselves what to do. How to keep connected in some way during this difficult time?”

Nodes that Bond came up with two creative solutions: the development of monthly podcasts, called Nodecast, and the creation of the “Secret of the Mountain” audio novella –  a fictional story written and produced by women in the PSP community network and freely inspired by the many accounts shared between them. By hearing each other's voices coming into their homes, they could keep feeling close while navigating through challenging times and continuing to seed change.

This piece is a version of information highlighted by Portal Sem Porteiras as part of the project "Connecting the Unconnected: Supporting community networks and other community-based connectivity initiatives" for the Seeding Change column, which presents the experiences of APC members and partners who were recipients of funding through APC's catalytic interventions grants, and of subgrants offered through other APC projects and staff working on subgranting in the organisation.