This piece was originally published by APC member EngageMedia.

At the second Video for Change Environmental Impact Lab, EngageMedia continued to work with six amazing film projects contributing to environmental justice in the Asia-Pacific. This time around, the focus of the Impact Lab was on maximising the participating films’ potential for creating impact in their communities. EngageMedia also introduced to the Lab an impact campaign builder template that aims to help participants visualise and kickstart the process of designing impact campaigns around their films.

Over the course of the Impact Lab, mentor Hollie Fifer and Greenpeace Philippines Country Director Lea Guerrero shared their networks and experiences working in impact production, and brought case studies, theory, and real life examples of how impact is created through film.

Leah Borromeo, another of the Lab’s seasoned mentors, emphasised that allocating budget for impact production can open doors and make it possible for filmmakers to think big. Budget, however, isn’t everything. Impact Lab participant Joanna Vasquez Arong, for example, also shared that budgets should not stop anyone from making positive contributions to the communities their films highlight. She used her film Ang Pagpakalma sa Unos (To Calm The Pig Inside) as an example, where she worked with no impact budget and was essentially a one-woman show.

Last but not least, participants also learned how crucial networks and strategic partnerships can be to impact campaigns. One strategy to forging these important connections is by incorporating a highly participatory approach right from the get-go, ensuring there is space for anyone to join and become part of the change being sought. 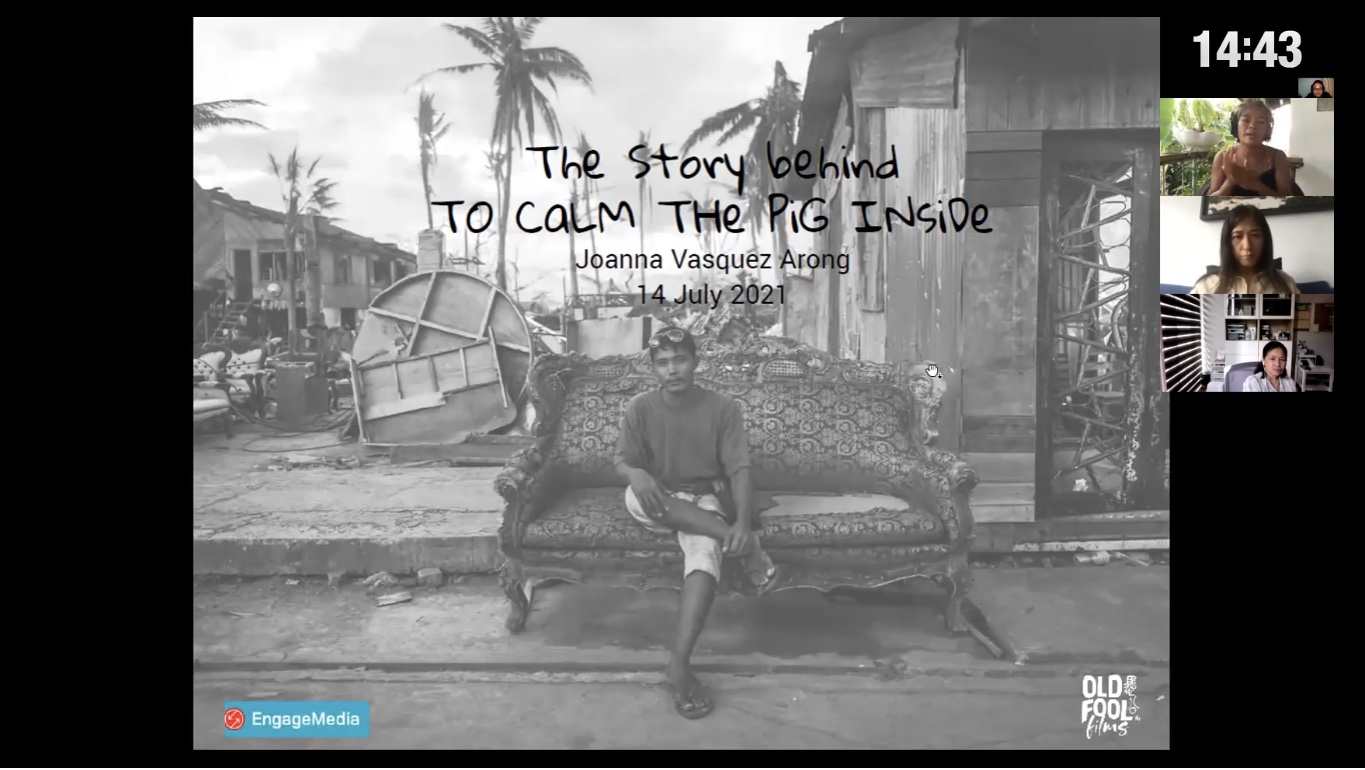 Impact Lab participant Joanna Vasquez Arong presents her film to the rest of the participants.

What do participants have to say?

With the second Impact Lab nearing its end, the participants share their main takeaways from the three-month course:

1. Arden Rod Condez, director of Hunting Season (in production), a feature-length documentary film about the role forest guards play in protecting the Northwest Panay Peninsula National Park in the Philippines:

"Joining the Lab has provided clear and definite guidelines on the step-by-step process of impact production. I already know some of them, but the lab has coined terms and laid down formulas to make the process more concrete."

2. Onarisa Sapsompong and Jeanne Tanwarat, impact producers of Mountain of Trash; a short documentary about the harmful effects of a communal dumpsite in Chonburi, Thailand:

"The Impact Lab gave us the framework [for] how we should plan our impact production strategy, as well as [connected] us to a network of environmental activists and filmmakers."

3. Gladys Llanes and Pia Duran, producers of Bantay Bukid (in production); a feature-length documentary about the struggle of indigenous people to protect the endangered Philippine Eagle in Mindanao, Philippines:

"Now, we always think of ways not just to do our filming but how our ways of filming can impact the community we are working with."

"The Lab [helped] us to make our campaign target clearer. The campaign builder is really helpful."

"The mentors gave precise examples of organisations or people to possibly approach to connect with to see if there’s a possibility to explore collaboration." 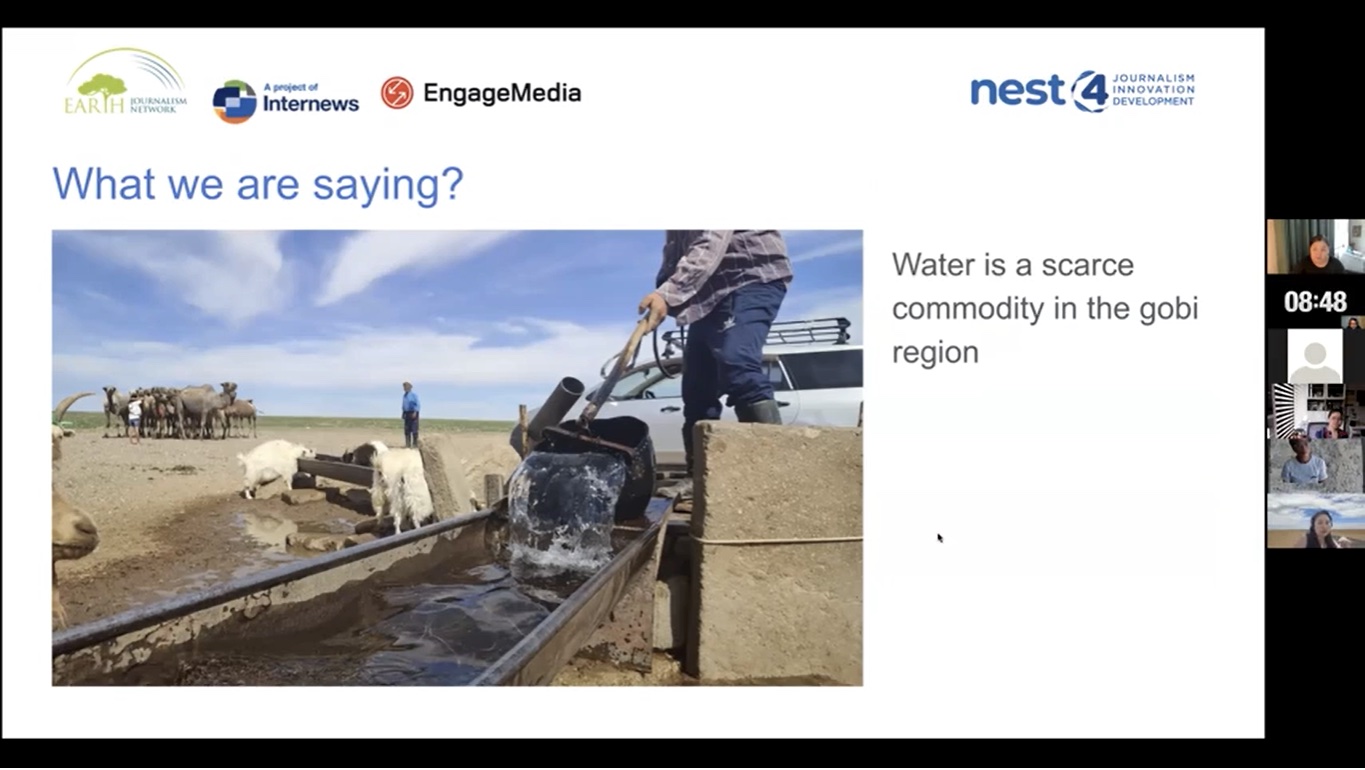 Impact Lab participant Dulamkhorloo Baatar shares the topic of her film with the other participants.

Beyond the sessions and impact campaign template, the Impact Lab also paved the way for new opportunities for the participants.

Thanks to sharing our networks in the Lab, Ang Pagpakalma sa Unos was selected to be part of the 2021 Climate Crisis Film Festival, which will coincide with COP26 proceedings in Glasgow later this year.

Dulamkhorloo Baatar, a participant from Nest Center for Journalism Innovation and Development, is also already using what she’s learned from the Lab. In partnership with the Earth Journalism Network, Dulamkhorloo is currently training local journalists to use video to capture stories about the harmful effects of Yellow Dust Storms in Mongolia and beyond. This mobile journalism project, Enemy from the North: Yellow Dust Storms, is currently in production.

The second Impact Lab ends this August. For more information on the participants’ progress, check out their respective websites and social media.