Community Networks Stories: A rainbow of contents in the sky

Home / APC Talk / Community Networks Stories: A rainbow of contents in the sky

As part of the “Connecting the Unconnected: Supporting community networks and other community-based connectivity initiatives” project, 11 community network initiatives were selected in 2019 to receive catalytic intervention grants, aimed at supporting innovative, sustainable and gender-aware uses, developments and appropriations of technologies to strengthen a diverse and sustainable community network movement. Specifically, these grants aimed at exploring activities that were advancing community networks around the role of women within networks, collaborative mechanisms for dispersed communities to work together on open source tools, improved access to spectrum, local content development and technological innovation. You can find more detail on the different types of initiatives funded here.

Over the coming weeks, we will be sharing stories from the participating community networks about the local impacts of the work they carried out with the help of this funding. Today’s story comes from Blanca Cruz from Telecomunicaciones Indigenas Comunitarias A.C. (TIC A.C.) and Redes por la Diversidad, Equidad y Sustentabilidad A.C (Redes A.C.) from Mexico. TIC A.C, along with the Unión de Cooperativas Tosepan – a network of cooperatives with more than 35,000 members made up by Nahua and Tutunaku people from the northern Sierra of Puebla – and Redes A.C., have been working together for more than a year in order to create a full communication strategy which includes an autonomous cellular mobile telephony network and self-built and self-managed internet infrastructure, as well as community radio and creation of local contents.

It was raining on Tuesday. In Kalnemachtiloyan, an educational project organised by the Tosepan Titataniske Union of Cooperatives, the planting of corn was scheduled for Wednesday. One of the most important days of the year. Parents, children, teachers, agricultural advisers, and anyone else who wants to join in, come to the school to plant the seeds in the surrounding plots. I called the teacher early and asked, "If it keeps raining, will the planting still go on?" "Yes," she replied. When they arrived, everyone wore raincoats or sheets of plastic as if it were the most natural thing in the world. But the rain stopped, as if it had merely been preparing the soil and waiting for planting time, to take a break. Thus, the corn was planted on a beautiful, calm, cloudy day, in an atmosphere of organisation, discipline, community spirit and joy.

Activities like this were the prelude to a larger event scheduled for Saturday and awaited eagerly throughout the entire region of the northern sierra of Puebla and Veracruz: the 31st Regional Assembly of the Masehual, Tutunaku and Mestizo Peoples, at which an agreement reached in previous assemblies would be put into action – to forge ahead in the construction of Life Plans.

The days passed and the clouds cleared up, preparations moved forward. On Thursday, youngsters couldn't play basketball on the esplanade of the Kaltaixpetaniloyan training centre like they did every afternoon, because the CECAMBA (Band Music Training Centre) youth band was rehearsing the short concert with which they would open the assembly. The band is made up of children and young people for whom music has become a path to a new sense of order in their thoughts, emotions and dreams.

But on Friday, instead of instruments and chairs, the esplanade was populated with boards, tools and screws. The group of young people in training on the theme of energy sovereignty was building a small, collapsible hut with bamboo that would be their information stand at the assembly. The plan was to put up an autonomous energy system with a bunch of light bulbs, to show people that cables and poles bringing electricity from thousands of kilometers away are not always necessary.

The women from La Sandía Digital were also taking part in the work. They had come that morning to complete a video on three projects on energy sovereignty. Carrying out this type of work is no small task. Communicating what is happening among the Indigenous peoples is actually one of the most important actions in life, as is sharing food when it is ready to be tasted. This is what goes on in the Indigenous territories: there are processes for preparing delicious stews, regional assemblies or the community planting of corn. It becomes not a right but an obligation to share them with the world, to talk about what is being done, built, woven.

And it all starts at home. In other words, internal communication is a priority.

That same afternoon, young people from the Tosepan Limakxtum Radio Station and Toltekayot Yeknemilis University, both projects promoted by Tosepan, had met. They started the faena, an ancient Indigenous tradition of collective labour for purposes of social utility. Although this faena seemed different, as it did not involve clearing roads or fixing a school, it was aimed, like all faenas, at forging paths for Buen Vivir, “Good Living”, this time based on technology. The 1st Technological Faena proposed installing a community intranet for the assembly. "Slowly, we're in a hurry." They would start by preparing a basic virtual browsing experience (like the one involving the light bulbs at the energy sovereignty booth), which would allow users to download files and take them to their communities without using the global internet and without the need for mobile data.

The group reviewed the reasons for this intranet: to replicate and spread an initiative that is being implemented in various remote, Indigenous communities, and to show the assembly what it means for technology to be placed at the service of life and to become a tool for Buen Vivir, or Yeknemilis, the Nahuatl word for the same concept, where solidarity, reciprocity, respect and diversity are reflected in a "virtual" experience.

It was dark by the time the contents and texts in Nahuatl were ready. The name given to the network would be Matat, which means net. The next thing to do was to look for bamboo in the dark to serve as the masts for the so-called “LibreRouters” (another story of freedom that we will tell you another day). That was followed by deliberations on how to make them stand up. Everyone soon settled on sand-filled cans that we borrowed from the building materials cooperative. We went to the atrium of the Cuetzalan church where the giant tarp was just being assembled, and left our newly designed router holders in place. 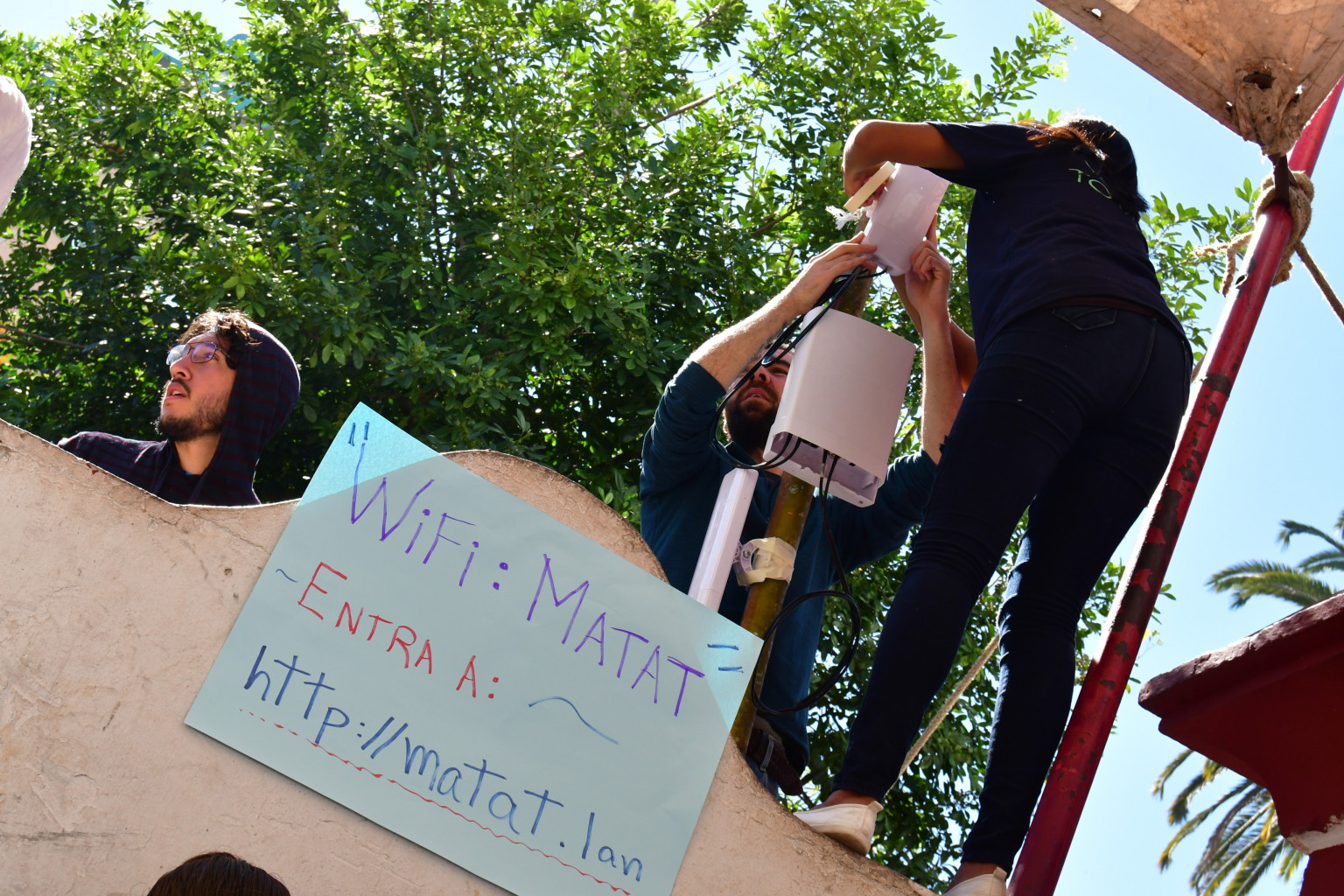 The joy among the young people was palpable, with emotions running high. "How do you feel?" I asked them. "Happy! This is the most beautiful thing of all," replied Lorenzo. A few hours earlier Joana had shared with me: "I never imagined that technology could help unite my community."

Things always become clearer once you start moving. The group went back to their homes, when the night announced a meteor shower. At Abelina's house it was not exactly easy to rest. Another family faena was going on there: Aunt Hilda was preparing the tamales in the kitchen to cook them early on the stove and take them to the assembly. She is a member of her local cooperative, which along with more than 20 other cooperatives was hosting this assembly and was in charge of providing food and water. Whoever hosts the gathering takes care of the guests.

Another part of the team had stayed in Kalta to solve technical details concerning the platform. A difficulty had arisen: the Raspberry Pi (the microcomputer carrying the contents) could not be easily linked to the three LibreRouters that would be mounted to cover the entire esplanade. Friends in Argentina, Brazil and India involved in community networks were sending advice to solve the problem. It would seem that this is what technological faenas are like: they lead us to transcend common borders and re-inhabit, on the basis of cooperation, the biggest territory: Earth. It was 3 o'clock in the morning and we decided we had better get some sleep. There was a sense of concern. If this was not solved, the network would only cover a small corner of the esplanade. We went out to feel the night and the strength of the moon, and from the centre of the sports field we watched a star fall.

Finally the day we'd been waiting for. After dawn the sun was shining brightly and the sky was clear, the fog that sometimes fills the atmosphere had disappeared and the horizon could be seen clearly. In the following hours, with the same clarity, the Indigenous peoples would also glimpse a horizon for their territory.

The remote technical advice continued arriving. With complete confidence that the links would be resolved, part of the group installed the LibreRouters. Interestingly, it was Vivi and Abelina who put all the effort into setting them up, aligning them, and even putting together their own extension cords. Karlita often says: the sustainability of community networks largely depends on women. The technological faena demonstrated this. While they were busy, the CECAMBA concert nourished the spirit, enlivened the heart. The energy sovereignty stand was almost ready. Just a few minutes before the assembly was to start, Karlita jumped up and down with excitement and shouted "It's done!" I had never seen her so happy. All the routers were linked and could be accessed from any point on the esplanade. 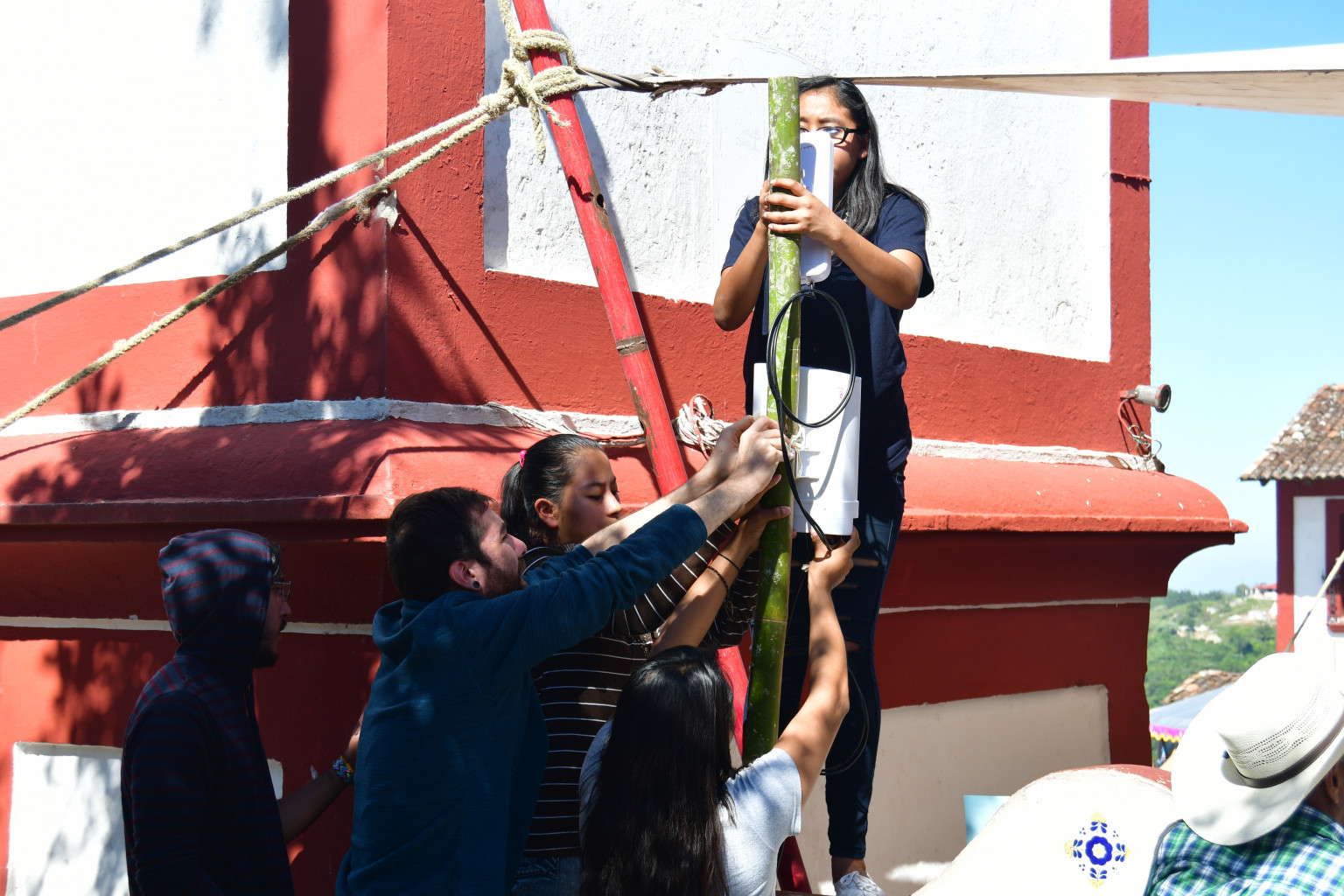 A man asked, "Excuse me, do I need to have data?" When something is ours we set the terms of the exchange. This was a collaborative exercise, a Tamakepalis of contents. You could download and also share files. About 3,000 people came. Many were able to participate and experience the intranet, with its satisfactions and also its frustrations, just like everything else, but now appropriated as something of their own, to solve and make it grow in the times to come.

The assembly addressed essential issues, starting with water and our relationship with it. A water ritual connected all of us. Not precisely to the Matat network but to the Network of Life. From the music and the water we were filled with inspiration, and words from the heart also flowed through the air: to speak of community Life Plans means returning to dreams, to what we want. That implies the responsibility of taking on everything: the process, the tools, the results. It means doing things our way, under the principles of life. It means moving away from the level of complaints and difficulties to the level of actions, of faenas, of interwoven networks, of "we can do it". That is autonomy.

That is when it is most convenient to call on technology to come and help us, so we can tell it how it can contribute to Good Living. And then we can walk together towards a new day, one of faenas for rivers with clean water on earth and a rainbow of contents in the sky.

All photos courtesy of Redes A.C.

About the project: Telecomunicaciones Indígenas Comunitarias, A. C. aimed to establish rules for spectrum-sharing on a secondary basis in the region, as well as to design and implement a new LTE mobile network in Mexican indigenous communities. The initiative also included the design and development of an intranet platform and local content production as well as a distribution strategy for this.
Topic:
Community networks
Region:
Global
Latin America & the Caribbean
APC-wide activities:
Local access and community networking