Celebrating 15 years of GISWatch: "At the service of more just, equitable and sustainable societies"

This is the fifth installment in the series celebrating 15 years of APC’s publication, Global Information Society Watch (GISWatch), exploring the origins of this powerful project while looking toward the future. We connect with Pablo Accuosto, the project's first coordinator, who explains how GISWatch developed into a groundbreaking publication and fundamental source of information.

In full disclosure, had I not been told that this year we celebrate GISWatch's 15th anniversary, I would not have been able to remember the precise year. I remember, however, the context in which the project originated, driven by the fact that, at the final stages of the World Summit on the Information Society (WSIS) preparatory meetings, it had became evident for civil society organisations participating in the process that it was necessary to develop concrete actions to inform the shape that the WSIS follow-up would take.

The WSIS process had taught us that it was essential to put a foot in the door of the spaces in which emerging information and communications technology (ICT) governance mechanisms were being decided – both in terms of the form that they would take and the problems that were to be addressed by them. Not least, for our voices to be heard, our participation in these spaces needed to be legitimised by the support of a strong community of like-minded actors, including social movements and academic institutions.

In fact, the debate over the participation of multiple stakeholders – and, in particular, civil society organisations – in the implementation of the WSIS commitments had been at the centre of attention for a long time when the summit concluded. It was therefore natural that the issue of participation was chosen as the focus of the first number of GISWatch. We had also learnt from the WSIS process that it was not only going to be necessary to make sure that we could be present at these spaces, we also had to come up with concrete, clearly stated and evidence-backed contributions for our positions to be taken seriously in the negotiation processes, and GISWatch was enthusiastically welcomed by many civil society players involved in the WSIS process as a much-needed initiative that could contribute to address some of these goals. 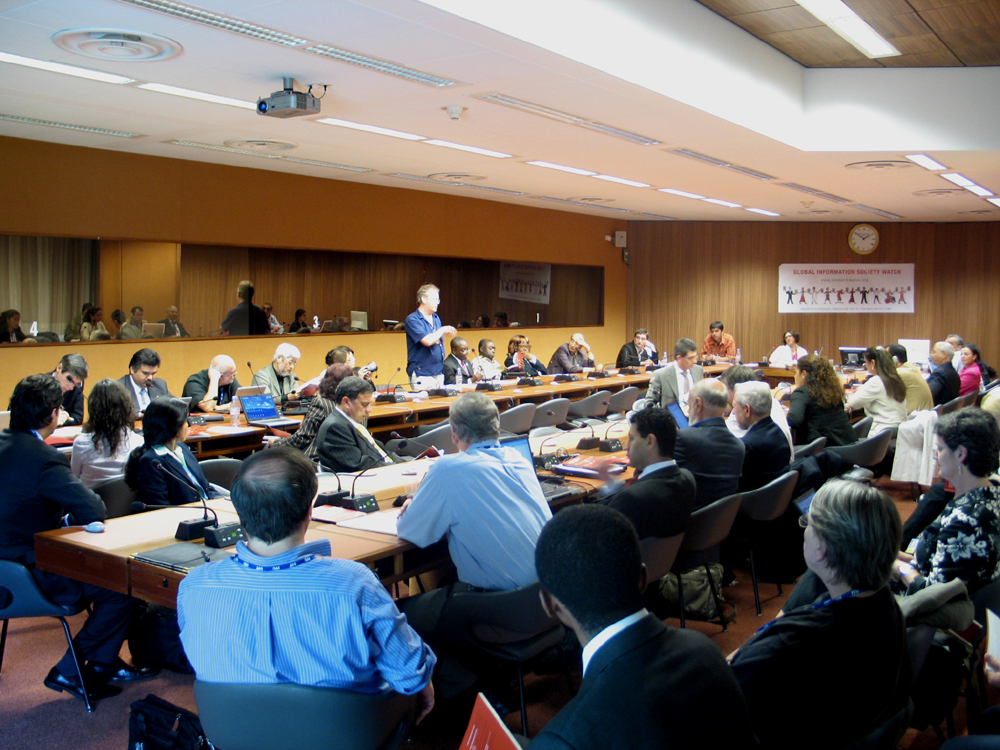 [Image by Pablo Accuosto: "According to the agenda of the second WSIS follow-up cluster of activities, the launch of the first issue of GISWatch took place on 22 May 2007, at room XXVII of United Nations' Palais des Nations, in Geneva. It was a corner room with no windows at the basement of the UN headquarters. And it was packed."]

After the two phases of the WSIS summit, APC was in a good position to have a leading voice in the post-WSIS scenario: it had built up a high level of credibility and its inputs to almost all of the main the issues being discussed were valued by almost all stakeholders involved in the process. APC had contributed significantly to the preparatory meetings with thorough analysis on difficult topics; it had put forward, for instance, innovative strategies for minimising disparities in interconnection rates in and between the South and the North, and it had fed into the discussion new perspectives for tackling the much-discussed issue of how to finance the deployment of internet infrastructures in the South, based on the principles of public goods economics.

APC had also made valuable contributions to the discussion on the new global internet governance architecture that would have to be put into place to meet the WSIS agreements, advocating for mechanisms in line with the Geneva Declaration of Principles, in which governments had reached a consensus on the need "to build a people-centered, inclusive and development-oriented information society."

It was therefore to be expected that APC would play a key role in the articulation of post-WSIS initiatives aimed, on one hand, at translating the somewhat vague WSIS political agreements into concrete actions and, on the other hand, at monitoring their fulfillment. As mentioned by Anriette Esterhuysen and Alan Finlay, GISWatch had also antecedents in initiatives led by APC Uruguayan member Instituto del Tercer Mundo (ITeM): on one hand, ITeM had coordinated for several years Social Watch, a global initiative aimed at holding governments and international organisations accountable for the fulfillment of national, regional and international commitments in the areas of social development and gender equality. On the other hand, ITeM had also been active in the WSIS process and, with the support of the International Development Research Centre (IDRC), had contributed to the issues being discussed with position papers that were presented at various workshops in the preparatory process. These papers were then collected in the book "Information society for the South: Vision or hallucination?", which was launched in Tunis during the second phase of WSIS. 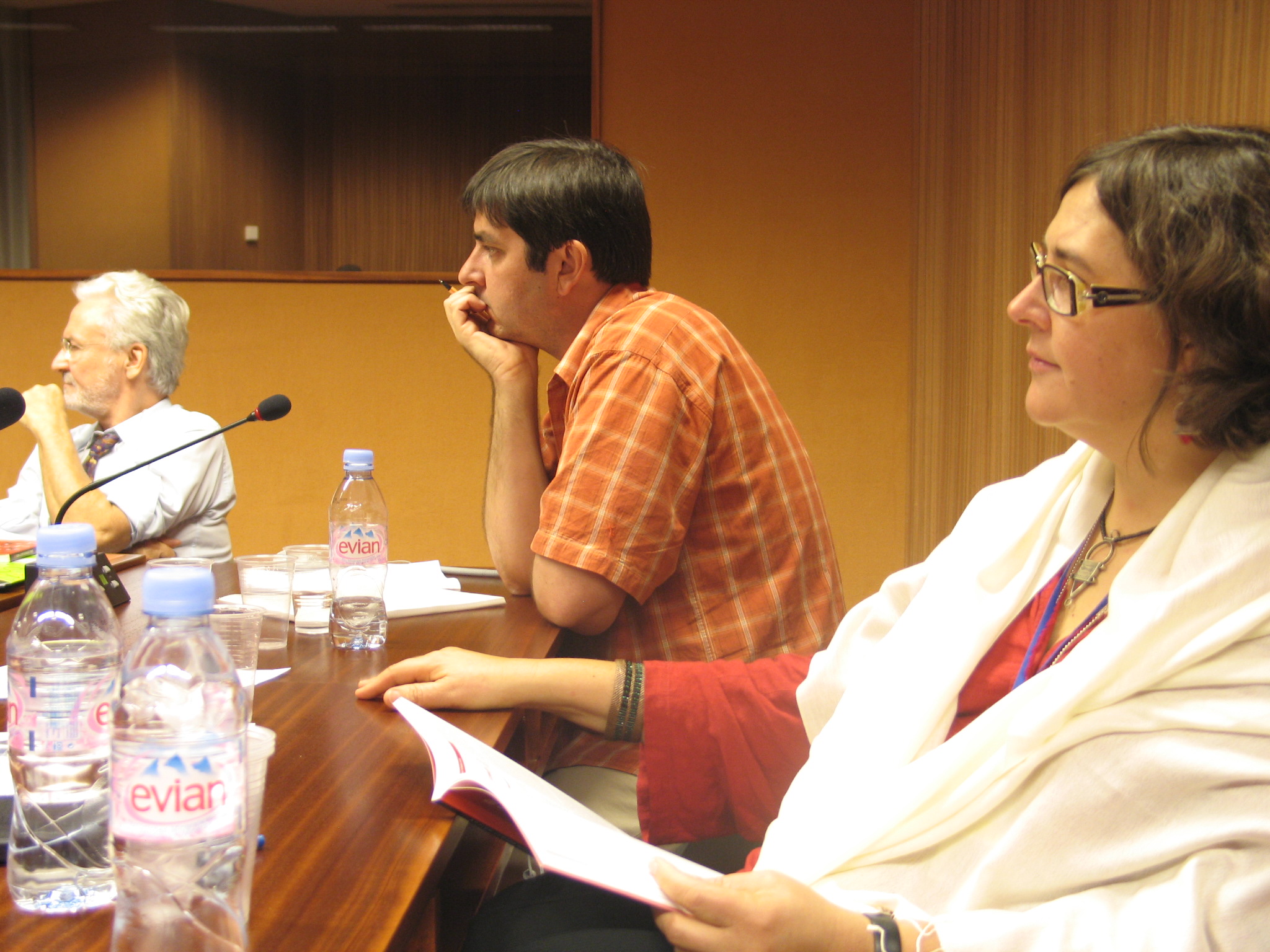 [Image by Pablo Accuosto: Anriette Esterhuysen and Alan Finlay participate in the launch of the first edition of GISWatch in 2007.]

The WSIS process had, therefore, contributed to strengthen the position of APC and some of its members in the global ICT policy arena. But it had also entailed difficulties for APC internally, as the dynamics of its participation in complex negotiation processes underscored its duality as both an organisation and a network. At the same time, some member organisations – particularly those with a history closer to grassroots action – did not fully visualise the relevance of APC's participation in global policymaking spaces such as the WSIS.

This context, together with the fact that APC had been expanding rapidly in terms of the number and diversity of its members around the years in which the summit took place, made it necessary to develop new initiatives that could build bridges between different levels of political action and, in this way, contribute to consolidate the network. GISWatch had the potential to be such an initiative. As Anriette Esterhuysen mentions, the unstated aspiration of getting all network members involved in GISWatch proved more difficult than anticipated. I firmly believe, however, that beyond the fundamental contributions made by GISWatch in the definition, implementation and monitoring of ICT policies, one of the greatest successes of the initiative has been, in fact, to bring the APC community together year after year after a common goal and with a shared focus for political actions.

It is also relevant to highlight the role that GISWatch has played in the strengthening of capacities within APC members, both in terms of conducting research that leads to a deep understandings of complex problems, as well as in relation to enhancing the skills, abilities and resources of organisations to participate in the definition and monitoring of ICT policies developed to address these issues. GISWatch authors contribute, through their action-oriented research, to a better understanding of the relations between local, regional and global dynamics, which, in turn, plays a fundamental role in improving evidence-based policies at multiple levels. In the process, and as an important side effect, GISWatch authors and their organisations become authoritative voices on essential policy issues, and they renew their credentials to participate in local policymaking processes, where political decisions more directly affect citizens. 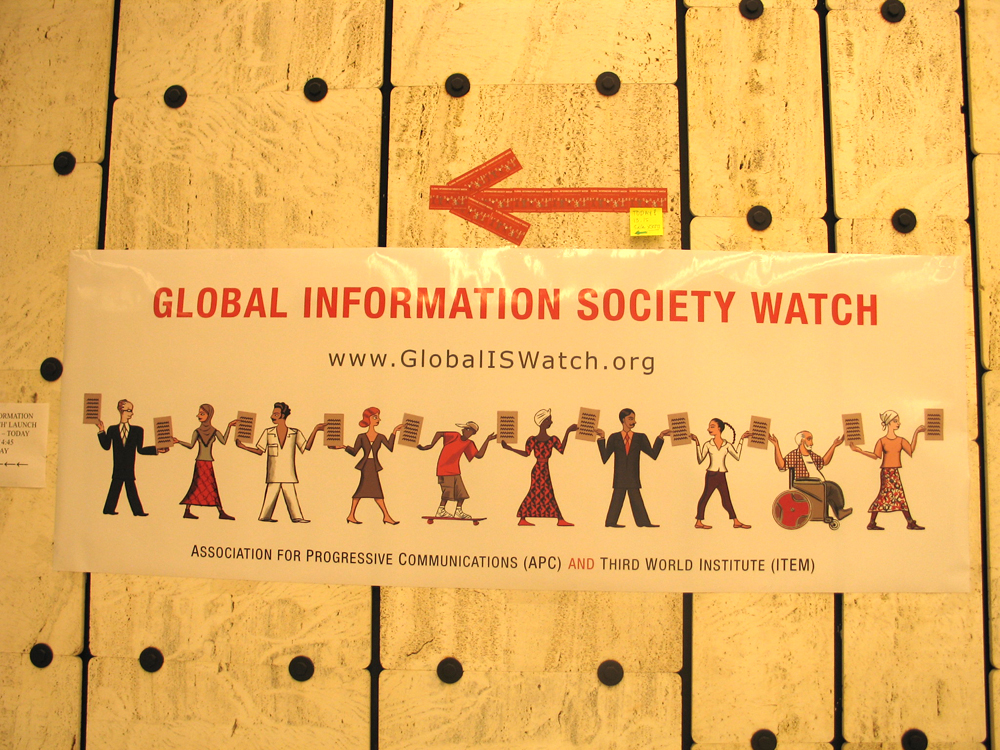 [Image by Pablo Accuosto: A sign points the way to the launch of the first edition of GISWatch in 2007.]

We can safely say, therefore, that after fifteen years GISWatch is an important pillar in the context of all the initiatives carried out by APC and its member organisations to place information and communications technologies at the service of more just, equitable and sustainable societies. Moreover, it has become a fundamental source of information for anyone interested in rich, multi-layered analyses of complex ICT policy issues from a human rights perspective.

On a personal note, I am deeply grateful to APC for having given me the opportunity to participate in GISWatch in its infant years. I join the celebrations for its fifteenth anniversary and send my heartfelt congratulations to all those that have been involved in it in one way or another, either conducting research, writing articles, editing, proofreading, translating, illustrating or disseminating the GISWatch publications.

To many more GISWatch editions to come! 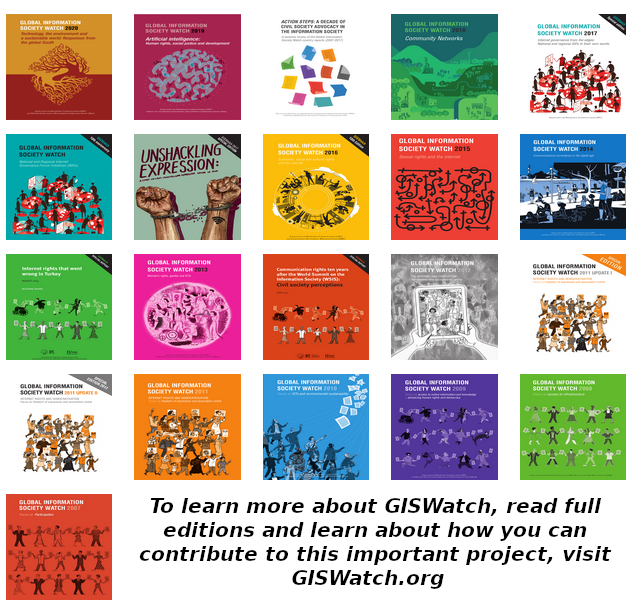