Eiko Kawamura has been working in the field of information and communications technologies (ICTs) in Cusco, Peru since 1997, when the internet didn’t exist.

She began with the Cusco al Mundo (Cusco to the World) project at the Bartolomé de las Casas Centre, as the head of web development, and is considered the first woman webmaster in Peru. She then worked with the Peruvian Scientific Network, carrying out various functions, including mailing list management, web project development and content management. It was during this time that she began, on her own initiative, to participate in national and international telecentre conferences, in addition to producing a Spanish-language newsletter where she compiled information on ICT for development (ICT4D). She subsequently worked at the Pontificia Catholic University as web development coordinator for the university. She then went on to join the ICT4D team at the Peruvian Social Studies Centre (CEPES), where she was the communications coordinator for the Latin American region of the Telecentre.org Foundation, participating in international events and carrying out communications and support tasks for the Foundation. After this, she worked in the Department of Information Technology of the Ministry of Education of Peru, as communications coordinator. Finally, until March 2017, she worked for the Antonio Ruiz de Montoya Jesuit University with the Edugestores project, aimed at improving educational management in the country.

In all of these projects Eiko has worked with different platforms and applications, handling their operation, content and statistics. She has also served as a consultant for numerous ICT4D projects. Since April 2017, she has been a member of the Peruvian Institute for the Information Society (IPSI). The aim of IPSI is to contribute to the strengthening and development of the information society in Peru and the region, through research and projects involving the use and integration of ICTs. 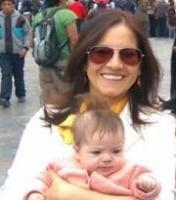