Shutdown order against Rappler must be revoked immediately

Accueil / Publications / Shutdown order against Rappler must be revoked immediately 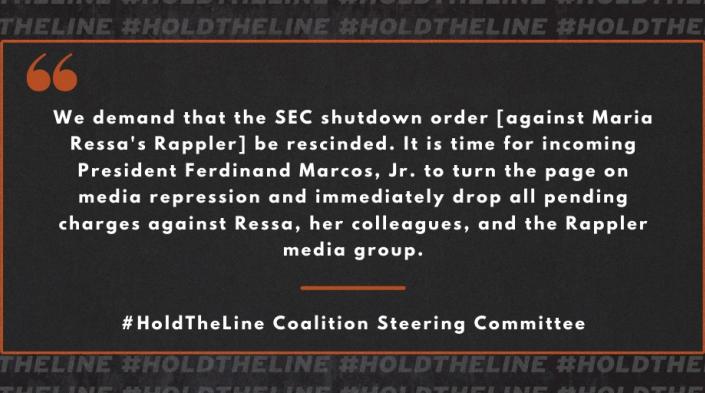 The Hold the Line Coalition condemns the historic shutdown order against Rappler approved by the Philippine Securities and Exchange Commission (SEC) this week. By reinforcing an earlier decision to revoke Rappler’s certificates of incorporation, the ruling effectively confirms the shuttering of the independent news outlet.

“The SEC shutdown order is part of a multi–pronged attack by the Philippine authorities designed to permanently silence Rappler and its founder, Nobel Laureate Maria Ressa. It also marks an escalation in the years-long pressure on the few remaining independent news publishers in the Philippines,” the HTL Steering Committee said.

“We demand that the SEC shutdown order be rescinded. It is time for incoming President Ferdinand Marcos, Jr. to turn the page on media repression and immediately drop all pending charges against Ressa, her colleagues, and the Rappler media group, and take concrete measures to improve the broader media freedom climate in the country.”

The SEC’s order revoking Rappler’s license to operate is the first of its kind in history – both for the Commission and for Philippine media. The news outlet has publicly announced its intention to fight  the decision, handed down in the final two days of the Duterte administration, through every available legal avenue. Duterte’s administration has prioritized persecuting Maria Ressa and her news organization, Rappler.

Maria Ressa, her colleagues and Rappler face a sustained campaign of legal persecution and online violence with seven ongoing cases that range from trumped-up tax charges to cyber libel accusations that threaten to shutter Rappler and carry potential prison penalties for those charged. In April alone, in the run up to national elections, 16 new complaints – some of which have since been dismissed by the courts – were filed against Ressa and the news organization she co-founded a decade ago.

The Philippines is ranked 147th out of 180 countries in Reporters Without Borders’ 2022 World Press Freedom Index.