The Attacks on Palestinian Digital Rights 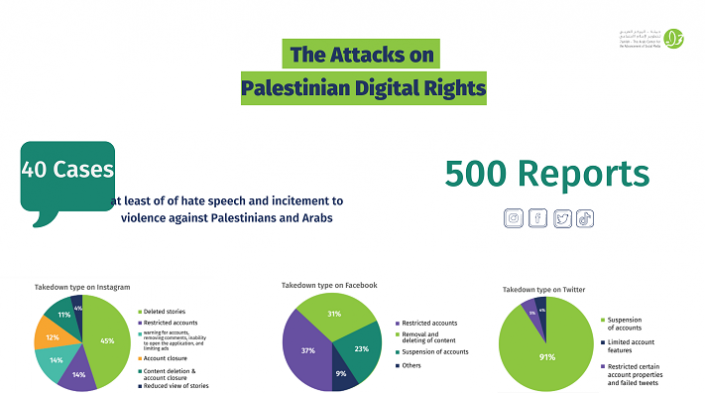 From 6 to 18 May, 2021, 7amleh - The Arab Center for the Advancement of Social  Media worked to document and respond to the digital rights violations occurring during the 2021 Israeli attacks on Gaza, on Palestinians in mixed cities in Israel, and forcible displacement of Palestinians in East Jerusalem as a part of ongoing ethnic cleansing of Palestinians. There has been a dramatic increase of censorship of Palestinian political speech online, coupled with increasing examples of hate speech and incitement against Palestinians, including organising of violent Israeli lynch mobs online. This pattern of censoring Palestinian and Arabic political speech, while allowing hate speech directed towards Palestinians and Arabs to remain online, is exacerbating the human rights violations already occurring on the ground and is preventing people from exercising their fundamental rights and documenting violations.

Since the beginning of May, Palestinian groups have been demonstrating against the Israeli Supreme Court’s decision to forcibly displace Palestinians in the East Jerusalem neighbourhood of Sheikh Jarrah, in favour of Israeli settler organisations and companies. Through social media, the families of Sheikh Jarrah and human rights groups gained attention from Palestinians in Israel, the occupied Palestinian territory and international supporters who mobilised to protest against this decision. When peaceful protests were met with Israeli police brutality and extremist Israeli settler groups started organising lynch mobs on WhatsApp and Telegram, leading to the killing of two Palestinian citizens of Israel, injuries and arrests of hundreds, Palestinians took to Facebook, Instagram, Twitter and TikTok to document and denounce the human rights violations, reporting and sharing cases of censorship, publishing statements, petitions, letters, social media videos, infographics and other forms of digital activism.

Mass takedowns are being carried out by social media companies

Starting on 6 May, social media companies started removing Palestinian content from platforms, often without clear reasons or violations. Many of these cases are likely related to the Israeli Ministry of Justice’s Cyber Unit, which has been reporting thousands of cases to social media companies without legal proceedings and without the knowledge of citizens or those living under Israeli occupation in past years. On 13 May, the Israeli Minister of Justice and Israeli Minister of Defence, Benny Gantz, met with social media companies and called on them to remove Palestinian content which “incites to violence or spreads disinformation,” and emphasised the importance of responding quickly to appeals from the governmental cyber bureau and proactively removing content, further intensifying the censorship.

This unauthorised and unchecked power wielded by the Israeli state, allows it to govern online speech and censor people who do not align with the political views of the state. At the same time, despite repeated documentation of hate speech and incitement to violence against Palestinians by extremist Israelis online, these groups continue to be spreading disinformation and organising violent attacks online. Although some platforms have made public statements about the censorship of Palestinian political speech, their claims have only focused on “technical issues”, which is not sufficient explanation for the pronounced rate and type of censorship that digital rights advocates have documented. In addition, no company has made any statement regarding the need to address the issue of incitement to violence against Palestinians on their platforms.