In defense of freedom of expression and the right to communicate: Intervozes' public note on the 2018 presidential elections in Brazil

Accueil / Publications / In defense of freedom of expression and the right to communicate: Intervozes' public note on the 2018 presidential elections in Brazil 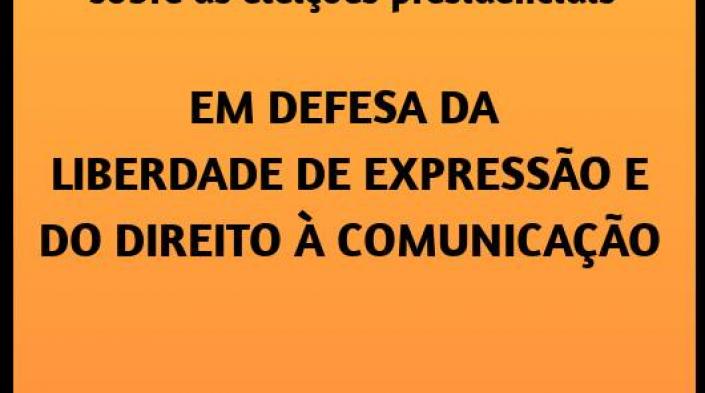 In light of the result of the second round of elections, Intervozes – Coletivo Brasil de Comunicação Social is publicly expressing deep concern about the choice made by the majority of Brazilians who went to the polls this Sunday, October 28, and who elected Jair Bolsonaro (PSL) for the Presidency of the Republic.

It is public knowledge that the president-elect has made repeated statements of a racist, misogynist and LGBT-phobic nature, and that he openly defends the civil-military dictatorship established in the country between 1964 and 1985. As a federal deputy and later as a candidate, Jair Bolsonaro was not embarrassed to present as an idol Colonel Carlos Alberto Brilhante Ustra, former head of DOI- CODI of II Army and first military man condemned by the Brazilian Judiciary for the practice of torture. His claims to use of torture methods are available in any digital network search.

Bolsonaro also expressed his opposition to political activism, promised to end the free organisation of NGOs and to banish his opponents from the country. Political activism is a salutary and legitimate practice in democracies. It is from this that civil society organises itself to participate in the political life of the country and contribute to improving the quality of life of citizens, through different sectors such as health, education, environment and housing, among many others. To prevent activism is to censor society itself and prevent its organisation.

Thus, as an organisation that has been active for 15 years in defending freedom of expression and political expression and in advocating for the right to communicate, in a commitment to consolidate democracy and promote human dignity, Intervozes considers that the election of Jair Bolsonaro imposes several complex challenges for our field.

First, the president-elect does not have a history of respect for the work of the press and of communicators in general. There are several cases of aggression against journalists denounced by networks such as Fenaj, FNDC and Abraji in recent years, which he and his advisers and supporters have warned about during the electoral process. Violence against anyone who proposes to find out facts and bring them to the population is violence against democracy, and cannot be ignored.

In his first interviews after being elected, Bolsonaro signaled the use of official advertising funds as a purchasing instrument for payment of political support and punishment of critical channels, to the detriment of historically adopted technical criteria.

We are also concerned about the president-elect's statement about the intention to privatise all Brazilian public companies, which includes Empresa Brasil de Comunicação (EBC), a new forum for public communication in Brazil that needs to be valued and improved, not delivered to private capital. This Monday (29 October), Bolsonaro spoke explicitly about closing EBC. Intervozes advocates for public communication as a necessity in a democratic country, as provided for in our Constitution, which establishes complementarity between the public, private and state broadcasting systems.

The vision of Bolsonaro and his team on public communication policies is another aspect to consider. His government's program totally ignores the issue. In public statements, the current President of the Republic has shown ignorance about mechanisms for democratic regulation and the fight against media concentration that have existed for decades in countries such as France, the United States, Germany, Japan, Canada, etc. In a contradictory position, on the one hand, he compared the historical struggle of the movements for the democratisation of communication with attempts at censorship and, on the other hand, he used close relations with owners of large radio and TV distribution companies to receive privileged and illegal treatment during the campaign.

Finally, the opinion of the candidate, who has opposed the Civil Internet Framework since 2014 – a law that has become a global reference in guaranteeing rights such as access, privacy and freedom of expression in networks – also leaves us on the alert. After an electoral process marked by the illegal use of personal data of internet users and by the massive dissemination (not yet held accountable by the justice system) of disinformation, false news, slander and defamation by the networks, it is fundamental that civil society looks for threats that violate the digital rights of citizens, which may multiply.

We hope, therefore, that the new government respects the Federal Constitution of 1988, guaranteeing freedom of expression, the right to organise and the free expression of thought and all other fundamental rights set forth in Article 5 of our Constitution. We also hope that Brazil will keep in line with the international treaties and conventions ratified by the country in the framework of multilateral organisations such as the United Nations and the Organization of American States (OAS), respecting, in particular, the commitment to the principle of non-regressivity of human rights.

Together with hundreds of popular organisations and movements that are guided by the defense of these rights, Intervozes will remain vigilant, in the networks and on the streets, in defense of our freedoms and democracy. We will still be alert to the actions of the media, which have contributed so much – through action or omission – to the rise of the far right in the country. We do not give up the freedom of expression of all Brazilians and Brazilians. Shut up never!