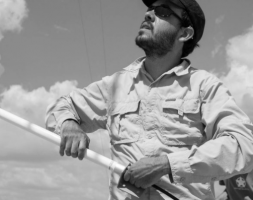 Peter holds a BA in Urban Studies from the University of Pennsylvania and a Master’s degree in Rural Development from the Autonomous Metropolitan University in Xochimilco, Mexico. He was the founder in 2002 and ex-director of Juntos, the first organisation in Philadelphia dedicated to organising and defending the human rights of Latino immigrants. In 2009, Peter began working in Nigeria as a development consultant and media maker and lived in the Niger Delta region for two years, co-founding the Media for Justice Project based outside of Port Harcourt. Since 2009, Peter has been coordinating Rhizomatica, an organisation that he started in order to promote new communication technologies and that helped create the first community-owned and managed cellphone network in the Americas in 2013. Peter is both an Ashoka and Shuttleworth Foundation fellow since 2014. For his work on telecommunications and community development, in 2015 he was named an MIT Technology Review Innovator under 35 and to Foreign Policy’s 100 Leading Global Thinkers list.