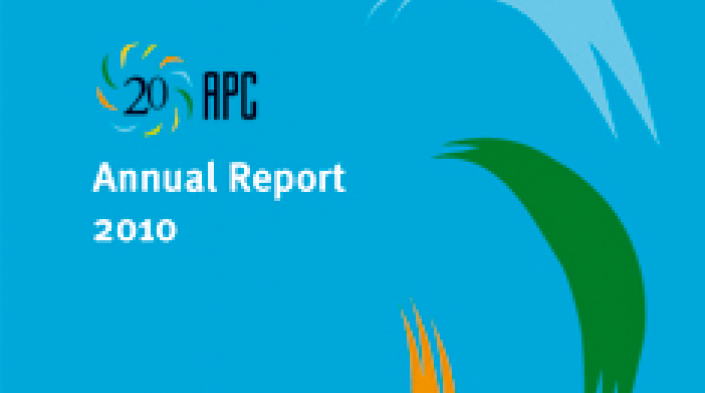 In 2010 APC’s Take Back the Tech! fund disbursed almost a quarter of a million dollars to over sixty grassroots women’s rights organisations in twelve countries. It is one of the very few forward-looking small grants funds specifically funding technology initiatives to fight violence against women. This and other initiatives are covered in APC’s latest annual report.

“I didn’t know that this camera can also change my life. It can be a friend, but more than a friend, it is like a future,” said one violence survivor who lives at the Saartjie Baartman Centre, a refuge in South Africa, which won a small grant. The group went on to record digital diaries collected on a DVD which is being used to train counsellors.

New research to bring affordable internet to everyone

Wireless spectrum could be a new way of providing affordable internet connectivity to millions however policy and regulation is often ill-informed and secretive. In 2010 we published research into how spectrum is five countries with different approaches to spectrum or where regulation is in flux. People are crying out for information about spectrum. On the basis of the research we wrote short articles that synthesised the policy gaps and the potential for growth which have garnered thousands of readers. Next we’ll be doing more research in Latin America and develop a Citizen’s Guide to the Airwaves.

The free flow of information on the internet is being restricted all over the world. But its intensity and impact is greatest in countries lacking a democratic culture or strong human rights regimes. People risk their lives when they challenge oppression and oppressors frequently order internet and telecoms blackouts. We work with group who experience these threats on a regular basis.

In 2010 we approached the UN Human Rights Council as a potential new venue for internet rights advocacy. It’s part of our worldwide campaign, Internet Rights are Human Rights to ensure that people who are defending human rights can be free to use online communications without fear of arrest or censorship. Already APC is making sure that more governments support the HRC’s important work around freedom of expression online.

The APC Annual Report 2010 also features highlights from some of APC’s 50 members around the world, 80% of whom are from developing countries. The Delhi-based Digital Empowerment Foundation (DEF) is working with traditional Indian weavers so that they can effectively use computers for creating fabric designs. Fantsuam Foundation in rural Nigeria provides students with visual impairments with computer access and training. Jinbonet in South Korea is fighting government attempts to censor the internet.

And with APC celebrating twenty years officially online, we tracked our history from the early 1980s till now. There’s also a history clip you can watch in English, Spanish or French.

Find out the difference that APC is making in the world by reading the APC 2010 Annual Report.