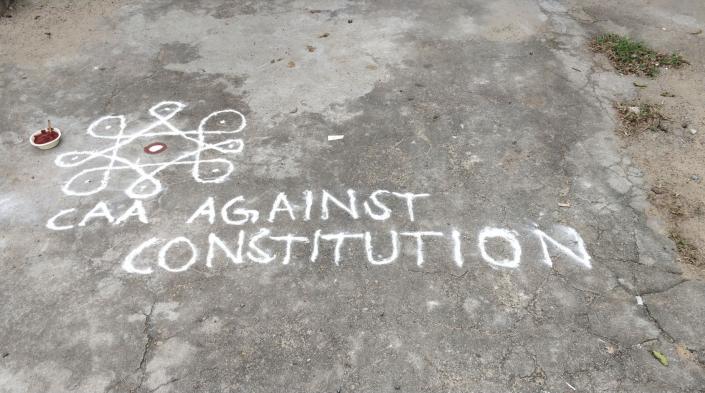 Over the past few years, individuals living in India have experienced a sharp decline in the space available for exercise of human rights, particularly the right to dissent. Since early December 2019, peaceful protests have erupted throughout India in response to the adoption of the controversial Citizenship Amendment Act (CAA) and the targetting of religious minorities. In response, India has witnessed large-scale violence against dissenters, police excesses, and a clampdown on freedoms of religion and expression as well as assembly and association. This has been propelled by state complicity and rampant hate speech in media and online spaces.

Passed in early December 2019, the CAA – which amends the existing citizenship legislation – excludes Hindus, Sikhs, Buddhists, Jains, Parsis and Christians from Afghanistan, Bangladesh and Pakistan who have been resident in India since before 2014 from the status of "illegal immigrants", and expedites their path to citizenship. The Amendment does not extend the same protection to atheists and Muslims, including minority sects, from these three countries.

The CAA, read in conjunction with the National Register of Citizens (NRC) and the National Population Register (NPR), has put India’s 200 million Muslims on high alert. The NRC, which is set to be implemented nationwide, is an exercise in registering every single person in the country in a single database, with the onus of proving citizenship on individuals through often hard-to-find ancestry documents. Incendiary remarks made by India’s Home Minister Amit Shah, linking the CAA and the NRC and calling Muslim migrants "infiltrators" and "termites", has further heightened fear of the impact of both the CAA and NRC on Muslims and other marginalised groups. This joins a growing list of controversies spurred by the Bharatiya Janata Party (BJP)-led government, which is accused of pushing a Hindu-nationalist agenda and discriminating against religious minorities.

International groups and experts have also expressed their concerns in relation to this discriminatory legislation and have opined that the CAA undermines India’s secular constitution, which ensures the right to equality for all persons and does not list religion as a criterion for citizenship. The UN Office of the High Commissioner for Human Rights (OHCHR) has called the CAA "fundamentally discriminatory in nature". According to the OHCHR, the amended law would appear to undermine the commitment to equality before the law enshrined in India’s constitution and India’s obligations under the International Covenant on Civil and Political Rights (ICCPR) and the Convention for the Elimination of Racial Discrimination (ICERD), to which India is a state party and which prohibits discrimination based on racial, ethnic or religious grounds.

Restrictions on the right to freedom of assembly online and offline

There has been a severe clampdown on the right to protest across India. Dozens of people have been killed and thousands have been arrested amid demonstrations in India against the CAA. The UN Secretary-General expressed concern about the Indian government’s use of excessive force and urged full respect for the rights of freedom of opinion and expression and peaceful assembly.

There have also been prolonged network shutdowns as a result of the protests, with the government shutting off internet service or restricting internet use in nine states, affecting over 300 million people. In some places, messaging services were also suspended, leading to an almost complete communication blackout. This has severely restricted the ability of protesters to express their dissent and mobilise both online and offline. As stated by APC, there have been approximately 381 instances of internet shutdowns in India since 2012.

Meanwhile, although prior permission is not a requirement for protests, in several cities such as Chennai and Hyderabad, restrictions on the right to protest have taken the form of requiring written authorisation for protests, which is ultimately denied. By denying applicants permission to protest, the police are forcing individuals to protest without permission and subsequently filing cases against them or holding them in detention. There have also been multiple instances of repeated imposition of Section 144 of the Criminal Procedure Code, which entails prohibition of movement or assemblies, in a number of jurisdictions, as a means to thwart anti-CAA protests. This practice has been met with severe criticism by courts, despite which restrictions continue.

The authorities are also creating hurdles for the exercise of the right to assembly by creating restrictions in the movement of traffic in areas such as Shaheen Bagh in Delhi – where a peaceful sit-in has been in progress since 15 December 2019 and continues to date – by deliberately closing off adjacent roads, as a result of which the public is inconvenienced.

Activists and protesters who are voicing their dissent in public despite these hurdles have been met with detentions and arrests. Several human rights defenders, critics and protesters have been held in detention and subsequently released while others continue to remain in prison. The Indian state has also filed cases against several thousands including artists for unlawful assembly for voicing their dissent against the discriminatory laws. Many have been arrested for social media posts on CAA and in support of protesters, with over 124 arrests in December 2019 alone for allegedly posting “inciting” messages on social media, including arrest and custodial torture of an activist for uploading videos of police excess on Facebook. The protests have also been marked by an increase in protesters being charged with a colonial-era sedition law for their legitimate expression.

Anti-CAA protests, which have been largely peaceful, have been subjected to unlawful and violent police action across India. On 15 December 2019, the police engaged in large-scale excesses against students of the Jamia Millia University in Delhi, where they entered different parts of the university including the reading hall in riot gear and beat up students, resulting in bloodshed, grievous bodily harm and severe physical injuries. In the last week of February 2020, riots broke out in the national capital resulting in the death of 40 individuals, mostly from religious minorities. The police failed to control the confrontation between pro- and anti-government protesters and were found to have aided the pro-government groups in unleashing violence. The failure of the state to take action against erring officers has been repeatedly raised by civil society. For instance, following the violence and killing of protesters in Mangalore on 19 December 2019, over 20 persons were detained ultimately resulting in the Karnataka High Court releasing them after noting excesses of the police and the need to take action. Similarly, on 14 February 2020, the police engaged in "lathi charge" and violence against peaceful women protesters in Chennai, which ultimately resulted in spontaneous protests breaking out throughout the state. In the latter case, the police officers, instead of facing action, have been provided with protection and given promotions.

One of the most significant contributors to the ongoing violence against protesters and religious minorities is the rampant hate speech perpetrated through online and offline mediums by influential political actors. Examples range from the prime minister’s statement on being able to identify protesters based on the clothes they wear, to calls for shooting down "traitors" by BJP campaigners during recent elections, to declarations by a chief minister on seizing private properties of protesters, to reminders of the disparity in the number of Hindus and Muslims in India, to calling Muslim migrants infiltrators and termites and outright calls to unleash violence on protesters, all of which has played a pivotal role in inciting violence. These calls are made by key political actors, including the prime minister and home minister, and then amplified on social media and mass media by their sympathisers. News media has particularly played a central role in vilifying progressive voices and protesters, branding them as anti-nationals and enhancing the hostile situation that persists. These calls have directly resulted in the recent riots in Delhi and the torching of four mosques where right-wing groups hoisted saffron flags on top of one of the ruins. Following the call to shoot “traitors” by members and ministers of the BJP government, at least two incidents of gunshots against protesters by Hindu nationalists were recorded. Despite the repeated calls for action against hate speech, including a call by the High Court of Delhi, the state continues to evade filing charges against the individuals perpetrating hate speech and inciting violence. The impact of this hate speech is being felt most by Muslims and other minorities in the country. The violence in New Delhi at the end of February caused hundreds of Muslim families to flee the capital, leaving them unsure of their return.

The Association for Progressive Communications (APC) calls on the states at the 43rd session of the UN Human Rights Council to urge the government of India to: