Philippines in the Universal Periodic Review: Misrepresentations and myopic responses 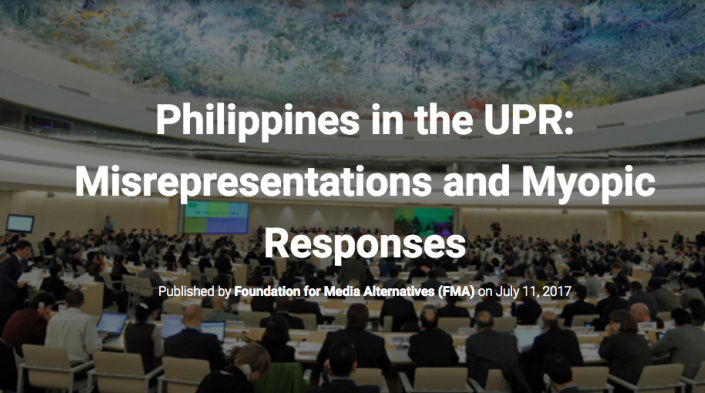 This year, the Philippines is undergoing its third Universal Periodic Review (UPR) before the UN Human Rights Committee (HRC). The Foundation for Media Alternatives (FMA) submitted a UPR stakeholder report on the state of digital rights in the Philippines together with the Association of Progressive Communications (APC), as well as another submission on the right to privacy together with Privacy International (PI).

The Digital Rights submission, titled Human Rights and the Philippine Digital Environments, presents the legal and regulatory frameworks and issues in the areas of freedom of expression and online libel, freedom of expression and sexual rights, online gender-based violence, online child sex trafficking and online child pornography, and the right to privacy. The report also brought to light emerging issues in the Philippine digital landscape, such as continued barriers to women’s access and participation online and pending legislative proposals to allow wiretapping and interception of communications in support of President Rodrigo Duterte’s infamous war on drugs.

The stakeholder submission with PI highlights four main areas of concern: oversight and accountability of police and intelligence agencies (or the lack thereof), data privacy protection by the government, a problematic cybercrime law, and the privacy implications of currently proposed bills such as those to establish mandatory SIM card registration and a national ID system.

Meanwhile, the National Report submitted by the Philippine government trumpeted the ongoing campaign against illegal drugs as a major accomplishment of the Duterte administration, perhaps as a defensive tactic to counter international backlash against the campaign as being violative of human rights. The National Report says that the government, “in protecting the right to life, health, and personal security of our people, has embarked on a rights-based campaign to eliminate the drug menace.” Ironically, this supposed “rights-based” campaign is one that has so far resulted in more than 8,000 deaths due to drug-related extrajudicial killings (EJKs).

The main UPR session for the Philippines was held on 8 May 2017 in Geneva and was attended by the Philippine delegation led by Senator Alan Peter Cayetano and Deputy Executive Secretary Menardo Guevarra, marking the first time that the Philippines was represented by both the executive and legislative branches.

The Philippine Commission on Human Rights (CHR) hosted a livestream of the session, which was attended by various human rights and civil society organisations. Although 53 stakeholder reports from various civil society groups in the Philippines as well as from the CHR were submitted, most of the comments from the other member states during the UPR session focused on the spate of EJKs in the country. Senator Cayetano, who was President Duterte’s running mate in the 2016 elections, predictably denied that the killings were state-sponsored. He also chastised the CHR and local media for supposedly misrepresenting the state of human rights in the country vis-à-vis the president’s all-out war on drugs. This effort to disprove global conceptions of drug-related killings in the Philippines is also notable in the National Report, as well as in the state media’s coverage of the UPR process. The National Report goes so far as going into a discussion of operational definitions to say that the deaths condemned as human rights violations are technically classified as homicide or murder and not as EJKs. After the UPR session, the state-run Philippine News Agency reported that 95 member states were convinced that there are no EJKs in the Philippines. The report cited Department of Interior and Local Government Assistant Secretary Epimaco Densing III as the source of this snippet. However, fact-checks revealed that Densing never made this claim.

Other issues that were raised by the member states were the death penalty, forced disappearances, torture, lowering the age of criminal responsibility, and violence against women and children – but not a single comment was given on the state of digital environments in the country. This is a significant gap in the overall recommendations, especially considering that much of the culture of violence propagated by the war on drugs spills into the realm of digital and communication rights, as reflected in both of FMA’s stakeholder reports.

Nevertheless, despite the lack of recommendations addressing our concerns, FMA in coordination with APC and PI plans to continue efforts to advocate for protecting human rights in the Philippines. We continue to hope that the Philippine government as well as the international community will begin to recognise that protecting human rights online is just as important as protecting them offline, and that a free, open and safe digital environment is indispensable for the general protection and promotion of human dignity and human rights.