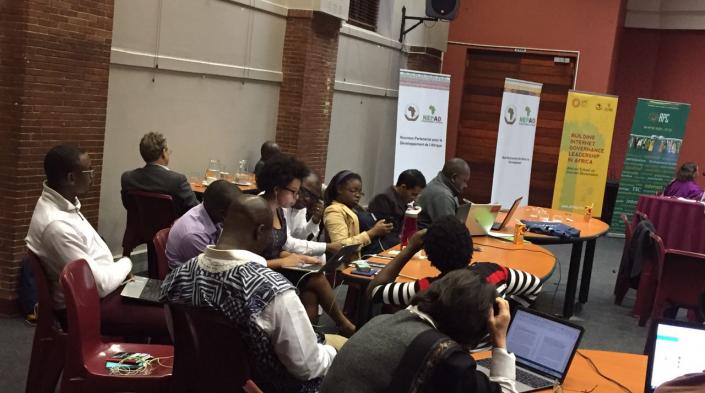 The fourth edition of the African School on Internet Governance (#AfriSIG2016), co-organised by the Association for Progressive Communications (APC) and the New Partnership for Africa’s Development (NEPAD), took place from 11 to 15 October 2016 in Durban, South Africa. This year’s AfriSIG produced a total of 44 graduates, all of whom were very engaged in one way or another. At the beginning of the school, while some participants had extensive knowledge on internet governance and were ready to share, others knew very little about the topic and were eager to learn.

The five-day event covered the topic of internet governance, and provided a thorough overview of the institutional landscape, as well as addressing its correlation with human rights and development, cybersecurity, multistakeholder approaches and emerging issues (see the detailed programme for more information).

There was also a practical segment of the lessons called the practicum. Its purpose was to give participants a chance to experience a multistakeholder decision-making process in a realistic simulated environment, using available methods, while discussing a current issue of importance to internet governance. This year, the issue addressed was internet shutdowns. Participants were randomly gathered into four different stakeholders groups as defined by the Tunis Agenda: business, civil society, government and the technical community. Each of these groups had to produce an initial statement, after which the four statements were merged – with the help of the team coaches and faculty – into a single statement, including all the stakeholders’ recommendations. This enriching exercise yielded the Final AfriSIG 2016 statement on an intentional internet shutdown.

According to Avri Doria, coordinator of the practicum, “One of the essential ingredients in a successful practicum is the degree to which the participants commit themselves to the roles they are playing in the exercise. This often requires consultation with others in the school and online research. This group did that well. They used the internet and each other to build their characters and their policy positions.”

Something that all the faculty members agreed on was the outstanding level of participants’ engagement during the school – not only in person but also online, through their intense activity on social media during the event. And the learning outcomes were quite immediate, since a good number of the AfriSIG alumni were either panellists and/or rapporteurs in many sessions during the African Internet Governance Forum, which took place immediately after the school. They were even given a platform to present the multistakeholder statement they had all produced on internet shutdowns.

Anriette Esterhuysen, executive director of APC, stressed that “AfriSIG is different from any other internet governance learning event that I know of. It encourages participants to ask questions, to think critically, and to not take anything for granted. By integrating the Gender and Internet Governance eXchange it puts gender issues on the agenda, and by linking to the African IGF, participants are able to apply their knowledge and confidence immediately as panellists and rapporteurs in a real-life policy forum. Through the practicum it builds hands-on experience in consensus building; experience of how challenging it can be to find common ground without losing sight of your values and objectives. AfriSIG has come into its own as a unique leadership development opportunity.”

Bob Ochieng, manager of Stakeholder Engagement from Africa at ICANN, agreed that “the school was very successful in general with a very active and enthusiastic class that inspired faculty and resource persons to reason out with them together, meaning the deliberations were really participatory. I liked the diversity of the class not only from a regional perspective (northern, western, central regions of Africa, etc.), but also from a gender and stakeholder background perspective.”

Chenai Chair, from Research ICT Africa, was an AfriSIG participant and graduate last year, but this year she was on the other side: she became a member of the faculty and did a spectacular job as team coach, assisting Avri Doria in the practicum sessions. She agreed with Avri regarding the engagement of the participants. “I found this year’s AfriSIG a class full of people ready to learn about internet governance, to expand and share the knowledge they also have on internet governance. They really engaged with the sessions critically. I think they really worked extremely well on the practicum.” And according to Chenai, some things looked different for her this time: “Being on the other side of the line this year, I saw a mainstreaming of gender issues. I also saw the importance of being able to engage with them once sessions were done. I think this was possible in many sessions. I saw the importance of building a network amongst participants given the way they interacted through the WhatsApp platform which we did not have last year. Having most of them stay in the same place also helped with working on the practicum exercise which hindered, I believe, the 2015 class. The most positive gain was the ability to see the value of the programme from a facilitator and participant perspective. The extent to provide support to the class and engagement was influenced by understanding the needs of participants.”

Dr. Mawaki Chango, founder and managing director of DigiLexis Consulting, commented that “one of the things that went very well this year is the multistakeholder role play component and the negotiation exercise to reach a consensus on a common policy statement as required in the practicum.”

For her part, Pria Chetty, regional director of EndCode, stressed that “it’s the responsibility of everyone who feels passionate about internet governance issues to take those messages, interpret them and take them forward to their respective communities, so that ordinary people get the opportunity to share their views. Whoever is the messenger in those scenarios should be open to influence, and we should be open to hearing different views. Messages from the grassroots levels must be carried forward”.

Gbenga Sesan, executive director of Paradigm Initiative Nigeria, believes networking among the students prior to the beginning of the school initiates familiarity and facilitates interaction throughout the school. “Beyond the practicum and sessions, I observed that networking started very early for the group, and I imagine this has a lot to do with the fact that they had one through an online process that made the physical school look like a continuation of an existing social interaction. This is very useful for learning and for the practicum, and should be continued in future editions”.

The participants recognised AfriSIG 2016 as a valuable learning experience with very concrete applications on the ground. Koliwe Majama, from Media Institute of Southern Africa’s Zimbabwe Chapter, says she finds the school: “a very enriching experience, because I had the opportunity to interact with other African scholars with diverse professional backgrounds. This made the school a very valuable ‘resource pool’ for individuals with an interest in internet and policy. The practicum helped me understand fully the concept of multistakeholderism. I leave the school wiser, more open to negotiation, and have seen that consensus can be arrived at if all stakeholders have an ‘equal footing’. AfriSIG has undoubtedly increased my capacity to articulate issues relating to internet governance from a regional viewpoint. This will be valuable for me as I engage the stakeholders in Zimbabwe, particularly at this point when the country is taking strides to draw up cyber laws and also post enactment. I am also keen to contribute to the monitoring of the implementation of the laws and to contribute to ICT research on the continent.”

According to Mauricia Abdol, secretary-general at Waumbe Youth Development in South Africa, the school had a multidimensional impact: “My experience of the fourth African School on Internet Governance was mind stretching. I will always value it. AfriSIG is an interactive, dynamic programme that allows a space that both novice and expert on internet governance stand to walk away with a lesson learnt. The school was multidimensional in its impact. There was knowledge transfer about internet governance, practical experience in the form of a practicum, cross-border interaction between the various African countries, education centred in an African perspective, and exposure to experts and veterans in the field who advised the students. It was all done in a welcoming and safe space.”

Evelyn Namara, founder and CTO of Innovate Uganda, underlined that the diversity of the attending participants provided a good base for the discussions. “Generally, I liked the fact that class participants were chosen from diverse backgrounds: We had people from government, human rights, technical and civil society sectors, among others. This provided a good base for having multistakeholder discussions. The practicum session was the most valuable take-away for me. It demonstrated how multistakeholderism works in a practical way. The ability to step out of our comfort zones and take on roles other than our main traditional roles made it useful on all levels. I therefore intend to incorporate more of a multistakeholder approach to solving some of the issues we have in my organisation. I also intend to encourage more women to join the internet governance space so that we have more voices in this space.”