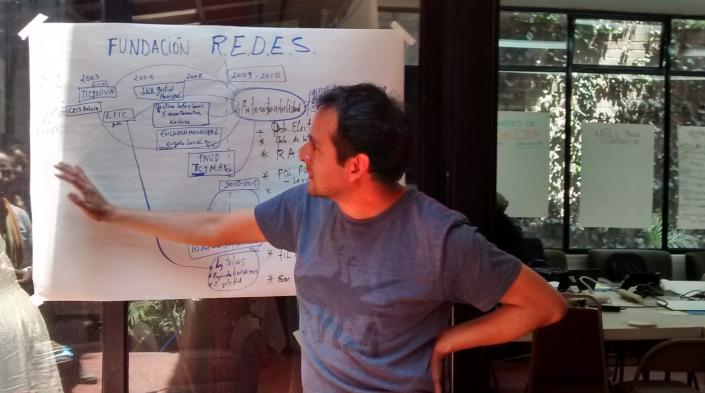 Eduardo Rojas explaining the different areas of Fundación REDES’ work.Fundación REDES, an organisation based in La Paz, Bolivia that works both nationally and regionally, recently joined the APC network as a new member. APCNews talked to Eduardo Rojas, the executive director of REDES, at the APC Latin America and the Caribbean regional members meeting held in Mexico City.

REDES is involved in various programmes and projects in areas such as local development, integrated knowledge building at the national level, integrated environmental management, and sustainable development in relation to technology, among others, as well as special projects that range from support for migrant communities to training for young university researchers in Bolivia.

APCNews: What do you think APC’s main achievements have been over the last 25 years?

Eduardo Rojas: I first learned about APC’s work in 2010 and I have kept up to date with its activities since then, because we have crossed paths in various different spaces. I think that the main contribution made by APC has been to increase the visibility of the role of civil society organisations in setting the agenda for building the information society from a human rights-based perspective. And under this wide-ranging umbrella, it has had particularly active participation around gender, human rights and ICTs. I think that APC’s work has also generated an organised, institutional approach to promoting greater civil society visibility in international spaces like the Internet Governance Forum, regional ministerial forums like those related to the eLAC action plan, and technical meetings like those of ICANN and ISOC, where I have also seen APC actively engaged.

APCNews: You mentioned that your paths have crossed in the past in different spaces, but what was it that led Fundación REDES to join the APC member network?

ER: Since its founding in 2002 and official incorporation in 2003, Fundación REDES has worked on an agenda aimed at development, and its main focus has been on human rights and the central importance of human beings, more than technology. Since 2010 we have been working on the promotion of human rights on the internet in Bolivia, and we have carried out a series of research studies, with a particular emphasis on digital violence. Our work around digital violence is essentially about the defence of rights, based on evidence. And the evidence demonstrates that rights are being violated in online spaces, and not only the rights of women and children, but also the rights of the general public and particular groups. Today REDES is contributing to the regional discussion around this subject based on its own local and national experience.