“We need to avoid a situation where the DNS is used to police content”: A conversation with ICANN's Rafik Dammak

Home / News / “We need to avoid a situation where the DNS is used to police content”: A conversation with ICANN's Rafik Dammak 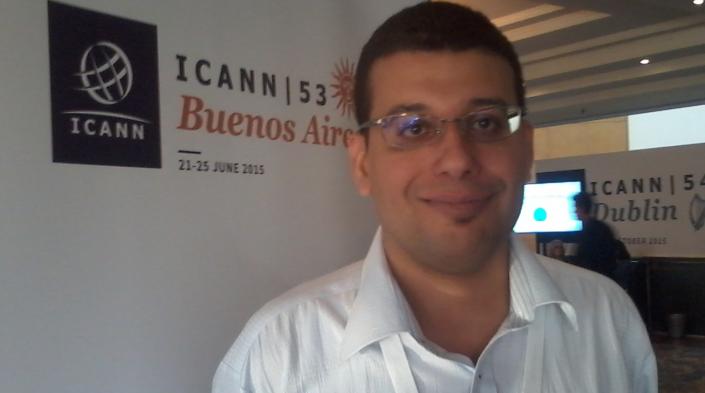 APC attended the 53rd meeting of the Internet Corporation for Assigned Names and Numbers (ICANN) that took place in Buenos Aires on 21-25 June 2015. We interviewed Rafik Dammak, a Tunisian engineer living in Tokyo, who is an APC individual member and chair of the Non-Commercial Stakeholder Group (NCSG) at ICANN. He explains why internet rights activists should get involved in ICANN’s areas of work, since any policy around domain names has a dramatic and global effect.

APCNews: One interesting issue that was raised these days and that has a lot to do with freedom of expression activism is the discussion on whether domain names are content or not. What is the debate there, and what is its potential impact?

Rafik Dammak: At the NCSG, as a diverse group, you find different points of view. So if you have a freedom of expression interest, you see the domain name as one of the spaces where you express yourself. For example, if I am an activist I want to use a domain name that already has a meaning to do advocacy. The issue here is that there is a group with a strong intellectual property interest trying to defend their corporate customers, so they want to avoid a situation like having total.sucks or something like that, and to take the domain from the registrant claiming that it is a trademark infringement. It is happening more now, in particular with the new Generic Top Level Domains (gTLDs). It is to try to do more content policy for specific streams.

With .health, they want to regulate through the Domain Name System (DNS). They also want to limit some specific content and to limit what domain is possible to be selected. The whole idea is to use the DNS to do content policy, to use a technical infrastructure for another purpose than it was designed for. A domain is just that, an identifier on the internet that is humanly readable to lead you to access. But you have different groups trying to put more meaning there – either to defend a trademark, claiming they have all the rights because it is branding, and many times trying to extend even beyond what the international law says and to use their national laws in their benefit. ICANN, as an international organisation, should respect international law but should not try to expand to be the norm-setting organisation. This would be an issue.

We need to avoid a situation where the DNS is used to police content, because it is so powerful, it is a really important component in the whole internet infrastructure and the impact can be global. ICANN manages the policy but not the whole infrastructure, so using the policy to push this kind of content policy would have a global effect. That is why many organisations are here to push for that: because ICANN is the regulator and we don’t have any other organisation with a similar global effect. The intellectual property constituency has a lot of interest and they get paid a lot of money by their customers, so they are trying to use everything to gain the process to push for their own views, even expanding what is allowed by the law in defence of their commercial interests. For that reason they always dismiss human rights within ICANN policy.

Also governments, even when they say they represent the public interest of their citizens, at the end they are really advocating for specific own interests and commercial interests. Governments are not consulting all public interests at the national level, they are not even consulting all the agencies, such as the data protection commissioner, which is another kind of law enforcement agency on the laws regarding data protection, to bypass any due process.

APCNews: What can civil society do about this?

RD: For us, as the space for civil society within ICANN, our only protection is to keep the proper processes. The idea is that you have a process and it may be the only existing mechanism that can protect you as civil society to participate and to voice your concerns.

Other parties are more resourced and they have lots of leverages to game the system, to go to the Board or use the Governmental Advisory Committee (GAC) to push for their interests, and the users in general are the ones who are the big losers here. We are trying to fight against this with our limited resources, and one of the ideas is to get more people involved but also to liaise with these organisations outside ICANN, because we understand that we are competing for attention given the scarcity of resources, even from other NGOs and non-profits. We need to fight a lot.

People say “It is just DNS, it is limited and narrow.” However, the policy that’s made about the DNS has a global effect and it is creating precedent. Like in the case of the WHOIS information, there you have a lot of personal information such as your name, your address, your postal code, all of this can be accessible on the internet. If you are an activist you are really at risk. Even if it is so narrow, DNS is an important part of the internet ecosystem and any policy upon it has a dramatic effect.

APCNews: We have been talking about freedom of expression, but what other rights defended by civil society advocates are under the umbrella of ICANN’s work? In relation to this, why would it be important for them to join the NCSG?

RD: When I try to outreach to these groups I understand they have specific interests. If they join us, they can’t cover everything, it is not realistic.

For those who work around privacy and surveillance my message would be to pay attention to this infrastructure of the internet which has information about hundreds of millions of registrants and users, and there is a privacy issue there – it is creating a precedent and it can be used for surveillance, so this is something they should care about. They do not need to get involved in all ICANN issues, but just to focus on that through the several policy processes we have going on; they can participate by making public comments, and in the working groups.

If you are an internet rights activist, freedom of expression is one of those rights at stake. We need to protect user registrants so that they can get a domain without the risk of some policy process taking it away from them, because it is one of the first tools they have to express themselves. ICANN as a regulator is creating policy and it can create precedent which has a global effect.

About access to the internet, which we talk about a lot, we tend to focus on the internet as an ecosystem. It’s good to have broadband, sure, but we also need more local content, and how do you achieve that? When you build your local infrastructure. But in some developing countries they want more easy access to buy domain names from registrars, and they need to go through a big North American or European company, and that is an issue because in developing countries not all people have credit cards. We need to have more registrars and registries serving local users. If we bring in the providers that are offering DNS but also other services such as hosting, we enable the hosting of local content in a cheaper way – we enable the environment for that. There is also the possibility to have a different business model, not for profit, like some groups that want to serve indigenous or minority groups, and they create an identity with the top-level domain. ICANN has an effect on that, in making these processes more affordable and accessible in developing countries.

APCNews: Is the developing countries-based approach you are talking about something that can be considered mainstream across ICANN’s policies and priorities, or is it more a civil society-driven perspective?

RD: In terms of diversity from developing countries, this is one of our values. Even in our charter defining our mission and processes, we have equality and diversity, gender and regional diversity.

But the diversity of membership is not the case in many groups within ICANN. ICANN is getting more interested in this, because of the idea of globalisation or the internationalisation of the organisation. We also think about diversity of backgrounds and opinions, because depending on where people come from they can have different opinions regarding the transition, and this is our value. Many other groups in ICANN are heavily dominated by intellectual property or commercial interests, mainly with United States-based organisations, for historical reasons.

APCNews: What would civil society activists have to do to join ICANN?

RD: Some people think it is just about joining the meetings. Well, it’s good to join the meetings to get snapshots of what is happening. However, ICANN as an organisation does most things intersessionally, in between the meetings. So we initiate the policy process, which means setting up a working group which has an open membership, so participation is always possible.

By joining a working group you will get a sense of the discussion, be able to comment and influence the drafting of the reports. It takes a lot of observing and learning. But you have to be there. Should civil society be involved or outside? I don’t have a final answer, but my observation is that if you are on the inside of the working group you will be able to influence the substance of a report.

I understand when people come and see ICANN as too complex and too narrow, but ICANN as a policy maker on domain names, and a part of the infrastructure of the internet, has an impact. If you are an NGO with limited resources, there is a possibility to liaise with us and join for concerns on specific topics. Do not come expecting to cover all the topics, but to monitor and raise those that you think are important.