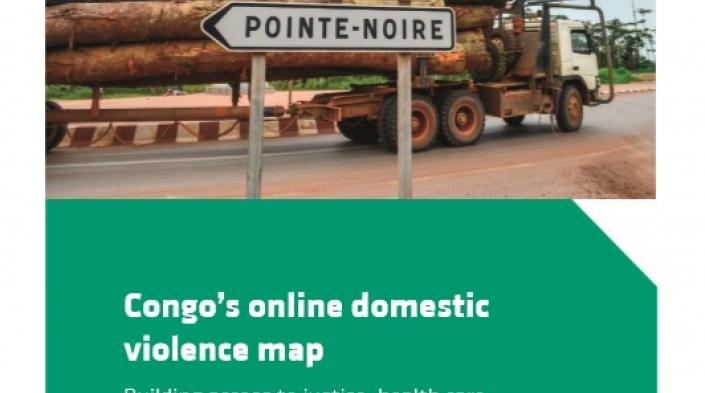 “All victims need to be believed and heard, they need to cry, shout or be silent, get rid of guilt and normalise their reactions. They need their expectations to be confirmed, supported and upheld. They need to be respected at their own pace, to be safe, encircled and to regain power over their lives.” This is the opening quote in APC and AZUR Development’s new publication titled Congo’s online domestic violence map: Building access to justice, health care and social rehabilitation for survivors.

The quote belongs to Sylvie Niombo of AZUR Development, who headed up the implementation of the two-year project Holding government accountable to gender-based violence in the Republic of Congo. That project, which was coordinated by APC and implemented with the support of the Africa Technology and Transparency Initiative (ATTI), served as the basis for this new publication.

For over 20 years, the APC Women’s Rights Programme has been actively working to get and keep women and women’s rights activists online. The world continues to be a place where women are disproportionately the targets of violence, and with the massification of internet access, this is reflected in a growing pattern of harassment, cyber stalking and blackmail of women online. APC embarked on this project with AZUR Development, an active APC member since 2007, to map domestic violence in the Republic of Congo using as a main tool an online mapping platform that tracked cases between December 2011 and March 2014.

The development of this online mapping platform made it easier to keep track of cases and to produce visual information around the commitments and services of the government, police, health facilities and courts of law, in order to hold them accountable for working to prevent violence against women and girls.

During the armed conflict and post-conflict years in Congo, data was routinely collected on sexual violence by national and local governments, CSOs and churches. An analysis of the situation carried out by UNICEF in 2008 concluded that a major weakness was the lack of coordination among the different institutions, including the absence of a common set of tools.

The process of developing an online map led the CSOs to rethink their strategies for combating domestic and sexual violence and importantly to work together. This project enabled the CSOs to define a more effective strategy to combat violence against women and girls by streamlining how APC and AZUR Development worked and using technology to make the problem visible across the country.

Thanks to support from the government and the French Embassy, the project team was able to set up one-stop centres in each of the cities where the project was implemented – Pointe Noire and Nkayi – to provide advice and support to women and girls who face violence and their families. The police, gendarmerie and courts have committed to supplying liaison staff.

This publication, which is especially useful for women’s rights and ICT for development organisations, UN agencies, health providers, legislators, policy makers and justice enforcement bodies, gathers the learnings and challenges identified by all actors involved in the project, and reflects on the next steps to be taken in holding governments, police, health facilities and courts of law accountable in their commitments to eradicate violence against women and offer support to survivors.

Why the Republic of Congo? Some background information

Cultural norms and domestic violence: Congo is a patriarchal society. A “successful” woman is a married woman with children. Domestic violence and incest rates are quite high. Girls and women are taught to keep quiet and accept domestic violence as part of the “good and bad” that comes with marriage. AZUR Development reports that men are conferred with the right to make “mistakes” in their domestic and sexual conduct. The project study showed that many women were unwilling to condemn their husbands publicly. Dishonour was frequently mentioned. Women sometimes withdraw complaints against their husbands because of family pressure or economic necessity.

Keicha, 14, was living with her sister after their parents died. Then her sister got married and her new husband would tease Keicha and touch her inappropriately. In 2010, Keicha was raped by her brother-in-law. She went to talk to her sister but instead of receiving support, she was beaten and kicked out of the house. She had only one desire: to tell her story and have it taken seriously. Keicha had the chance to make her story visible and to join forces with other people working to hold the Congolese authorities accountable for their work to prevent violence against women.

Lack of information: Some women believed that violence is normal. They were unaware that it is a criminal offence and that not only do they not have to put up with it, but they are entitled to go to court to seek redress and change. Tolerance of domestic violence may be reinforced in families and communities which hold conservative religious beliefs where women are expected to be submissive.

Sexual violence: Congo is emerging from a decade of armed conflict where rape and sexual violence were used as weapons of war. Domestic violence, sexual harassment and incest are commonplace. Over 15,000 cases of sexual violence were reported in 2009, and more than half of the victims were under 18 years of age. A survey conducted by AZUR Development estimates that only 10% of incidents are reported.

Legislation and justice system: The government of Congo committed to eradicating gender-based violence when it signed the United Nations Convention on the Elimination of All Forms of Discrimination against Women (CEDAW) in 1982 and more recently the Maputo Protocol, an Africa-wide protection of human and women’s rights, in 2007.

However, the Penal Code and the Family Code were written in 1810 and 1984 respectively. Girls have improved rights thanks to a 2010 law which protects children from violence. Given the numbers and seriousness of cases of sexual and domestic violence, the monitoring of violations and the response from the legal and health sectors is woefully inadequate.

The justice system is stacked against a survivor reporting a crime or seeking justice from the courts. Congo’s patriarchal culture increases society’s tolerance of domestic violence by everyone involved. Male abusers tend to go unpunished. This ingrained inequality is formalised in the existing legal framework to the extent that marital rape is not criminalised in Congolese law.

Estelle was abandoned by her biological mother when she was one year old because of her intellectual disability. She was taken in by her loving aunt. When she was eight, Estelle was almost raped by neighbours. Her aunt and the neighbours resolved the issue “amicably”, but four years later, she was assaulted once again. Since her aunt was out of town, no one took care of Estelle, even though she was in shock and bleeding. It was not until a week later, when her aunt returned, that Estelle got access to medical treatment. Estelle’s aunt was furious and filed a complaint. However, she came up against her own family. They said that god would ultimately punish the abuser.

Access to technology: In Congo just one in 100 people has a fixed telephone line. In contrast, nine out of ten people have a mobile phone. Internet access is expensive, in part due to the erratic electricity supply, creating the reality that just seven in 100 Congolese are online.

Public health service: Most of the population has no access to health insurance. The few doctors attending do the best they can, but they are often poorly paid, under-equipped and frequently come under pressure from concerned family members. In almost all centres including the hospitals, medical equipment is basic or lacking. Rape kits are virtually non-existent outside of the capital.

Psychological trauma and assistance: People who experience violence often suffer a number of serious psychological consequences. However, in the Congolese population there is very little awareness among victims and their families about the consequences and the availability of treatment, and consequently, the project study found that at least 90% of victims did not seek access to psychological support, and that there were no staff specifically trained in the medical and psychological treatment of survivors of sexual and physical violence in Nkayi and Pointe-Noire.