A national cyber-strategy for Congo, which integrates women

Home / News / A national cyber-strategy for Congo, which integrates women 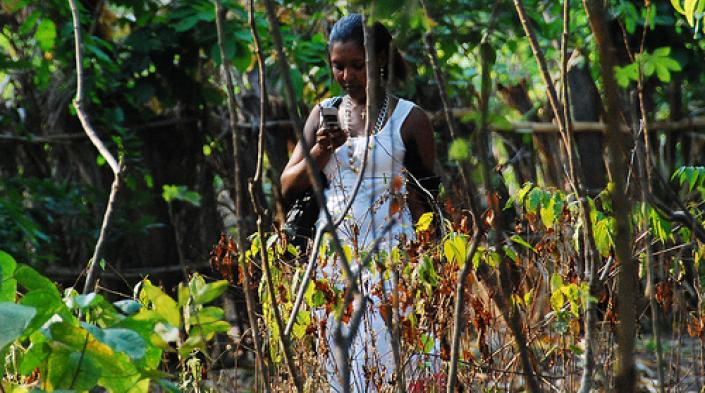 Sylvie Niombo is the Executive Director of Azur Développement, a small NGO that works in the area of gender and ICTs in the Congo and member of the APC. Azur participated in the Communicating for Influence in Central East and West Africa project, which involved research and advocacy on national ICT policies and the telecommunications reform in various African countries. Soon after the project began, including women into the national ICT strategy became a priority for them. Niombo talks about the various challenges and opportunities the CICEWA project brought, and how they were able to put gender on Congo’s ICT map.

APCNews: How has participating in the CICEWA project helped your organisation?

Sylvie Niombo: By being involved in this CICEWA project, we are much better recognised as an organisation, and have much more credibility now. Many more people know about who we are as a women’s organisation that works with ICTs, and we’re being invited to meetings and so on – much more than ever before. I think this is one of the greatest benefits to participating in this project. In terms of networking, it has also reinforced our work with local organisations who work in ICTs, many of which we were already working with; but the difference is that it has expanded to human rights organisations who are now interested in ICTS and who are assisting meetings and activities. We see that they are shifting their focus to including women and ICTs – not just ICTs.

We’ve also gained new skills. We have to be realistic since the project was not very long – especially where advocacy is concerned, but we did gain new research skills because we had to learn about how the telecommunications sector is evolving, as well as meet to discuss with key resource people, find and analyse documents, etc Along with these new skills came a better understanding of telecommunications-related issues in the Congo.

It also gave us a boost in our other work, such as the work we are carrying out for the Millennium Development Goals (MDG3). We’ve been focussing our advocacy on increasing public access points for women and girls as well as vulnerable people (such as rural populations, handicapped, and indigenous people). We’ve also been working on increasing funding for ICT training and capacity-building programmes catering to these groups; the creation of spaces that are adapted to women’s needs; and the integration of gender in the political, judicial and institutional ICT sphere, which is where the cross-over with our work on the third Millennium Development Goal occurs.

The networking we did for CICEWA and our increased credibility complimented the awareness building work we were doing for MDG3. Little things, like we were able to obtain rooms to hold our meetings for the MDG3 small grant winners and got more advance confirmation from people. This never would have happened before, so I think CICIEWA helped increase our credibility all around.

APCNews: What sort of challenges did you come across during your work on CICEWA?

SN: We experienced some challenges in obtaining information, because it is not all collected in one specific place. Information is disparate, and spread throughout the various administrations and ministries, so it takes time to chase it down and go through the different bureaucratic steps.

We also faced some challenges related to media and getting the issues out to the public. In the Congo, journalists tend to stick to simply recounting and reporting on an event, rather than present analytical pieces that break down the issues to the reader. Also, there is very little funding for ICTs because it is assumed that large IT companies will provide funding, but this is not the case for the smaller events, and so it becomes quite difficult to get journalists out, unless we are able to pay for their expenses.

Also, limited funding stunts the moment and growth of our work. When we train organisations, if they don’t have the money to carry out actions on the ground, then the impact remains quite weak. The training can only go so far, if there is no money to carry out the work on the ground once the training is over. This is why our work with the MDG3s has actually worked out well – because the organisations we trained received small grants and were able to use them towards the work they are doing on the ground. In the same sense, more funds would give the advocacy training we did for CICEWA a push. The CICEWA research helped us learn about questions of infrastructure, laws and regulations regarding ICTs. Having a better understanding of these allowed us to better understand the context in which we were carrying out our MDG3 work, to achieve equality for women.

APCNews: How did you manage to integrate gender into the CICEWA project?

SN: We used the APC’s Gender Evaluation Methodology from the very beginning. The methodology allowed us to present stats and information that decision-makers can understand – concrete numbers that illustrate Congo’s digital divide. One of the first things that struck us was how little knowledge there is out there regarding women and the ICT sector. In the Congo, there are very few women in this domain, and even if there are, women are rarely engaged in civil society, and this is a problem related to awareness. The other thing, is that the ICT sector has always been considered a masculine domain, so it is difficult for women to become active in it, because they generally do not have access to the basic competencies, so with our CICEWA work, we adapted our action plan to something that was appropriate for our country. For example, in GOReTIC, the francophone CICEWA network, we all drafted the same action plan together – same actions, and strategic axes, etc., so we had to adapt ours. If you had seen our initial plan and what we actually did on the ground, you would see that it was not long before our work on the ground quickly changed.

Incorporating gender into the political system is a process, which is still being undertaken and has not yet been finalised. We’ve started the work but there is still a lot left to do. We did an analysis of the current policy, and saw that there are many problems with the current policy. GEM helped us set indicators, and also allowed us to measure the progress being made. We recommended certain changes to the policy on account of the findings GEM gave us. So we’ve proposed an action plan draft that integrates gender and ICT that could be applied to the national ICT strategy. At the moment, there are many proposed actions plans – none of which incorporate a gender perspective, and the creation of an ICT Fund with the Minister of Post and Telecommunications; and scholarships and training programmes for women and female students.
The changes we propose include (i) the creation of access points and community radio stations in key establishments (such as hospitals, libraries and churches), (ii) ICT incentive programmes to promote women’s rights. We have also recommended that those who work in the ICT field in the country undergo gender awareness training and are also thinking about suggesting the integration of training modules for women in politics, put on by the Ministry of women.

In response, the “Direction des nouvelles technologies” (the government body that is in charge of new technologies) has created a small team to look at the action plan we’ve proposed, so we’re pleased as we feel these are great steps forward and a willingness to work towards this. While the decision-makers have made no official comments on the draft action plan, they did help us with a “feuille-de-route” to help guide us in the process. GEM, combined with the CICEWA process helped us move forward as an important actor in Congo’s ICT sector.