At the interstice of digital rights and environmental justice: Four issue briefs to inform funding 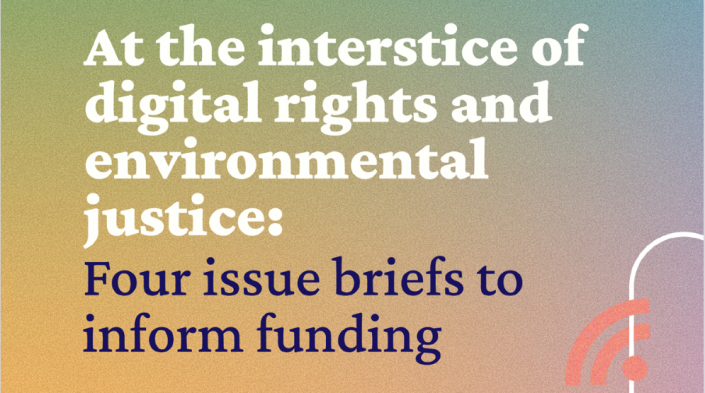 In mid-2021, the Association for Progressive Communications (APC) was asked by Ariadne Network, the Technology and Society Program at the Ford Foundation and the Mozilla Foundation to prepare a series of short issue briefs for funders on potential priority areas for funding activities or initiatives that would bring the work of digital rights organisations and environmental justice actors closer together. The context was the recognition that there was a need for the two groups to work more collaboratively given the global environmental and climate emergency.

Each brief states the key problem from the perspective of the APC network, suggests mechanisms or processes for engagement and actors we feel are worth engaging, and includes specific recommendations for donors. Also included is a summary of top-level recommendations common to all of the briefs, which highlight the need for building trust between digital rights organisations and environmental justice actors, an awareness of each other’s priorities and ways of engagement, collaborative frameworks for action, including through research and capacity building, as well as identifying new ways of outreach and engagement.

The briefs were developed through a collaborative process that involved input and feedback from a small group of interested APC network members, partners and allies in APC’s Technology, Environmental Justice and Sustainability Initiative. APC circulated drafts of the briefs for input and convened two online meetings to discuss them, with an aim to ensure that they represented the perspectives and concerns of the APC network working in the global South.

While there are many other important fields of activity that need funding and further exploration, and no doubt other actors and networks worth engaging not identified in the briefs, it was hoped that the briefs would at least be able to provide reference points for collaboration between digital rights organisations and environmental justice actors, and areas of immediate impact and intervention for donors. They should therefore be read as the beginning of a broader conversation, rather than ends in themselves.

These issue briefs by APC are part of a larger body of work around the intersection of digital rights with environmental and climate justice, supported by the Ford Foundation, Ariadne and the Mozilla Foundation. This research project aims at better equipping digital rights funders to craft grantmaking strategies that maximise impact on these issues. The APC briefs were published as part of a bundle of research pieces that includes publications by three other organisations:

– Environmental Justice, Climate Justice, and the Space of Digital Rights