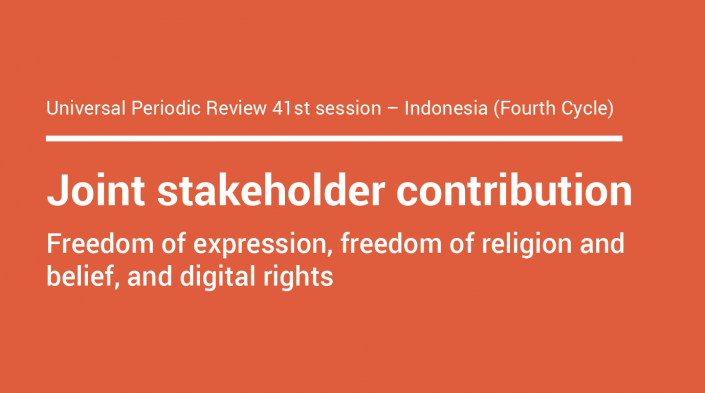 In this submission, the Association of Progressive Communications (APC), EngageMedia and Southeast Asia Freedom of Expression Network (SAFEnet) examine Indonesia’s compliance with the recommendations received during the third Universal Periodic Review (UPR) cycle in 2017. This submission focuses particularly on digital rights including freedom of expression, the protection of human rights defenders (HRDs), including women human rights defenders, violence against women and misinformation.

Tracing back to the previous UPR cycle up until this date, the Indonesian government is partially implementing the recommendation to combat discrimination and violence against women based on numbers 139.27, 139.28 and 139.119. The legal framework for combating violence against women and children is still in the drafting process (RUU TPKS) and has not been passed yet.

The government is partially implementing recommendation numbers 139.73, 141.42, 141.26, 141.28 and 141.57 to ensure and revise national and regional laws that do not
discriminate or limit certain group’s rights based on their religion and belief.

The government does not comply with the recommendations number 141.27 and 141.34 on repealing or eliminating the blasphemy law. Even more, the new Criminal Code Draft contained several articles relating to blasphemy.

The government can be considered unwilling to comply with 139.64 and 139.66 on protecting HRDs. Other than The National Commission on Human Rights (Komnas HAM), regulation on human rights protection procedures that have been violated often and still criminalise HRDs. Indonesia has not shown its commitment to protecting HRDs, especially those who express their voices in digital spaces.