EROTICS regional survey 2020: A different contextual exploration on sexuality, rights and the internet 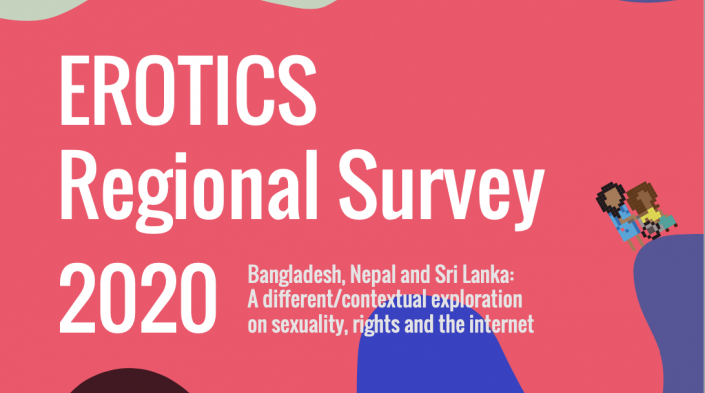 At different times over the past seven years, the Association of Progressive Communications Women’s Rights Programme (APC WRP) project EROTICS: Exploratory Research on Sexuality and the Internet has conducted surveys among its worldwide network of gender and sexuality activists, advocates, professionals and academics. APC launched the EROTICS network in 2009 to begin research in Brazil, India, Indonesia, Lebanon, South Africa and the United States. The research focused on the challenges facing LGBTIQ+ (lesbian, gay, bisexual, trans, intersex, queer) and other sexual rights communities. It was done to understand the role of the internet and information and communications technologies (ICTs) in the world of sexual rights activists globally. This project sought to answer the question: “How may emerging debates and the growing practice of regulation of online content either impede or facilitate different ways women, queer and trans people use the internet and the impact on their sexual expression, sexualities and sexual health practices, and assertion of their sexual rights?”

Following this, global monitoring surveys were conducted to learn about the experiences of online usage and explore the potential as well as challenges of the internet in exercising gender and sexuality rights. The first global survey was sent out in 2013, and a revised version of the same questionnaire was again sent out in 2014. In 2017, the questionnaire was released again with the addition of in-depth interviews with individuals who volunteered to expand on their responses. The surveys attempted to answer the questions: “How savvy are sexual rights activists in handling the legal and technical issues that come along when they use the internet? How do they negotiate online threats and restrictions?” These surveys provided a perspective of how activists used the internet, but it was difficult to glean deeper insight into local understandings of the internet and gender and sexuality – because the surveys were in English, and often responses were predominantly from a few countries.

Thus, in 2019, as a continuation the previous work and to deepen the network regionally, APC WRP began the “Expanding the EROTICS network in South Asia” project, which aimed to expand the network of sexual rights and digital rights activists from India, Sri Lanka, Nepal and Bangladesh. In this new iteration, more countries in South Asia were added to explore internet-related challenges and the experiences of women, LGBTIQ and sexual rights advocates. As a learning from the previous research cycles, APC and its partners wished to deepen the scope of the research undertaken, especially in South Asia where people are more familiar with local languages.

In 2019, a regional monitoring survey that focused on experiences in Bangladesh, Nepal and Sri Lanka was launched. Through a mixed-method research approach, the survey was hashed out in a collaborative process among the three countries. This regional monitoring survey was the first time the partners chose to open the survey up to users who didn’t necessarily identify as sexual rights activists. Thus, the findings illuminate several important connections between identity and usage, online expression, and how the internet is used as a tool to expand the understanding of gender and sexuality. It also provides us an insight on how users see the overlap or binary of online and offline in their lives.

One of the key findings from this survey has come through the process of building, disseminating and analysing the findings itself. We embarked on the journey of conducting a survey that was for the first time translated into local languages and used to explore the regional undertones of the internet and the experience of it in our respective countries. In an attempt to localise the process of research fieldwork, the survey was first written in English and all the regional partners were involved in providing feedback. This process continued until the partners felt ready to translate it into the local languages. During this process of translation and uploading of the regional surveys, all attempts were made to infuse the survey with local language and local culture idiom. This was done in collaboration with the APC technology team and the regional coordinator. It must be noted that since both these persons were not familiar with the local languages, several iterations took place to ensure the regional language surveys had no errors. However, some errors did occur in this uploading and translation process. Our learnings from the survey are explored through the chapters with some inter-country comparison and some localised information.

This research is part of the Association for Progressive Communications (APC) project “Expanding EROTICS Networks in South Asia”, funded by AmplifyChange, and is based on a strong alliance with the partners and focal points in four countries: Sachini Perera and Zainab Ibrahim (focal points for Sri Lanka), Parsa Sanjana Sajid (focal point for Bangladesh), Point of View (partner organisation in India), and Body and Data (partner organisation in Nepal).