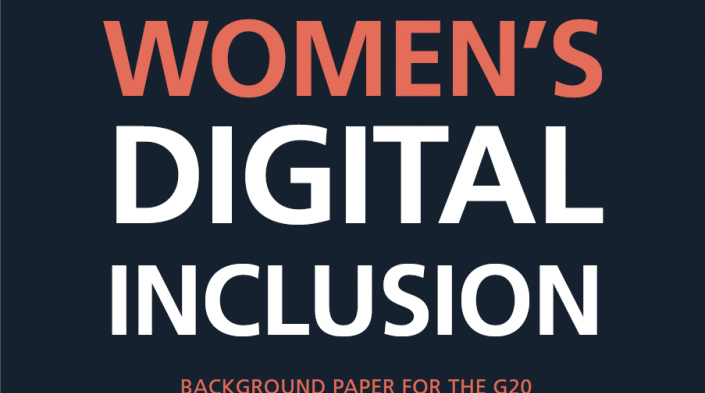 Women20 (W20) emerged after the G20 summit that took place in Australia in 2014. It is one of the key G20 engagement groups and it supports the promotion of gender-inclusive economic growth, with the aim of promoting efforts advanced by the international community in the areas of women's economic and social participation and their financial inclusion and education. W20 works each year producing recommendations and establishing measurable and actionable goals to influence G20 governments so as to implement these objectives.

Argentina is presiding the G20 in 2018, and W20 Argentina has been organising national and international dialogues around four focus topics: labour inclusion, financial inclusion, digital inclusion and rural development. A multistakeholder group came together to work on digital inclusion policies and recommendations to achieve actions with real impact. A wide and varied inclusion of voices has reflected a diversity of realities and framed a process of dialogue and consultation whose results will be reflected in the communiqué to G20 leaders.

The W20 Summit is taking place in Buenos Aires on 1-3 October. At the same time, a Feminist Forum against the G20 will take place nearby, in front of the National Congress. Considering these debates, APC and the Internet Society decided to produce this briefing paper, authored by Anri van der Spuy and David Souter, to analyse discussions and recommendations in the area of digital inclusion.

The paper outlines ways in which policy makers can facilitate the internet’s positive potential through an enabling framework for women’s digital inclusion:

In its conclusions, the paper reaffirms that “the internet has great potential to advance women’s equality and empowerment, but that will not be achieved without greater understanding, analysis and policy development which seeks to align digital development with gender equality.”