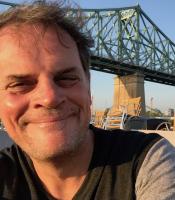 Co-founder of Alternatives and current co-chairperson of the Quebec Association of International Cooperation Organizations (AQOCI), Michel Lambert believes in the importance of uniting civil society groups and organisations, at home and in the rest of the world, to promote democratic principles, equality and fairness for all. Prior to being nominated executive director of Alternatives in 2007, he established and developed various international solidarity programmes, initiated innovative global justice campaigns with civil society groups and trade unions in Quebec and Canada, and directed Alternatives’ Democratic Republic of Congo branch from 2002 to 2005. Michel Lambert is a member of the boards of directors of the Alternatives International Federation, Alliance syndicats et tiers-monde and the AQOCI as well as APC. He also sat on the boards of the AQOCI between 2009 and 2013, of APC between 2007 and 2011, and of Food Secure Canada between 2009 and 2012.

Michel Lambert also represents Alternatives at the International Council of the World Social Forum and within various coalitions in Quebec and Canada like Voices/voix and the Réseau québécois de l'intégration continentale (RQIC). He was co-founder of the Digital Security School in Montreal and played a major role in building and mobilising and for the People's Social Forum held in Ottawa in August 2014. Read Michel Lambert (in French) in the Journal des alternatives, The Huffington Post Quebec, or on Rabble.ca and Twitter.