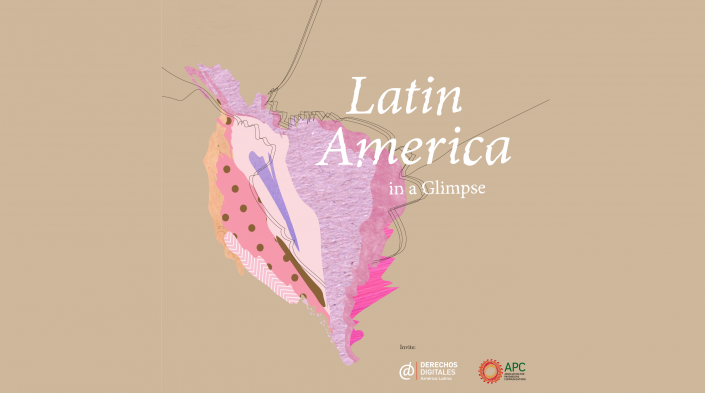 During the last three years, Latin America in a Glimpse has been an annual recount of the most relevant events in Latin America in terms of technology and human rights. This summary allows readers to get an idea of the scene in the region regarding: relevant issues discussed, emerging threats, the response of public policies to the challenges projected by technology and the role that civil society organizations are playing in those scenarios.

We also wanted to highlight the work that each of the civil society organizations are doing in their respective countries and areas of interest, both through the report and the annual event held the day before the internet Governance Forum, with the intention to establish a bridge between Latin America and other regions of the globe, to facilitate interaction with financiers, allies and colleagues.

In this fourth edition of Latin America in a Glimpse we wanted to continue this work, but with a twist. Following a global trend, we want to understand the intricate link between gender and technology, and the responses that, from this part of the world, different groups of women have given to this complex, problematic and difficult relationship. We set our objective on researching the projects that have been developed during 2017 in Latin America that work the intersection of gender and technology. We want to answer questions such as: Which are the critical areas being explored? What are the main problems? And, above all, who are the people behind each of these projects, which are their motivations and how is their work framed in a larger panorama of the struggles for gender equity?

An increasingly violent and hostile digital environment towards women, the lack of participation in the different layers of the internet ecosystem, and a generalized scenario of scarce opportunities, multidimensional injustices and invisibility, has generated a series of different answers, but with a common goal: a dignified internet for women, where they can exercise their rights freely and develop in an integral and autonomous way; where digital technologies are a tool for personal and collective fulfillment, and not a weapon of the male dominated status quo.

What we found was a highly active community of organizations and collectives that practically covers the entire spectrum of nodes in digital environments, from the creation of feminist servers to the discursive occupation of the internet through self-managed media. Women who have decided to lose their fear of error and have discovered the joy of learning, experimentation and sorority. Faced with devastating statistics, the initiatives listed here are powerfully inspiring. That is precisely the idea: to build bridges between the women mentioned here and those who - due to our lack of time, knowledge or even clumsiness - are not; women doing similar jobs in other regions of the planet and, above all, those who after reading the following pages are encouraged to join the fight. The latter will surely appear in the next editions of this report.

The publication "Latin America in a Glimpse: Gender, feminism and the internet in Latin America" was funded through the APC member subgranting programme made possible by the Swedish International Development Cooperation Agency (Sida).