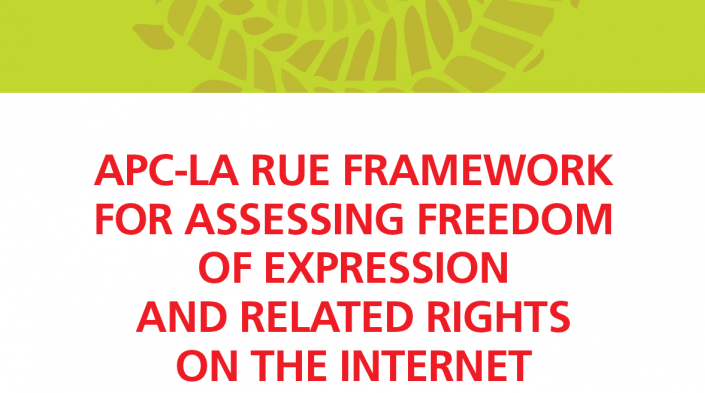 In his 2011 annual report, the United Nations Special Rapporteur on the promotion and protection of the right to freedom of opinion and expression, Frank La Rue, focused on the internet. The report considered general human rights principles on freedom of opinion and expression, whether these apply to the internet, and a number of issues including:

In doing so, the Special Rapporteur developed a broad framework for assessing freedom of expression on the internet. In 2012, APC used this framework and, drawing also from General Comment 34 on Article 19 of the International Covenant on Civil and Political Rights (ICCPR), as well as recommendations made by UN special mandate holders, developed a draft framework (in the form of a checklist) for civil society groups to monitor legislation, raise awareness, defend internet rights, and influence policy. That year we used the framework to support research on freedom of expression online in Pakistan, Saudi Arabia, Indonesia, Azerbaijan and Argentina and, at a meeting with Frank La Rue and internet freedom advocates in Washington in December 2012, received support for beginning to use it as a tool to support internet rights monitoring and human rights reporting.

In early 2013, APC released the draft framework and developed our first full country report, focused on New Zealand. We also began testing the access-related aspects of the framework in Brazil and Kenya. Our network members and partners also tested the framework in Bangladesh and began work in India.

In 2014 and beyond, we plan to extend our research to more countries including in Asia (India, Malaysia, Pakistan and Turkey), the Middle East and North Africa, and to update the New Zealand study on an annual basis. We will strive to make the framework available to other researchers and research projects, where appropriate, in order to support and strengthen the development of strong internet-related human rights monitoring and reporting at national, regional and global levels. We also plan to critique the framework and see if it is possible to develop one which integrates more human rights, including women’s rights, sexual rights and economic, social and cultural rights.

We will take the results into our research, capacity building, networking and advocacy strategies and activities, such as our advocacy at the United Nations human rights mechanisms, and to support our members and partners to advocate for deeper understanding that internet rights are human rights.

APC has developed the framework based on the work of Frank La Rue and on General Comment 34 on Article 19 of the ICCPR. The questions in the framework are intended to provide guidance in monitoring and reporting on internet-related human rights violations, specifically those related to freedom of expression. Further work is needed, and is underway, to develop more comprehensive guidance. In the meantime, we welcome comments, criticism and review on its use.