Feminist by Design: Ways of knowing and epistemic approaches about feminist internet research 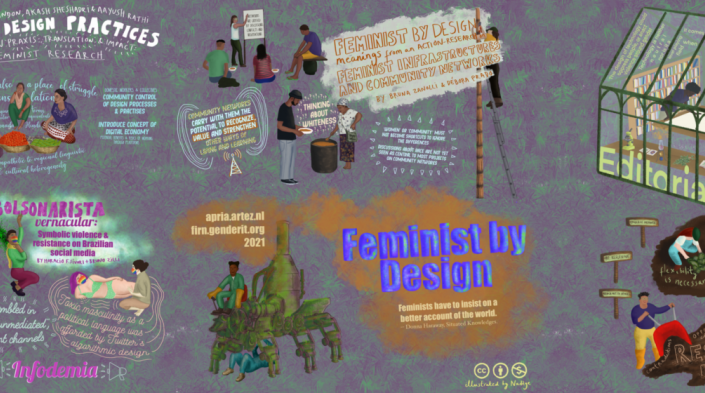 Feminist By Design is ambitious in its title and aims. The journal showcases research journeys, findings and feminist intentions, bringing together a diverse group of researchers from around the world who were part of the Feminist Internet Research Network (FIRN).

FIRN focuses "on the making of a feminist internet as critical to bring[ing] about transformation in gendered structures of power that exist online and onground." As part of that work, its members "undertake data-driven research […] to drive change in policy and law and in discourse around internet rights," with the broader objective that women and gender-diverse and queer people are considered in discussions around internet policy.

Some of the research questions that the project has been grappling with are:

The field of internet research draws on various research methods, analytical and digital tools, interdisciplinary perspectives, as well as experimental and artistic enquiries. However, there remains a gap in the knowledge production and imagination of how complex the internet is. It is still unclear how it intersects social fabrics or affects social and economic inequalities, androcentric technological innovations, the functioning of democracy, and heteronormativity.

The field of internet rights activism has always taken software and coding as central to their concerns – and from the beginning has centred questions on open-source software. This ability for people to determine and see (quite literally into the hardware of) our own machines was very central to realising our rights. The machines, the internet, and, in particular, the relationship between data, design and algorithms have become increasingly complex since the early 2000s. These are political and social issues, as evidenced by research in relation to data, algorithms and societal impact.

The civil society sector, which has relied on a discourse of ICTs for development, and then later for digital and internet rights, now understands that power in the digital domain has concrete and real impacts on people’s lives from across society. As such, as an extension of FIRN’s work, the core intention of Feminist By Design is to infiltrate methodological frameworks – which are often considered scientific – by creating a platform for diverse learnings and reflections about feminist internet research, mainly from the global South.

Articles in this journal

The articles in this journal explore several strands in relation to feminist ways of knowing and epistemic approaches. They explore feminist research practices and processes, what happens when our designs on the world – or rather feminist intentions – are the springboard for building infrastructure. What are the possibilities of more accessible research outputs and what could be the trajectories of feminist intersectional investments in digital media in the times of anti-gender and anti-rights discourse?

Horacio F. Sívori and Bruno Zilli engage with how complexly intertwined the relationship between digital technology is with social media and various kinds of mobilisations via the internet. The authors look closely at how the amplification of homophobic speech as a political code was afforded by Twitter’s design and algorithmic architecture. Yet, they also reveal how resistance also took place on these platforms through the mobilisation of varied publics by means of memetic images in defence of public health and of sexual diversity.

Through their project of interrogating of digital labour and platformisation, Aayush Rathi, Akash Sheshadri and Ambika Tandon focus on research processes and practices by looking at how dissemination practices around research have often privileged communications to external audiences, particularly for the purpose of policy reform. They explore what it means to make research and outreach more participatory, translating academic knowledge into more accessible forms, and how this could outline the potential for research to produce radical change and translate knowledge across communities.

And finally, Nadège’s visual piece departs from a close examination of the contributors’ texts. It is marked by a close relationship with APC’s Women’s Rights Programme (WRP) in various other spaces and forms of activism that we engage in. It envisions WRP as located within a glass library and touches on concerns related to data and artificial intelligence not directly dealt with in this journal. The visual also creates a space of knowledge creation, production and thought that is marked not only by the franticness of the pandemic years, the necessities of raising resources for this work, and the instabilities of the personal, professional and other myriad realities of the people, but also raises the possibility that what we do could be a space of rest and work if informed by politics, care and a particular vision.

The articles that are included here sketch out different stages and moments of knowledge production from a feminist perspective. In Savori and Zilli’s article about online homophobia, there is a nuanced understanding of the communities that are vulnerable to hate online. From that starting point, the authors see how the architecture of the internet accentuates their vulnerability, even though it also gives space for them to network and build connections with each other. The other articles are more focused on the process of research itself as a space within which knowledge can be gleaned. Rathi, Tandon and Seshadari explore specifically the relationships with the people and communities who can be seen as "subjects" of the research. However, in Rathi, Tandon and Seshadari’s design, they were equal collaborators and the research process is one by which there is growing awareness of their own rights for the communities involved, especially when a complex digital landscape of platforms is becoming part of the everyday life of workers.

In Prado and Zilli’s article on community networks, they shift their focus from the pragmatic concerns and considerable travails of bringing technology to a remote region (especially during the COVID-19 global pandemic) towards the conversations around race and exclusion that must happen among researchers and communities. All the articles connect to Nyx McLean’s findings based on interviews with the FIRN researchers about the messiness of the research process. The final packaged form of research as an article or a book conceals inevitably the myriad and complicated negotiations, compromises and even perhaps undoings of the project of research or knowledge production itself.

Edited by Namita Aavriti Malhotra, Tigist Shewarega Hussen and Mariana Fossatti, and conceptualised with Nishant Shah, professor of Aesthetics and Cultures of Technologies at ArtEZ University of the Arts.

The editorial team would like to thank all the authors and peer reviewers for their time and efforts on behalf of this special issue on Feminist by Design.