Seeding change: BAIF partners with community members to create a digital ecosystem in the tribal village of Pathardi, India

How are APC partners improving their communities' lives? In this column we’re highlighting stories of impact and change by our partners, supported by APC subgranting. BAIF is partnering with community members to enable a digital ecosystem in Pathardi, a tribal village in India, as a way to archive local knowledge and culture, protect biodiversity, and provide new income alternatives.

How can we build digital services and networks that are meaningful for people’s lives in the diverse realities lived? With a community-based approach, the BAIF Development Research Foundation fostered technological appropriation and enabled the creation of a digital ecosystem linked to the local knowledge and culture, as well as provisioning basic day-to-day services, such as financial, governance and utility services.

BAIF (which stands for Bharatiya Agro Industries Foundation) is a non-profit organisation established in 1967, operating in 318 districts across 13 states in India. Among its initiatives is work with emerging technology-based projects including information and communications technology (ICT)-related interventions.

By implementing the Gram Marg Rural Broadband project in conjunction with the Indian Institute of Technology (IIT) Bombay, with the support of the “Connecting the Unconnected: Supporting community networks and other community-based connectivity initiatives” project led by APC and Rhizomatica, BAIF helped to deploy an online and offline network in Pathardi, a tribal village in the Palghar district of India. They trained the community to create a digital ecosystem grounded in the local context, needs and desires.

In this week’s Seeding Change post, we share the story of the people and the initiatives carried in different hamlets of Pathardi, leading to two important achievements: the provisioning of digital services to generate income and livelihood alternatives, and the preservation of the local biodiversity, art and culture.

Ramkhind is a hamlet of Pathardi located more than 10 kilometres away from the nearest town, Jawhar. Mobile-based connectivity is still limited in the area and the population lack quality network connectivity to exchange information.

To compensate for the absence of mobile connectivity in Ramkhind, BAIF partnered with community members to install an intranet, planned to be used to share relevant videos and news on relevant topics for the local people, such as agricultural innovations and government schemes.

BAIF explains that partnering with the people living in the territory in the set-up of networks like these is crucial, “so that the ownership of the network stays with the community and they are not dependent on a third party for maintenance or repair of the network.” The knowledge shared can also open a secondary livelihood option for community members, which happened with Akash Kirkira, a young resident who was involved in the deployment of the network in Ramkhind. This allowed Akash to gain experience and knowledge around the installation of connectivity and electrical devices, hardware connections for connectivity-based devices, and how to make use of them.

Building a digital ecosystem in Pathardi is helping with the archiving of local knowledge and culture, both to preserve them and to mobilise digital tools to share them with more people. In the hamlet of Ramkhind, Ujjwala Bhoye, the daughter of paper mache artist Sudam Bhoye Kaka, worked on digitising her family’s cultural tradition. She took photos of the various traditional paper mache masks which are worn in the tribal festival of Bohada, which means procession. Bohada features masked characters who depict the tribal concept of creation and their role in sustaining life. Ujjwala has also made a list of the various names of characters which take part in the festival, noted down some details of a number of the masks, and worked on documenting some of the musical forms in the village.

On the top of a hill in Pathardi, another example came from the hamlet of Dongarpada, where Sangita Bhoye collaborated with Ujjwala to document Pathardi’s rich traditional cultural heritage in the form of different musical instruments, paintings and masks, among others. They also have plans around creating an e-commerce platform to eliminate the role of intermediaries and offer the guarantee of original products to a global clientele, hoping that the local artisan community can earn a higher income.

In addition to artistic and cultural knowledge, biodiversity is another important element to be preserved. In this regard, Sangita Bhoye also worked on documenting several wild plant varieties, which are used for cooking and medicinal purposes. She used Google Keep and typed the details in the local language Marathi, sharing updates in WhatsApp groups.

In the Wanganpada hamlet of Pathardi, Ganesh Mahale works with Raspberry Pi-based devices. After learning to use a Raspberry Pi-based local wireless intranet module, he wonderfully packaged a community radio to share information and knowledge bytes related to agriculture and social issues. Among various initiatives, Ganesh worked with other community members to record the different rice and millet varieties in an open-source app called Epicollect for knowledge sharing on biodiversity, and also used an app called NoteCam to capture geolocation-marked photos for biodiversity mapping.

The importance of agricultural biodiversity encompasses socio-cultural, economic and environmental elements. “These native varieties were widely grown and eaten in the recent past, but are disappearing as seed companies have started commercialising hybrids and genetically modified variants,” explained BAIF, adding that community participation is the ideal solution for the conservation and sustainable use of these wild species. For the villages in Jawhar, biodiversity can also serve as a safety net for vulnerable households during times of environmental crisis and provide an income opportunity. 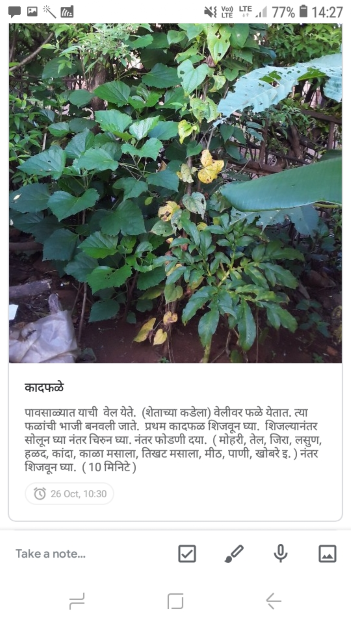 Details of wild plants used for different purposes captured by Sangita Bhoye on Google Keep (left) and a geo-location tagged photo captured through NoteCam for uploading on Epicollect for the knowledge-sharing platform (right). Image: BAIF

A women-led digital system of financial, utility and governance services

The lack of digital services for remote villages, combined with the lack of work options for young women, inspired the creation of the eDost programme, a digital system of services built and maintained by women. One eDost is a young literate woman belonging to the village who is trained to provide basic financial, governance and utility services to the community by leveraging internet connectivity and existing online portals, earning an income in return.

The eDost concept was first piloted in Maharashtra in June 2019 through a woman named Anjali Vazare, fondly called Anjali Tai, who uses a mobile phone to offer various digital financial services to the village community such as cash withdrawal, money transfer, mobile recharge and bill payment. This provides the community with savings in terms of money, time and effort due to reduced frequency of travel to the nearest town to access these financial services.

During the COVID-19 pandemic lockdown, the eDost services became even more important. When the Indian government began offering financial support to community members, the eDosts stepped up and offered financial services that enabled the community to withdraw money and recharge their mobile phones at their doorstep. Within a month, 10 eDosts offered services to 828 beneficiaries.

The programme has also given eDosts an income alternative. Offering digital financial services has become Anjali Tai’s part-time livelihood. “I began to feel the need to earn money to support my family due to the poor financial conditions in my house,” Anjali Tai explained in this piece about the programme’s impact on her life. She has also been inspired to continue seeding change: “The project has changed my life and empowered me and I want to spread this to many more women.” 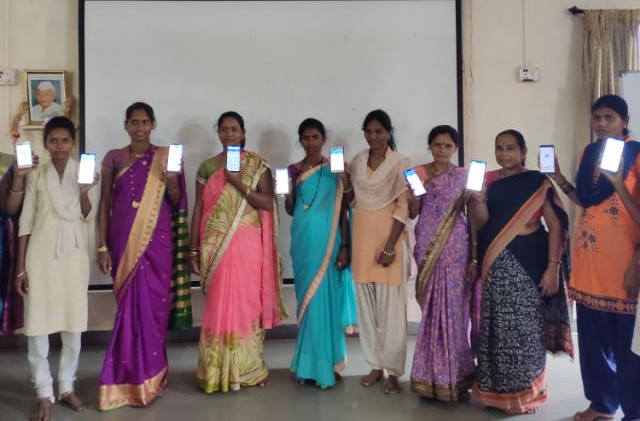 Some of the eDost women who were trained to provide basic financial, governance and utility services to the community. Photo: BAIF

There are currently 30 eDosts functioning and trained in providing many different services, such as applying for a driver’s licence or marriage certificate and booking tickets for travel. “Until now, these services were only available in town and cost twice the rate that eDosts charge,” BAIF reported. Recently, printing and photocopy services have also been introduced through the project, which has been well received by the community, especially the students who use it for their school notes.

The organisation also highlights that, since eDosts are women from the community, their presence can be leveraged to mobilise the community for awareness raising on various topics. “During the pandemic, BAIF conducted health training for the eDosts, so they could help to guide the community towards appropriate precautionary and curative measures,” explained BAIF, adding that the eDosts further conducted awareness sessions in their own locality, helping to reduce misinformation in this crucial moment.

This piece is a version of information highlighted by the BAIF Development Research Foundation as part of the project "Connecting the Unconnected: Supporting community networks and other community-based connectivity initiatives", adapted for the Seeding Change column, which presents the experiences of APC members and partners who were recipients of subgrants offered through APC projects. This piece was complemented with information from a story sent by Ramprasad V, Nirali Shah and Pooja Majgankar from BAIF to share reflections from their experience through the community networks learning grants initiative led by APC and Rhizomatica.