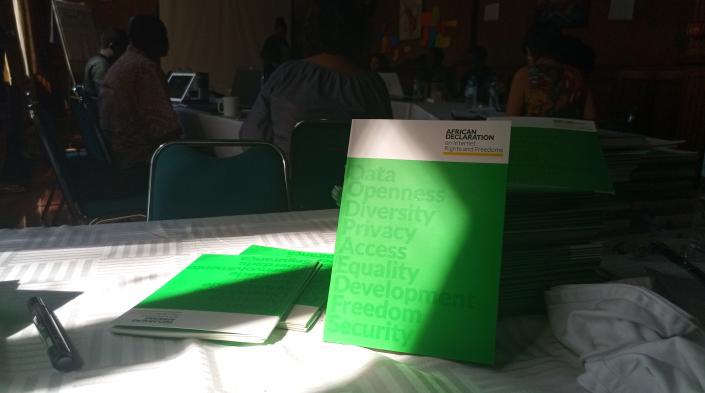 The African Declaration on Internet Rights and Freedoms is organised around 13 key principles, including affordable access, freedom of expression, the right to information, and openness. It is intended to promote uptake of human rights standards and principles in internet policy formulation and implementation on the continent and to cultivate the open and trusted internet environment necessary for Africa’s social and economic development needs and goals. The Declaration provides a framework that governments, businesses, the technical community and civil society can use to ensure an open and free internet.

Delegates at the Entebbe meeting affirmed that the Declaration, which was developed in 2014 and led to an African Commission on Human and Peoples’ Rights resolution on the internet as an enabler of freedom of expression, remains relevant and can spur the development of rights-based internet policy in the region. They also reflected on the problems that are affecting use of the internet in Africa today. Internet shutdowns ranked high on the list of challenges.

Attempts to suppress online expression across Africa have been growing, with full or partial internet or social media shutdowns in countries such as the Democratic Republic of the Congo (DRC), Gabon, Sudan and Zimbabwe since January of this year alone. Internet shutdowns, including targeted shutdowns of social media and specific apps, deprive users of an increasingly essential means to access information and to express themselves.

Other issues hampering the potential of the internet for social justice and development in Africa were identified, and these included arrests and intimidation of online users, filtering, censorship, government-sponsored online trolls, and a proliferation of laws and regulations that limit human rights on the internet and undermine access and aﬀordability – for example, the introduction of tariffs and taxes on the use of social media. Together, these developments weaken the internet’s potential to improve livelihoods, catalyse free expression and enhance civic participation.

Delegates at the meeting agreed to strengthen the Coalition of organisations and supportive individuals that formed around the Declaration and to continue to advocate for an open and free internet at national, sub-regional and continental levels. It was also agreed to grow the network in order to make it more diverse, inclusive and representative.

The African Declaration on Internet Rights and Freedoms Secretariat will convene another consultative meeting on 23 April ahead of the Digital Rights and Inclusion Forum (DRIF) in Lagos, Nigeria. Online consultations on the draft 36-month strategic plan with members of the Coalition for input and validation will be conducted prior to the meeting.

Read more about the “Securing human rights online in Africa through a strong and active ‘African Declaration on Internet Rights and Freedoms’ network” here.