Internet, schoolchildren and rural Pakistan: How to get community buy-in including for girls

Home / News / Internet, schoolchildren and rural Pakistan: How to get community buy-in including for girls 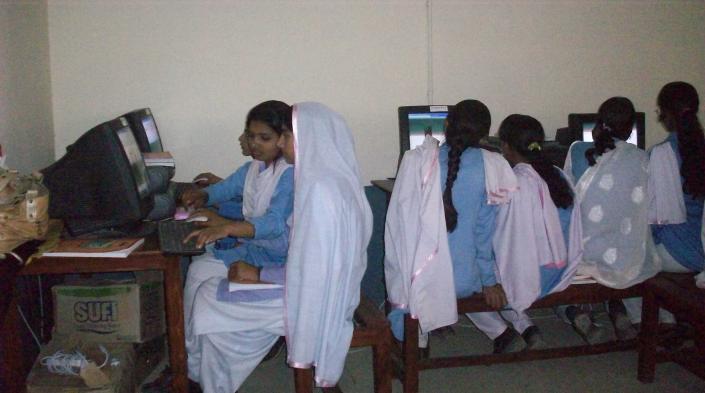 It was by coincidence that 29 year-old software developer Huda Sarfraz got involved in the Dareecha project. It was the first time the Centre for Research in Urdu Language Processing (CRULP) had directly taken on the social perspective of a project by taking technology to the people and the Lahore resident was excited about the new challenge. Sarfraz, as part of Dareecha (meaning “window”) set about training school children and teachers from the rural Punjab to use the internet so that they could eventually create their own content.

And create content they did – with their new skills, students and teachers in rural villages created 57 new, locally-relevant school and community web sites, which they presented in a competition held by Dareecha from June to August 2009. The judging panel, comprised of government officials, academia and ICT experts couldn’t help but notice the strong presence of women and girls among the winners. This was a sign that the Gender Evaluation Methodology (GEM), an evaluation methodology the Dareecha team had used to compliment other planning methods for the project such as outcome mapping, had helped them get through to a segment of the population that other more traditional planning methods may not have achieved: women and girls.

In fact the way they dealt with the different needs of both sexes meant that girls too could learn about computers – and the young girls were not letting this opportunity go. “Women teachers were quite insistent in getting the girls involved,” recounts Sarfraz “and there was more than one incident where girls were in tears because they wanted to join sessions that were already full.”

The quotas were the same for boys and girls which meant that there were about fourteen students per session working two to a computer. Because the girls were so persistent, a second, afternoon session was set up for a total of 30 girls. “We didn’t know what to expect but the girls were very insistent. We were also surprised that the parents were so willing to let them come to classes during the summer and at irregular hours,” explains Sarfraz. She also recalls the story of two girls, the daughters of the head master at a boys school who felt the training was so important that he took it upon himself to bring his daughters to the boys’ training. “I asked our trainers about how the boys reacted to this and was told that the head was a much respected teacher, so nobody said anything to the girls and things went on as usual.” The fact that the girls were accepted without question in the boys classes represents a significant shift in mentality by the community, and the father himself. “For me, it was the best part of the project,” beams Huda.

However this was not the case for everyone – Sarfraz remembers a woman teacher who missed training sessions because she was not allowed to travel without a chaperone. In an effort to accommodate her needs, the team made arrangements for the woman’s father to stay overnight as well. Their efforts were rewarded when the teacher later attended one of the sessions and the awards ceremony in Lahore, something that Sarfraz describes as a milestone for all involved.

Sarfraz is pleasantly surprised the Dareecha team was never rejected by the villages because, there can sometimes be a negative sentiment towards women gaining access to technology and new communication channels due to a fear that the exposure to new ideas and people will have a negative impact on girls. The desire to participate by so many girls in the programme, and their strong presence at the awards ceremonies (both as attendees and award recipients) sent out a clear message: we are willing and capable of taking part in the information society.

It is these cultural restrictions and obstacles to girls’ and women’s participation that are so often overlooked that GEM tries to address—breaking through old views about mobility, personal safety, lack of personal freedom and traditional responsibilities in the home. For the Dareecha team, GEM helped make the societal differences between men and women that they themselves had never questioned before explicit, and being able to formally address these inequalities allowed them to design a project that would make a real difference in the lives of rural boys and girls and their communities.

The Dareecha team used GEM throughout all the different stages of the project—planning, implementation and evaluation. “If we hadn’t learned about GEM, we would not have analysed our data with respect to gender,” says Sarfraz. “Initially we only saw two groups to work with – students and teachers. However because of GEM we looked at them as four—girl students, boy students, women teachers and men teachers.”

Not only did this data breakdown by gender give the Dareecha team a better understanding of the scope of the different realities related to ICTs for the groups, it allowed the team to plan the training sessions for maximum comprehension by all groups. Instead of lumping all the students into one group with a male trainer, female students were given a female trainer and male students were given a male trainer. Public schools in Pakistan are segregated to begin with, so since it was not culturally acceptable to send men into girls schools, a female-only team was selected for the female students. Even the way the material was presented, was catered to the different groups according to Sarfraz. “The books we prepared were the same, but the slide shows were customised for each group.” For example, slide shows included gender-specific examples and questions, according to the different interests of genders, like local political figures that interested the boys and mehendi or henna design for girls. The Dareecha team also ensured they followed social norms when teaching about email and created separate groups for girls and boys and were also extra careful about online security. “We thought it would have a higher impact in gaining acceptability from girls schools and parents, because people generally don’t worry about who boys communicate with and how, but are more concerned about the safety of girls.”

More than a simple planning, monitoring and evaluation approach, GEM becomes a way to see daily interactions and social norms though a “gender-specific lens” because GEM allows evaluators to dig deeper and think about why things are the way they are, and how to consciously address the reasons through project design and implementation. In Pakistan GEM helped turn a social technology initiative into a process of change for all those involved – the Dareecha team, students, teachers and community members in these rural areas.

Learn more about the “Dareecha project”.