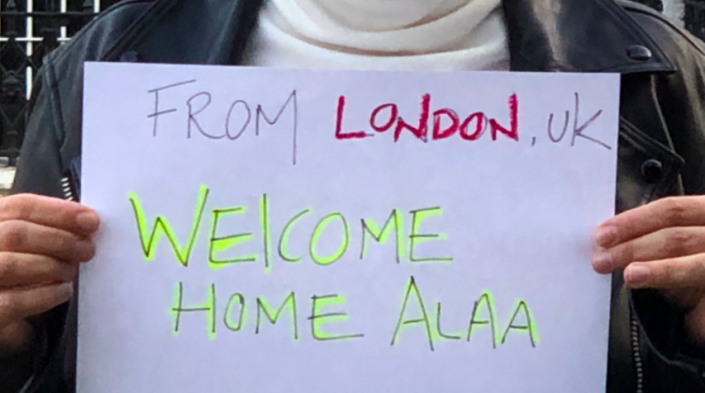 By Global Voices, IFEX, APC and others

A version of this statement was originally published on advox.globalvoices.org on 29 March 2019.

Egyptian blogger and activist Alaa Abdel Fattah was released by authorities late on the night of 28 March after serving five years in prison for defying a protest ban. The news broke on Twitter when his sister, activist Mona Seif, tweeted simply: "Alaa is out." She later delighted her brother's friends and allies by posting a photo of the renowned Egyptian revolution activist playing with his family's dog, Toka, who he met for the first time.

Supporters around the world have begun posting photos on Twitter with signs reading "Welcome Home Alaa!".

Alaa was a leading voice among Egyptian bloggers and technology activists in Cairo approaching and during the Egyptian Revolution. Together with his wife, Manal Hassan, he helped develop a range of technology and political activism projects, working with activists and bloggers in the region and beyond, including many members of the Global Voices community. Both Alaa and Manal, who is a founder of APC member Motoon, are also close friends of APC.

The 37-year-old activist was arrested and taken from his family's home in November 2013. More than one year later, in February 2015, he was finally tried and sentenced to five years in prison for "organising" a protest under a 2013 protest law that prohibits unauthorised demonstrations. While he did take part in a protest against military trials for civilians on 26 November 2013, Alaa had no role in organising it. His sentence was confirmed by Egypt's Court of Cassation in November 2017.

Alaa comes from a family of prominent human rights advocates, including human rights lawyer Ahmed Seif El Islam, Alaa's father, who was jailed multiple times under the regime of Hosni Mubarak. Abdel Fattah's sisters, Mona and Sanaa Seif, are also human rights defenders who have long campaigned against the military trials of civilians in the country.

Alaa has been jailed or investigated under every Egyptian head of state who has served during his lifetime. In 2006, he was arrested for taking part in a peaceful protest. In 2011, he spent two months in prison, missing the birth of his first child, Khaled. In 2013, he was was arrested and detained for 115 days without trial.

Following his release, Alaa will be made to spend every night in his local police station for an additional five years. For now, however, his family, friends and supporters are relieved to hear that he is out of jail. And so are we, the APC community. Welcome home, Alaa.