Spotlight on national and regional initiatives at the global IGF 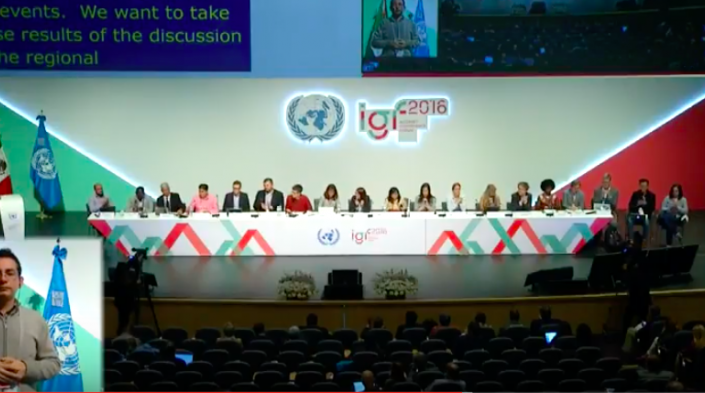 National and regional Internet Governance Forum initiatives (NRIs) play a key role in internet governance. They are organic and independent formations that discuss issues pertaining to internet governance from the perspective of their respective communities, while acting in accordance with the main principles of the global Internet Governance Forum (IGF). On 7 December, during a plenary session at the 2016 IGF in Guadalajara, Mexico, representatives of NRIs around the world shared stories of the progress they have made, the challenges they face, and the success they have achieved.

“A great deal of progress has been made in internet governance through different national and regional fora, involving the different stakeholders, and the results are now being seen,” said the chair of the session, Víctor Lagunes, representing the host country, Mexico. He pointed to the renewal of the IGF’s mandate in 2015 as a show of commitment to an increasingly inclusive and sustainable internet. “Throughout these years this discussion has been strengthened not only at a global level; regions and nations around the world are more and more actively participating in these fora, and that’s something that’s greatly valuable for all parties involved.”

Lynn St. Amour, chair of the IGF Multistakeholder Advisory Group (MAG), served as co-moderator of the session, and stressed that the work of NRIs should be embedded even more in the work of the global IGF. She noted that the Tunis Agenda adopted at the World Summit on the Information Society (WSIS) fully recognised the importance of the multistakeholder approach in solving some of the more complex internet-related policy issues, and encouraged the development of multistakeholder processes at the national, regional and international level to discuss and collaborate on the development of the internet. The core characteristics and principles of the NRIs are that “they’re organic, based on community desire and need, and take direction from all the stakeholders at whatever level, national, subregional or youth,” she explained, adding that these characteristics and principles are shared by the global IGF.

Her fellow co-moderator, Anja Gengo, the IGF Secretariat’s Focal Point for NRIs Engagement, emphasised that these initiatives are growing rapidly: while there were 37 national and regional forums in 2015, in 2016 there were 72 officially recognised NRIs, with the majority of meetings scheduled for the second part of the year, all over the world.

During the session, representatives of national IGF initiatives talked about experiences in countries like Armenia, where special emphasis has been placed on inclusive access for visually impaired and blind people; Ghana, where the government is investing in fibre optic laying and capacity building; Georgia, where quotas have been established for the national IGF executive committee to promote the inclusion of civil society; and Uruguay, which held its first national IGF in May 2016, with a focus on internet for development and social inclusion, through initiatives like the One Laptop per Child programme known as Plan Ceibal to name just a few.

A number of regional initiatives were also discussed at the plenary. A representative of the Caribbean IGF explained that the main goal in this region is to facilitate a coordinated approach to internet governance, which has resulted in outcomes like a proliferation of internet exchange points (IXPs), as well as building awareness on internet governance concepts, values, principles and issues across the region. He also noted that Trinidad and Tobago and Barbados are now engaged in setting up national IGFs, with other countries in the region like Belize and Jamaica planning to do the same. Meanwhile, in Central Asia, made up of a number of former Soviet republics like Kazakhstan and Kyrgyzstan, among others, there is an emphasis on the way governments use the excuse of extremist content on the internet to block entire websites and repress human rights. In Southeastern Europe, which covers countries from Armenia and Georgia to Bulgaria, Romania and Serbia, among others, one issue of particular concern is local content in local languages, which is especially challenging due to the wide variety of scripts used in the region. Another key challenge is reducing dependence on mobile internet access by investing in fibre optic networks.

The need to ensure that national and regional forums are increasingly inclusive was touched on in many of the presentations. According to Julián Casasbuenas, director of Colombian APC member organisation Colnodo and current chair of the APC board of directors, greater efforts must be made to involve youth, people from rural areas (given the significant urban-rural divide) and small and medium-sized enterprises in internet governance issues. This was the motivation for the creation of the Colombia IGF in 2014.

The gender digital divide, the need for increased production of local content and the promotion of open government and open data were other key priorities mentioned among the challenges. There was also significant emphasis on issues related to security and privacy.

“There is no trade-off between privacy and security,” stressed Sandra Hoferichter, speaking on behalf of the European Dialogue on Internet Governance (EuroDIG). “Security needs to be a collaborative effort. Openness requires shared responsibility, and companies and governments may not be completely held responsible for what people do online,” she said, adding, “Regulation is important but most important is an ethical approach.”

For her part, Valentina Pellizzer of OneWorld Platform, a member of the APC network since 2007, shared the experience of the national IGF in Bosnia and Herzegovina. “Dialogue is essential in a country that went through a war and is in transition,” she said, noting that this has led to a particular emphasis on online safety. “At the first IGF we talked about safety in a different way. We wanted to explore the two extremes of safety: the safety of the citizen, the safety of women and the kind of support they can get when they go to the national authority asking to be protected because they’re attacked online, and the safety translated into security by the government and the state which results in complex systems of surveillance and control and paranoia,” she explained. As for next year’s national IGF, the country’s fourth, “We are hoping to host a truly inclusive conversation where everyone feels engaged and can propose, support, and build an open, safe internet and an internet of trust for all people.”