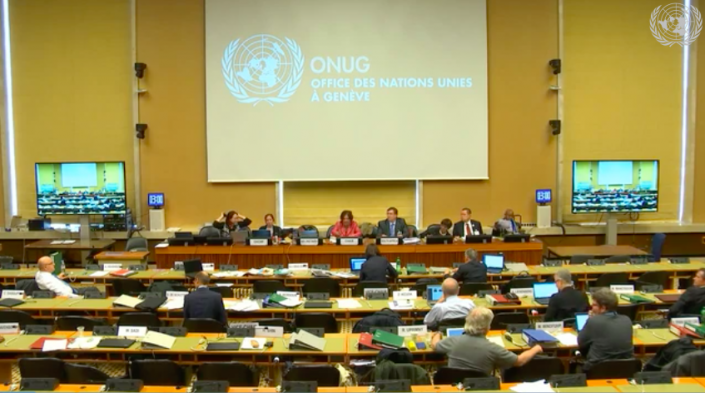 By APC and others

South Africa risks continued failures to fulfil its human rights obligations to people if the government’s austerity policy is maintained, civil society organisations have warned at the United Nations Committee on Economic, Social and Cultural Rights (the Committee). The organisations outlined the systemic challenges that impede access to adequate health care, housing, education, work, social security, food and land to the Committee and urged government to tackle these without delay.

The government has also sent a delegation, headed by Deputy Minister of Justice, John Jeffery, to make submissions on its implementation of the Covenant and participate in dialogue with the Committee. The government submitted a report prior to this week's hearings, which is available, along with reports by the civil society organisations and the SA Human Rights Commission (and further information about the hearings) here.

SECTION27’s Daniel McLaren, on behalf of the Institute for Economic Justice and the Centre for Economic and Social Rights described how, in response to misplaced concerns about public debt, cuts in the fields of health and education, among others, were compromising access to––and the quality of––these critical services. McLaren argued that “greater taxation of incomes and wealth and more effective government expenditure is essential if the promises of the International Covenant and the Constitution are to be achieved.”

Mandy Mudarikwa of the Legal Resources Centre, on behalf of a number of partner organisations, urged the Committee to integrate an intersectional and gender centred dimension to discrimination which addresses the power imbalances that exists between marginalised and invisible people and the general population. This would ensure that their specific needs are included and catered for as a way to achieve substantive equality. “We must promote inclusion, diversity and tolerance in our pursuit for a more equal South Africa”, she said.

The Alternate Report Coalition – Child Rights South Africa (ARC – CRSA) a civil society alliance on children’s rights including the Centre for Child Law, University of Pretoria; Children’s Institute, University of Cape Town; Lawyers for Human Rights, and the Legal Resources Centre presented on socio-economic challenges facing children that require priority attention from government. With over 36% of children (7 million) living under the food poverty line of R547/month and 27% of children under five years of age being stunted; ARC-CRSA called on government to increase the low amount of the Child Support Grant from R400 to the level of the food poverty line. Both the UN and AU committees on children’s rights have recently recommended an increase to the CSG but the government has no plans to increase its value. This is all the more necessary given the substantial increases in the cost of food and transport resulting from recent increases to VAT and the fuel levies.

Rone McFarlane of Equal Education and Mbekezeli Benjamin of the EE Law Centre raised particular concerns regarding South Africa’s declaration that it will progressively realise the right to basic education, within available resources. Such an approach goes against its constitutional obligation to immediately realise this right. They also highlighted issues still impeding the full realisation of the right to education, such as the inadequate provision of learner transport and safe school infrastructure, and the illegal exclusion of undocumented learners. Their joint submission also raised concerns over discrimination against single parents in school fee exemption applications and called for the stricter regulation of private actors in education.

Gladys Mirugi-Mukundi from the SA Ratification Campaign said that a decent standard of living should be adopted, based on the Constitution and the governments commitments in the International Covenant. The Campaign made a number of recommendations specific to the rights to food, housing, water and sanitation, health care and education.

The Association for Progressive Communications, Media Monitoring Africa, and the Right2Know Campaign made a submission that focused on access to the internet in South Africa – particularly for disadvantaged and marginalised persons and groups, including those living in rural and remote areas – and the extent to which the Government of South Africa is ensuring that people are able to benefit from the potential of the internet as an enabler of economic, social and cultural rights.

Isobel Frye, the Director of Studies in Poverty and Inequality Institute raised concerns about the continuing failure of the state to provide social assistance to people aged 18 to 59, despite this right being guaranteed both in the Constitution and the International Covenant.  “This continuing failure” she said, “is in breach of the state’s obligations.  In addition, it undermines the fundamental right to dignity of millions of poor South Africans who are condemned to face severe destitution on a daily basis, despite the increasing levels of extreme wealth, much of which was accumulated under the racist Apartheid policies”.

Timothy Fish Hodgson of the International Commission of Jurists said “unlike the South African Constitution, the International Covenant contains a right to work. Since ratifying the Covenant in 2015, the government of South Africa now has a legally binding commitment to progressively eliminate unemployment and ensure all work is decent work. This includes a commitment towards ensuring that the national minimum wage is at a level that allows all workers and their families to secure an adequate standard of living for a life of dignity”.

Amnesty International said that “the Committee’s review is a moment to address increasing inequalities, including barriers to reproductive health services, and the government’s failure to provide access to safe abortion care. In 2017, Amnesty International found only 7% of the country’s public health facilities offered abortion services, and that the government has failed to tackle pervasive stigma towards women and girls seeking abortion services, or ensure accountability for health professionals who refuse to uphold their ethical responsibilities to provide abortion care.” The organisation also raised concerns about the human rights impacts of the criminalisation of sex work in the country.

The UN Committee is in dialogue with the government until 03 October. In a few weeks’ time, the Committee will issue its “concluding observations” on the steps the government should take to comply with the provisions of the Covenant. These provisions require that government use all of its available resources to protect and fulfil the rights of people in the country, especially those affected by discrimination. As civil society organisations we expect South Africa to honour these commitments and to reverse austerity policies that stand to adversely affect the lives of millions of people.