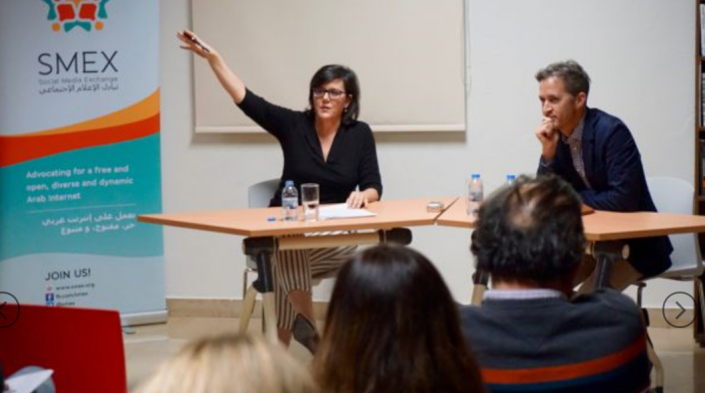 Social Media Exchange (SMEX) is a registered Lebanese NGO that works to advance self-regulating information societies in the Middle East and North Africa (MENA). While they engage globally, Lebanon is their home, making Arab society and culture their primary context for action. APCNews interviewed Jessica Dheere and Mohamad Najem, the co-directors of SMEX, which just joined the APC network.

APCNews: SMEX advocates for a free and open, diverse and dynamic Arab internet. When and how did you decide that this was key to development in the region?

Mohamad: We decided to found SMEX in 2008. During the 2006 war, blogs were really critical in getting the word out about civilian casualties and we took note. Jessica came to Lebanon in 2006 as an independent journalist and did some freelance digital journalism after the war, which is how we met. I helped her with interpreting interviews with cluster bomb victims and other reporting. In 2007, Jess was asked to co-facilitate a digital journalism workshop at AUB (American University of Beirut), and she was also getting a master’s degree in media studies at the time and was taking all her coursework online. In the fall of 2007, she took a class called Collaboration in Networked Spaces that was all about the sociology and potential of social media. Finally, in February 2008, she was approached by a donor to do a series of social media workshops, which no one was doing at the time. So all four together – the digital lens on the 2006 war, the AUB workshops, that particular class, and a funding opportunity – created a perfect storm from which the idea to start giving workshops on using social media strategically emerged. We didn’t call it SMEX until a little later.

Jessica: We started by giving introductory workshops on social media to civil society organisations and then ran some training of trainer programmes. There was a lot of demand to integrate digital and social media into advocacy and peacebuilding by both local organisations and donors. Later, after witnessing some laws being drafted to govern the online sphere in 2010 and the Arab revolutions, our focus shifted to digital rights and policy, though we continue to do this work using our media development skills.

In terms of impact it’s never easy to grasp, since we’re dealing with issues that are solved only over the long term and in rapidly changing political ecosystems. As you know, most support for what we do, however, is very short-term. That said, we can say that in almost every topic we advocate for, we raise awareness for communities around us (activists, journalists, civil society groups, etc.), we get media coverage, and we engage directly or indirectly in a discussion with the government to tackle the subject matter.

Also, many of the people we’ve trained over the years are now in communications positions with local or international civil society organisations. We also have stopped flawed legislation from passing and are bringing issues, like state surveillance in Lebanon, into public view.

We’re now preparing our first strategic plan which will help us measure our impact more over the next three years. As part of our plan, we are preparing to launch a space within SMEX called Masaha, which as you know means “space”. The idea is to create more space for conversation, debate, dialogue on digital rights in the region through workshops, screenings, panel discussions, advocacy and digital security clinics, etc. We hope to build an audience both inside and outside Lebanon through live-streaming, and encourage all APC members who may be passing through to pay us a visit and co-work with us – or even host an event.

APCNews: What are the biggest priorities in terms of internet rights for MENA, considering the huge challenges the region faces?

Mohamad: We think the main challenges when it comes to internet rights in the region are:

APCNews: Why are you based in Lebanon? Is there something particularly promising/challenging about the Lebanese context?

Mohamad: We are based in Lebanon originally because I am Lebanese, but we stay here because Lebanon enjoys more freedom than its surrounding environments. We can critique the government activities, engage them in a discussion, and try to change things when we can. We can also be a safe space for activists coming from other countries and a crossroads, since everyone likes to visit Beirut.

APCNews: Give us an example of a successful initiative or project your work has helped advance.

Jessica: Less than a month ago, a group initiated a campaign to boycott telecom operators in Lebanon. They charged that the operators were too expensive and weren’t providing services on par with other operators. But they didn’t cite a lot of evidence to back up their claims. SMEX noticed the campaign and also complaints that there wasn’t enough data to back up their assertions. We decided to research the issue and published a blog post with evidence from third-party reports supporting their claims. As a result, many more people supported the campaign than would have and, as one observer told us, SMEX’s work helped change the public discourse. The boycott succeeded and secured a meeting with the telecom minister; also the campaigners used the data we provided within the blog post during their meeting.

APCNews: Why did you join the APC network? What do you think APC can help SMEX with, and how do you hope to contribute to the work APC does?

Jessica: We’ve admired APC’s work, politics and people for a long time. We were encouraged to join but, honestly, the membership application was a bit daunting, so we kept putting it off. Last year, we finally got it together, with the support of APC staff like Nadine Moawad and Karel Novotny. We did so because we felt that SMEX had matured to a point where we would not only benefit from being part of such a network but could also contribute to it.

Mohamad: We’re still getting a grasp on the organisational culture and how to plug into various conversations. It seems so many people have been involved in the conversations for such a long time, so it’s hard to know how/where to jump in. I think in the near future we will start asking for input/partners on various projects, research, ideas. Similarly, we can be a strong resource for digital rights issues in the MENA/Arab region.