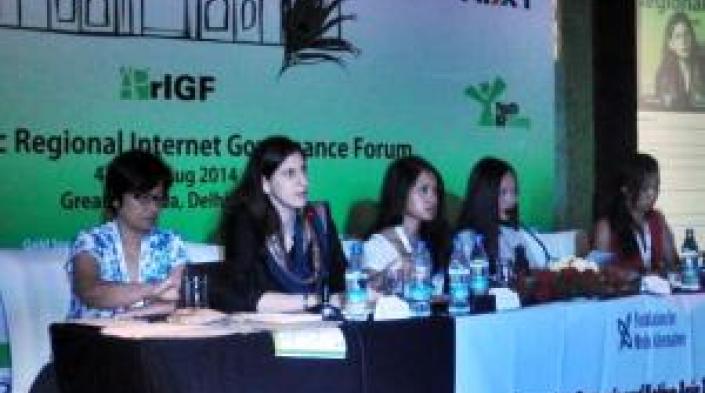 By FF and TB Publisher: APCNews

Partners of the “End Violence: Women’s rights and safety online” project have participated in three regional internet governance forums (Africa IGF, Asia Pacific IGF, LAC IGF). APC interviewed our members who attended and the impact their participation had on tech-related violence against women.

APCNews: How can we assess the impact that our participation had at the regional IGF?

Dafne Sabanes Plou (LAC IGF): It’s not very easy to quantify the impact of our interventions, but the fact that WRP’s representative in LAC was invited to address VAW and ICT issues as part of a rights agenda in a pre-IGF meeting with Central American organisations can be seen as a response to our work highlighting this matter. During LAC IGF there were other organisations that expressed their interest in our work, like Demos, from Guatemala, and Fundación Redes, from Bolivia. Fundación Redes requested assessment on this issue and I exchanged information with them after LAC IGF. The same with government representatives from Panamá and Costa Rica that requested more information and results of our previous research.

Nica Dumlao and Lisa García (Asia Pacific IGF and Africa IGF): Events such as the regional IGFs are spaces for advocacy, and also for networking. This is a space to reach out to people and tell them about what we do. One way to gauge the effectiveness of our participation is through the number of people we have reached, especially the number of those who understood what we were talking about.

For instance, during our workshop, we knew we somehow made a difference because during the open forum, one male participant from Nepal congratulated us for having a workshop that highlighted gender rights. After the workshop, there were participants who approached the speakers to talk to them about human rights and gender issues.

Our impact can also be assessed by the activities and follow through that can come next after the regional IGF. Organisations that we were able to tap and meet along the way agreed to collaborate with us in the future in the fight for internet rights. For example, ISIF Asia, Thai Netizen Network, Internet Democracy India agreed to meet in the global IGF, and explore possible collaboration during the RightsCon in Manila.

APCNews: Did specific activities organised for APC’s End Violence project impact the agenda and the debates at regional IGFs?

DSP: Participation in one of the panels was key to let people know about our work on VAW and ICT issues. The discussion in plenary and with remote participants after the panel was productive as there were questions and comments from the audience.

ND and LG: FMA organised a workshop for the APrIGF titled “Towards a dynamic and active internet governance rights-based space with gender perspective” under the sub-theme Human rights and internet. The motivation for this workshop is the ‘disconnect’ between the global discourse and regional/national discourse on Internet Rights, Women’s Rights. While there’s already a great progress in the discussion globally on the promotion and protection of human rights in cyberspace, the discussion in the grassroots, or in the region is still challenged and moving slowly. The workshop aimed to draw the current landscape of the struggle for an internet governance in the region that incorporates a rights-based approach and has gender perspective. It also aimed to encourage and further strengthen cooperation among stakeholders for advocacy.

I believe that it made an impact on the agenda and the debate in the region because it is one of the very few, if not the only workshop, that considered gender in the discussions, and with a majority of women speakers.

The results of the workshop we had was shared in the plenary and we highlighted the need for the centrality of human rights issues in spaces such as regional IGFs. We also shared that the voices of women and marginalised groups should be heard. We just hope that the conclusions and recommendations we shared would make a difference in future regional IGFs.

APCNews: How do you think participation in regional IGFs and organisation of specific activities on women’s rights and VAW influences discussions at the global IGF?

ND and LG: One of the things we immediately noticed in the APrIGF is that it is male-dominated. The official opening of the event had an all-male panel to welcome and introduce the event. In the workshops that were held, the speakers were also mostly men. Many of the topics were also more technical in nature and gender-blind. In fact, in our workshop which I facilitated, I made mention that unlike the other panels in the event, be it at the plenary or the workshops, ours had the most number of women. There were 5 of us women seated in the panel. Although I also mentioned that we also have men in our panel, but who were participating remotely. The other remote speaker from Fiji also happens to be a woman.

Nica and I tweeted about the gender imbalance at #APrigf. We talked to some of the participants in the IGF about this and also made sure that our report to the plenary would reflect the need for women’s voices to be heard.

One of the conclusions reached in the workshop is that while there are women present in many internet governance spaces, they are not really heard. Many among them are on the sidelines.

There is a need for women to be heard in such existing spaces. We may not be speakers, but in the workshops that we’ve attended, we were able to raise issues that others take for granted, such as gender issues and VAW.

APCNews: Which were the most relevant issues to tech-related VAW that emerged at the regional IGFs?

ND and LG: It is only in the workshop that we organised that the issue of tech-related VAW emerged. One of the speakers in our workshop from the Philippines raised the issue of the internet as a tool for power, pleasure and pain, especially among the transgender. Some other observations we made based on our participation in the APrIGF can be listed as follow: There were not a lot participants from civil society who attended. Most of those present are from the industry, there were many technical people. Most of the workshops therefore tend to discuss more technical issues. There were less countries represented in the IGF and in the workshops. There were also less sharing of country-level experiences in the workshops. Gender imbalance in terms of speakers at the plenary and in workshops.