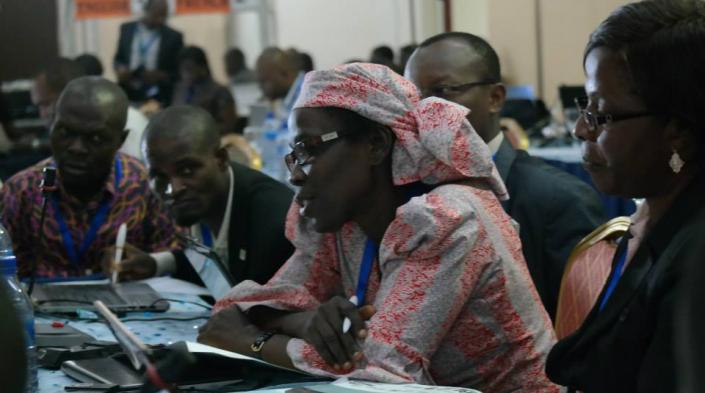 “As Africans we care about the internet, and not only about getting access to it but we also care about how, and by whom, it is governed,” says APCs Emilar Gandhi who recently returned from the African Internet Governance Forum (IGF) in Abuja, Nigeria, where she co-organised a workshop on public access to information and communications technologies (ICTs). In an online interview, Emilar spoke to APCNews about what public access would look like in Africa. Advocating to include ICTs in the post-2015 UN development agenda, Emilar will take her message to the upcoming Global IGF.

How can ICTs foster development?
ICTs promote development across many dimensions – they transform societies and fuel the global economy. At their most fundamental level, ICTs enable organisations to be more productive, thereby spurring economic growth and helping organisations to be more competitive. Consumers’ increased internet access has contributed to the growth of many industries and small to medium enterprises in Africa. In the financial sector, for example, mobile phones have transformed consumers banking behaviour and promoted financial inclusion.

ICTs can also expand the reach and effectiveness of social development projects and have already broughtimportant benefits in such areas as healthcare, education, and environmental sustainability. Public-sector uptake of ICTs is also making governments more efficient, accountable and their decision-making more transparent.Yet despite their potential, the benefits of ICTs are not spread evenly or equally. Fostering social inclusion and economic growth is one the key challenges facing policymakers in Africa.

What are the emerging trends in access to information at the moment, worldwide, and in Africa?
In general, affordable internet services still remain a challenge for most Africans. In 2012, the ITU estimated internet access to be 77% in Europe and a measly 7% in Africa. Broadband access also follows similar patterns.

Trends in Africa indicate that more people are using internet enabled mobile phones (smartphones), tablets, personal computers such as laptops and notebooks (smaller laptops). There has been rapid growth to internet access but the majority of people still remain outside coverage areas and the cost of access is very high for those who are connected. Mobile broadband has readily been adopted but where it’s available, speeds are comparatively low, and it’s very costly.

While internet access is becoming easily available across urban cities in Africa – rural dwellings are still poorly provided with ICT infrastructure and services. Access inequalities are even more visible when you look at marginalised groups, such as women, people with disabilities and in least developed countries in general. This makes internet access both a regulatory issue and a rights one.

We also need to realise that there is too much focus on mobile and not enough on cross cutting technology that needs cross sector collaboration, especially at the government level. National broadband strategies have been adopted widely but these lack targets for affordability or accessibility and rely too much on existing mobile operators to meet demand, rather than opening markets to drive competition and lower prices.

What does public access to ICTs mean in a development context in Africa?
For many Africans, broadband access in our homes will remain a rusty pipe dream. For some, schools, libraries and internet cafes still remain the only way to access the internet. We need to work against is the idea that public access isn’t needed any more because everyone will have a smartphone or tablet. .Even if they do, the in-depth research done by the Washington University’s Technology and Social Change Group shows that people still want technical or content support and an accessible safe space out of the home or work environment.

Also, thinking that public access is the way to bring the next billion online is problematic. The people who are already online also need public access. Most of those who are online in Africa are barely online due to high cost of accessing the internet , low speed and limitations of mobile phones such as poor interface and display size.. Of course, better public access will also help those who have no other form of access, but it will not be a billion.

During the workshop you organised with International Federation of Libraries Associations (IFLA) on public access to ICTs, what concrete options did you discuss?
Libraries are ideal places for the provision of public access; it’s efficient to build on existing infrastructure and resources. Librarians are respected neutral parties who already know the importance of access to information. However, there is a need to support librarians build up their technical skills.

Schools are also ideal, but the school system may need to change policy to allow non-students access to the internet at non-schooling times.

A few postal systems are considering giving everyone email addresses, and a place to receive physical goods, and to obtain public access. The Universal Postal Union (UPU) has been active in promoting this idea but not enough postal systems are doing this.

In rural areas, energy is a key limitation. Using solar energy costs ten times as much as electrification. There are some options to moderate the costs. In Senegal, for example, the Universal Service Fund could be used to fund rural electrification. Another possibility is to build rural renewable energy microgrids with ‘built-in’ connectivity, a much cheaper alternative to solar energy. There are also entrepreneur/community models, like Mawingu.org in Kenya.

What about local content, how can that be developed and accessed?
There is no single approach to local content development. We are an oral people. Our heritage, culture and knowledge is hidden in oral stories, music and art. These should be recognised, recorded and shared with the world. However most of this knowledge is not accessible to local people and there exists a “content divide”. Technology can help create, preserve, record and disseminate content. It empowers users as content creators and allows for peer reviewed knowledge exchanges.

Developing local internet industries should be a high priority for Africa. Through robust and effective internet country registries (called ccTLDs), countries can begin to reap the benefits that come with a well-established national internet identity. African regional and continental identities such as “dotAfrica” and regional domains are needed to ensure localisation of cost and traffic within the continent.

Access to relevant content is going to become much more of a key issue as we solve connectivity issues and the price of access devices such as tablets continues to drop. In order for content to be developed locally, there needs to be a functioning internet ecosystem that provides affordable high speed connectivity. This speaks to the need to invest in Internet Exchange Points (IXPs), data centres, iHubs fibre backbones, alternatives to mobile broadband for example Television White Spaces (TVWS) and other fixed wireless options to drive competition.

It all comes down to ensuring an enabling policy environment and coordination between different government departments. Universal service agencies need to link with the government initiatives, such as e-health, e-agriculture. There is also a need for collaboration with the private sector such as in iHubs and Public Private Partnership (PPP) backbones. A PPP is an agreement between government and private organisations to develop, operate, maintain and market a network by sharing the risks and rewards.

What happens next?
The ideas shared at the workshop in Abuja will feed into the discussions on the new post-2015 development framework taking place at the UN in New York. The messages about ICTs will also be taken to the meeting of the Dynamic Coalition on Public Access in Libraries at the Global IGF in Istanbul, Turkey in September 2014.