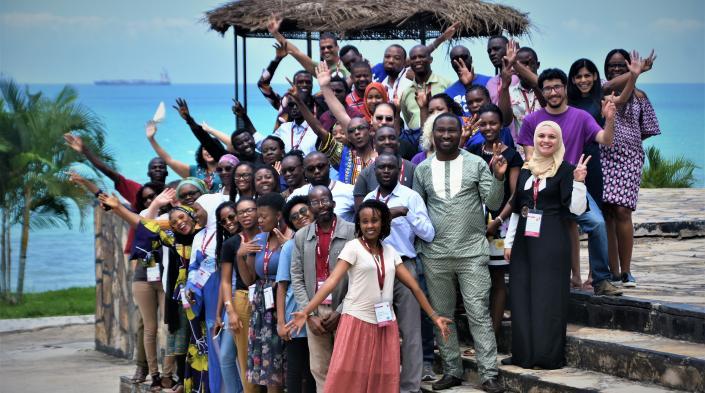 Internet governance is understood as including the development and application of shared principles, norms, rules, decision-making procedures, and programmes that shape the evolution and use of the internet globally. As the information society continues to expand, so too does the need for effective, rights-based development of cyberspace regulation and structures. APC and its network have been deeply involved in this crucial area of internet development since our inception, bringing civil society to internet governance discussions, advocating to protect the publicness of the internet and calling for more accessible, democratic, transparent, accountable and inclusive internet policy and decision-making processes.

Effective internet governance is also one of the key result areas outlined in our 2016-2019 strategic plan. Over the past few years, APC has focused specifically on increasing the capacity of civil society and policy actors, particularly those from the global South, to contribute to and influence internet governance processes, and encouraging formal recognition within internet policy spaces of the need for greater inclusion, transparency and respect for human rights through agreed principles and in practice.

Let’s take a look at the APC community’s contributions to more effective and inclusive internet governance throughout the world in 2018.

In 2018, the Internet Universality Indicators were finalised and adopted by UNESCO. These indicators are based on the R-O-A-M principles, which envisage an internet built around human rights (R), that is open (O), accessible (A) and developed and governed through a multistakeholder approach (M). They are conceived as a new tool to help governments and other stakeholders develop a clear understanding of their country’s digital environment, assess how that environment adheres to UNESCO’s four R-O-A-M principles, and create policy and practical approaches to better align with these principles as access to and use of the internet expand. The indicators were developed for UNESCO by the APC-led Internet Indicators Consortium, which included ICT Development Associates, Research ICT Africa and LIRNEasia, coordinated by Anriette Esterhuysen with David Souter as the primary author and Anri van der Spuy as lead researcher. UNESCO convened a multistakeholder advisory board (MAB) and APC, working together with UNESCO and members of the Consortium, facilitated an extensive consultation process with hundreds of inputs received from governments, civil society, and the academic, business and technical communities.

Exploring an “Internet of Trust” at the global IGF

APC and its network made extensive contributions to the event, in the capacity of organisers, moderators, panellists and attendees.

Addressing the connectivity gap in a meaningful and inclusive way was one of the dominant themes of the IGF, as reflected in several of the sessions in which APC members and staff participated, including Connecting and Enabling the Next Billion(s), Spectrum for Community Networks, Innovative Approaches to Connecting Underserved Areas (featuring Fantsuam Foundation, Rhizomatica and Digital Empowerment Foundation) and the Dynamic Coalition on Community Connectivity (featuring AlterMundi and Guifi.net). The 2018 edition of Global Information Society Watch (GISWatch), which focused on community-owned networks for the provision of physical communications infrastructure, was also launched during the IGF. With 43 country reports and eight thematic reports, the publication is a practical and theoretical resource on building and sustaining community networks, bringing together the work and expertise of multiple APC staff and members.

The discussion around cybersecurity was also an important feature of the 2018 IGF. APC’s Anriette Esterhuysen, who is a member of the Global Commission on the Stability of Cyberspace, spoke on the Proliferation, Cyber Stability and State Responsibility panel, which assessed the impact of cyber arms proliferation on cyber stability and examined the ethical and legal responsibilities of states in ensuring cyber stability. APC also participated in the Best Practice Forum on Cybersecurity, which addressed the importance of norms and multistakeholderism and the need for rights-based cybersecurity laws.

Both the Disco-tech IGF pre-event co-hosted by APC and Hivos/Digital Defenders Partnership, and the Point of View-organised session, “I Can't Use This App: Closing The Web Accessibility Gap”, sparked important conversations around internet accessibility.

One of the few sessions to focus exclusively on gender was the Dynamic Coalition on Gender and Internet Governance, organised by APC members Point of View and Foundation for Media Alternatives, which covered a range of issues and noted the growing conversation around gender at the IGF. The Best Practice Forum on Gender and Access, in which APC also participated, considered issues of access and the possibilities provided by alternative connectivity for women.

Sessions on the online violent radicalisation of youth and countering misinformation online featured representatives from APC members CIPESA and Media Matters for Democracy, respectively. Meanwhile, SMEX organised and Paradigm Initiative participated in a panel on making national laws good for internet governance, and Media Matters for Democracy and Digital Empowerment Foundation joined a panel on the hidden aspects of digital inclusion.

Highlights of the more tech-focused panels included a session on artificial intelligence (featuring KICTANet) and an APC co-organised session on algorithmic transparency.

To bookend our participation in the IGF, APC provided an overview of priorities and expected outcomes for the forum and, following the event, submitted reflections to the IGF Community Public Consultation.

The 2018 African IGF (AfIGF) took place in Khartoum, Sudan on 4-6 November. Organised by the African Union Commission (AUC) with the support of the Government of Sudan, the seventh edition of the event brought together over 300 participants from government, the private sector, academia, research institutions, the technical community, media and civil society organisations under the theme “Development of the Digital Economy and Emerging Technologies in Africa”. Multiple APC members were involved in the forum as presenters, moderators and organisers, including the Arid Lands Information Network (ALIN), CIPESA, KICTANet, PROTEGE QV, The Gambia YMCA Computer Training Centre, Zenzeleni Networks, and Makane Faye, who was a member of the AfIGF secretariat. In addition, APC’s Anriette Esterhuysen participated as a panellist, in sessions on unlocking the potential of the digital economy and on empowering digital cooperation, while Carlos Rey-Moreno detailed Zenzeleni’s development in a session about community networks. The AfIGF 2018 report provides further details about sessions, participants, key issues discussed and policy recommendations.

APC was involved in several workshops and sessions at the Asia Pacific Region Internet Governance Forum (APrIGF), which took place in Vanuatu on 13-16 August 2018. The event ran under the theme “Empowering Communities in Asia Pacific to Build an Affordable, Inclusive, Open and Secure Internet”, and covered a range of pressing regional ICT governance and use issues. APC raised important issues around privacy during the capacity building pre-event. As a panellist in the session on community networks, APC Executive Director Chat Garcia Ramilo asked how we can ensure that community networks do not replicate existing inequalities and stressed the need for local content provision. Asia Policy Regional Coordinator Gayatri Khandhadai coordinated and participated in a session on “Privacy in the Digital Age and the Rule of Law” and shared APC’s research on privacy laws in Asia, Unshackling Expression. APC member LOOM Nepal, meanwhile, discussed online gender-based violence in Nepal and shared research developed as part of the APC’s EROTICS South Asia exploratory research project during a session the “Responsibilities of Internet Platforms for Tackling Online Abuse Against Women and Other Marginalized Groups”. Finally, APC met with the UN High-Level Panel on Digital Cooperation, during which, as Khandhadai describes it, “We raised the need to know more about how digital cooperation is defined, its composition and mandate.”

The 11th edition of the Latin American and Caribbean Internet Governance Forum (LACIGF), officially known as the Regional Preparatory Meeting for the Internet Governance Forum, was held from 31 July to 2 August 2018 in Buenos Aires, Argentina. APC members Derechos Digitales and Colnodo were very involved in the event, participating in sessions on community networks and the challenges and opportunities presented by algorithms. In addition, Derechos Digitales moderated a session on data use and protection. Valeria Betancourt, manager of APC’s Communications and Information Policy Programme (CIPP), led the session on community network management in the region and served as rapporteur for the session on the threats to freedom of expression and the challenges of disinformation in the digital environment.

A clear understanding of internet governance concepts and institutions is essential for productive participation in policy debates around today’s most urgent digital issues, including data privacy, cybersecurity and human rights online. Schools of internet governance have emerged around the world in recent years to meet this need, equipping civil society and other stakeholders with the knowledge to contribute to key conversations around internet regulation and development.

The 2018 African School on Internet Governance (AfriSIG) was held on 11-16 October. Established in 2013, AfriSIG has grown to become a uniquely important capacity building and networking event for emerging ICT policy leaders in the region, with more robust curricula and policy discussions taking place each year. The reflections and takeaways shared by AfriSIG 2018 attest to the school’s strength and importance. AfriSIG has also propelled internet governance conversations in national contexts throughout Africa. In the past few years, schools have sprung up in Kenya, Tanzania, South Africa and West Africa, organised by alumni who bring training and expertise gained at AfriSIG back to their local jurisdictions.

APC was additionally involved with schools of internet governance in other regions of the world. Anriette Esterhuyen, for example, participated as faculty in the 2018 edition of the European Summer School on Internet Governance (EuroSSIG).

As 2019 progresses, planning for the major regional internet governance events and the global IGF is well on its way, with many of the dates and locations already announced. The 7th edition of AfriSIG will be held this September in Chad, immediately prior to the African Internet Governance Forum. The 2019 edition of EuroSSIG will be held in Meissen, Germany, on 14-20. AprIGF 2019 is taking place on 16-19 July at Far Eastern University, Vladivostok (see the list of accepted workshops), and LACIGF is scheduled from 6-8 August in La Paz, Bolivia. IGF has compiled a useful calendar providing information about all scheduled national and regional governance forums around the world. Finally, this year’s 14th annual global IGF scheduled for 25-29 November in Berlin.

For our part, APC is looking ahead to see how we can support our members and leverage these events in order to influence more inclusive, transparent and democratic internet governance processes worldwide. APC is working directly with several national and sub-regional schools in Africa to provide advice and support, and will also be participating in the first ever North American School of Internet Governance taking place this November in Montréal, Canada.

Check back in the coming months as we prepare for and reflect on another season of forums, schools and events exploring the best way to collectively govern our complex, evolving digital world.