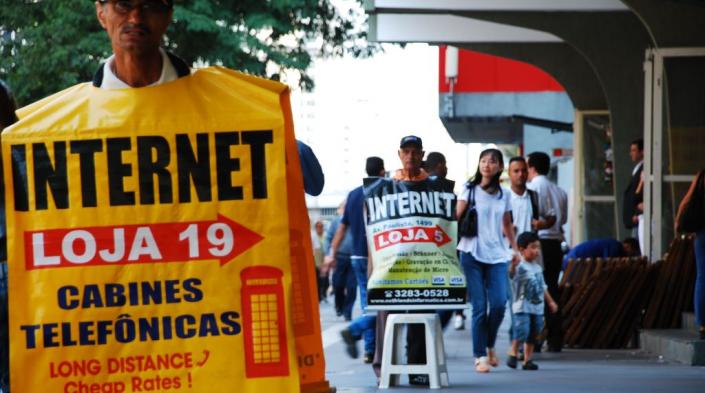 In the telecommunications realm, Brazil is manufacturing equipment that can compete with Chinese technology in price and quality. However, on both the periphery of large cities as well as in sparsely-populated areas, people do not have access to high-speed internet connections. Spectrum distribution (electromagnetic waves used for transmitting data utilised in electrical appliances, radio, television, and most recently, internet) is one of the factors affecting this situation. How? The government is committed to taking high-speed fibre optics to the major cities, and through the radio spectrum these connections would reach more isolated areas, both rural regions as well as the periphery of large cities.

Who regulates the spectrum?

After the privatisation process that affected Brazil’s main state enterprises during the 90s, an independent body was created to regulate telecommunications services: the National Telecommunications Agency (ANATEL). One of ANATEL’s tasks is to assign spectrum.

“The problem is that politically, ANATEL is not neutral,” affirms Carlos Afonso, of APC member NUPEF, and co-author of the study coordinated by APC on the issue, including summary documents and national reports from India, Kenya, Nigeria, and South Africa.

Although there are legal provisions to guarantee transparency in assigning spectrum frequencies, “when it’s time to choose, ANATEL favours the big telecommunications operators,” Afonso points out. These large companies buy packages of frequencies and often leave several ranges idle for reasons related to the market.

While ANATEL has the legal authority to repossess these licenses, this type of action is not actually being supervised. This especially affects local operators, for whom it is impossible to compete with larger companies that can afford to make more tempting offers.

In the meantime, the national broadband plan intends to use free-of-cost short-range frequencies, which operate on a local level. It is a question of making backbone connections universally accessible ─ in other words, to create connection hot spots with high-speed fibre optics in all the large cities, and ensuring that these signals reach other towns through the airwaves. A number of opportunities for local initiatives, both commercial as well as community, would open up this way.

For example, in the municipality of Santarém (in northeastern Brazil) a local organisation is researching the possibility of creating a free cell phone network using these connection points. Currently, the exorbitant costs charged by operators makes this type of business impossible.

As one can imagine, large telecommunications companies don’t favour the Brazilian government’s ambitious plan. “Today the big companies are not providing services to a great number of areas, or do so with terrible quality, or at extremely high costs,” Afonso indicates. However, once the plan is completed the market will open up. “They are doing everything possible to keep Telebras, the state company carrying out the plan, from buying the equipment,” he adds.

The digital age: extending our reach

Brazil’s geography often means local frequencies fail to reach municipalities with low population density, thereby excluding them. The digital migration of television transmission waves is going to free up high-range frequencies that can cover greater distances ─ but the rules for freeing up these frequencies have yet to be defined. ANATEL should take advantage of this opportunity to promote open spectrum initiatives (such as with free licenses) and thus create more business and community opportunities, Afonso explains.

As far as radio, digital migration could allow community radios to regulate their own frequencies. Currently, the procedure for obtaining a community radio license takes over seven years. The result is that most of them operate illegally, often interfering with other types of frequencies (such as those used by aviation). By introducing self-regulation and promoting such forms of alternative communication, new and better means of communication will be available to all Brazilians.