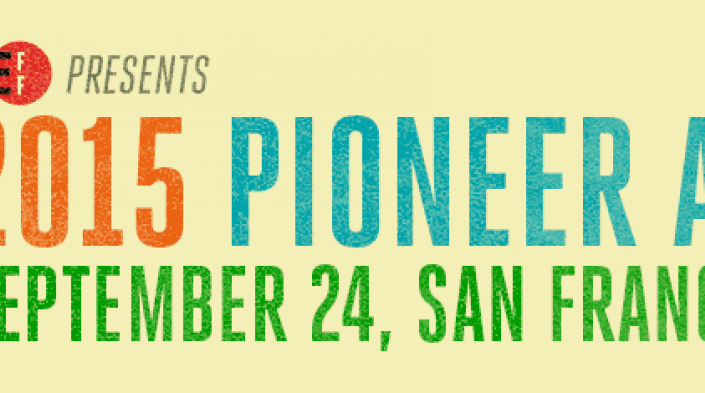 On 24 September, the Electronic Frontier Foundation (EFF) will present the winners of this year’s Pioneer Awards in San Francisco. At APC we are thrilled to see our director Anriette Esterhuysen and the work of APC among them.

“This award means recognition of the APC network’s pioneering contribution over the last 25 years from an organisation that we respect enormously,” said Esterhuysen. “We have worked hard to get the internet to people and places often overlooked by the mainstream internet developments, and we understood early on that it is not just about access, but also about the freedom and rights needed to use access for protest and action, to organise and to build communities who fight for justice online and offline. EFF is aligned with these values, and the fact that it has recognised our work is an enormous motivation.”

The late international privacy expert Caspar Bowden, the human rights and global security researchers at The Citizen Lab, and digital community advocate Kathy Sierra will also be recognised with the award.

“This extraordinary group of winners have all focused on the users, striving to give everyone the access, power, community, and protection they need in order to create and participate in our digital world,” said EFF Executive Director Cindy Cohn. “This group has worked tirelessly to bring to life a future where new technologies don’t compromise privacy or safety, or leave anyone behind. We are so proud to honor them with Pioneer Awards, and we’re deeply grateful for the work they’ve done.”

Awarded every year since 1992, EFF’s Pioneer Awards recognise the leaders who are extending freedom and innovation on the electronic frontier. Previous honorees have included Aaron Swartz, Glenn Greenwald and Laura Poitras, Richard Stallman, and Anita Borg.

For more information on the Pioneer Awards: https://www.eff.org/awards/pioneer/2015.