“Take Back the Tech! has always been a celebration of women and tech”

Home / News / “Take Back the Tech! has always been a celebration of women and tech” 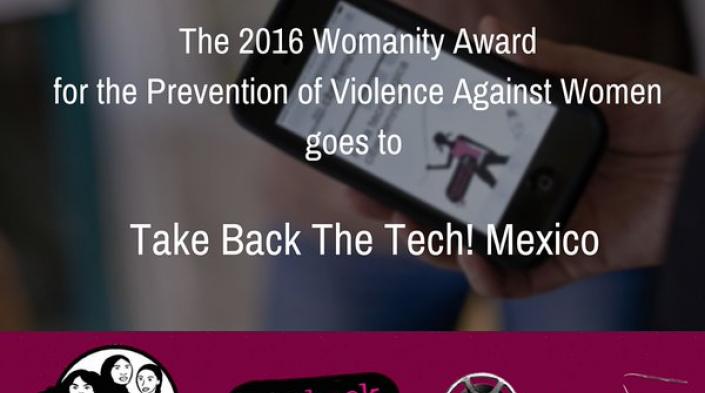 The Take Back the Tech! (TBTT) campaign, along with Luchadoras and La Sandía Digital from Mexico, recently won the Womanity Award for the Prevention of Violence Against Women. Lulú Barrera and Erika Smith, from Luchadoras and APC respectively, shared with APCNews what is next, and what this recognition means in the context of TBTT’s 10th anniversary. “Everything is possible when we work together using tech and connecting different spaces and strategies,” they say.

APCNews: TBTT is celebrating its 10th anniversary this year. What does receiving this award mean in this context?

Lulú Barrera: On one hand it means that what the campaign aims for is still a relevant and concerning issue throughout the world. We’ve been working to eradicate violence against women (VAW) for years and yet we’ve seen how cultural change as a long-term goal adopts new forms of manifestation over time. Tech, gender and power are implied in so many different levels but remain largely unquestioned as such. Online violence is growing and in countries like Mexico is just starting to be recognised. On the other hand it speaks about the great capacity TBTT has to be open, adaptable and locally relevant, and that is the most amazing achievement of the campaign. It is not impositional or copyrighted, rather it is open and allows itself to be “owned”, and to speak to lived realities on the ground. It allows its campaigners to actually use technologies to address gender issues and that in itself – the process of shaping, messaging and disseminating a campaign you can feel is yours – is an empowering process, that reverts the disempowering effects of tech when used to harm.

Erika Smith: It’s hard to believe it’s already the 10th anniversary of Take Back the Tech! Certainly one thing that TBTT has always been characterised as is a celebration of women and tech and excitement around it, the feeling that anything and everything is possible when we work together using tech and connecting different spaces and strategies. The Womanity Prize not only intensifies our excitement but also underscores the idea that new ways to address gender-based violence are not only possible but necessary. It’s always been refreshing – and contradictory – to be so excited about a campaign during a period when we are also reminded again and again how ever-present gender-based violence is in every sphere of women’s and girls’ lives: during the 16 Days of Activism against Gender-based Violence, 25 November-10 December.

There is always a lot of anger and indignation when we see the harsh reality in every single country and community and see that the epidemic of violence and crisis continues. Certainly over the years, TBTT has expanded to cover activities year-round and have other campaigns, but this time period is still vital – and now with the Womanity Award, TBTT can even better question how to put this conception of violence as normal and ever-present on its head, offering alternatives that celebrate women and where gender-based violence is not only questioned but torn apart.

Receiving the Womanity Award is incredible recognition to all the TBTT campaigners who over the years have done so many different things – from simple individual acts of sharing better privacy configurations with families or schoolmates to holding sessions to question the use of certain platforms to quilting together resistance. The award affirms that every single action matters and builds the possibility of transformation. And that Womanity wants to focus on making this local in one country especially, completely connects with Take Back the Tech’s basic principles of developing campaigns and actions that make sense in people’s local context, that address local needs and priorities, attacking a huge global structural problem that plays itself out on women’s individual and collective lives.

APCNews: About the Women Shape the Web video: What is the backstage of it? How did you come up with such an amazing and condensed visualisation of TBTT’s essence?

LB: When planning our application for Womanity, the team in Mexico (around 20 activists from six feminist collectives) asked ourselves what it meant for us to “take back the tech”. That is how we came to the tagline “seeing women going from users to producers of the web”, which means realising the potential we all have to shape the web and overcome all those barriers that tell us that tech is complicated, masculine and dependent on the action of the powerful. It also speaks about some of the causes that reinforce such ideas, like online violence, a topic of great concern to us. But most importantly it seeks to show how we plan to realise the message of the campaign on the ground, so the second half of the video speaks about collective power and networking, creativity as a means to counter violence, and women’s voices as the leading force of the campaign.

What I love most about the video is that it sums up what the project is about, it tells a story in a compelling way to raise awareness, and it was created collaboratively by us, so the result is a collectively owned piece that makes ICT speak against violence against women, so it is just a small taste of what is yet to come.

ES: The TBTT Mexico proposal was developed through a series of meetings with the six different collectives who will help implement plans in Mexico, coordinated by Luchadoras. Each of those sessions brought more ownership and understanding of what Take Back the Tech! is all about – interpreted by the collectives’ local experience and reality. One excellent exercise was to deconstruct what terms like “taking back” and “technology” mean to us all, from our different experiences as feminists, as activists, as women. What was our relationship with technology over time and how had it changed, how did we feel about it? We also shared how Take Back the Tech! had begun as a way to celebrate women’s history with technology and to build awareness around tech-based violence and skills to address it. The collectives exchanged about the way violence against women and girls online was happening in different places around the world and TBTT campaigner strategies around it. When it came time to develop the storyline for the Women Shape the Web video, Luchadoras and Sandia Digital led the participating collectives and APC through a story-building exercise to quickly ensure not only what we wanted to communicate in the video but the way we wanted to get our message across. Much like we want any TBTT campaigner to feel energised and motivated to experiment with technology, we wanted a video to show ways that TBTT Mexico would galvanise such hope, expression and transformation – and anyone watching the video could be inspired to participate too.

APCNews: Why Mexico? What impact do you expect to have in the country and in the region with this work?

ES: Why Mexico? In great part because Luchadoras and Sandia Digital – two of the most amazing feminist expression initiatives that really put communication into women’s hands – are based in Mexico. And the reason why they are so popular and so important is because of the harsh reality Mexico is facing at this time.

LB: In Mexico nearly 47% of women in a relationship have experienced violence by their partner and seven femicides happen each day. There is a lack of trust in our justice system and government action. This difficulty has led to the emergence of a vibrant feminist movement, that mostly uses digital spaces to speak against violence against women. We’ve also been seeing a rise in violence against women online, and a great need for creating strategies of solidarity from the grassroots to respond. 2016 has been a particularly wonderful year of action and organisation, and TBTT will build into that.

ES: In many countries there is a lot of reference to rape culture and what it means to have society grow up and operate within a culture where rape is completely normalised. In Mexico, women not only face rape culture but a culture of femicide. Women’s lives – especially those women who go against the tide, transgress, question authority – are completely at risk. The recent examples of women publicising their decisions to denounce street harassment and the waves of online and physical violence expressed for daring to denounce (including death threats and women having to move to ensure their safety) is a basic indication of the severity of the problem.

APCNews: What is next? How will APC, Luchadoras and Sandia Digital work together to move this forward?

LB: TBTT Mexico has four lines of action. First, using storytelling to challenge norms that perpetuate discrimination and violence, by enabling a cultural shift from women as users to creators of the internet, and to occupy the web. Second, creating campaigns to build awareness on how women and girls experience online VAW. Third, amplifying collective power by creating a feminist network of women’s rights activists, internet rights activists, techies, journalists, content producers and artists in Mexico that come together to take action to end VAW. And fourth, strengthening reaction against VAW by holding a series of workshops that make use of digital and physical self-defence strategies with women and girls, to challenge protectionist narratives and help women to realise their own capacities and potential for being the providers of their own safety.

ES: Of course there are the Take Back the Tech! 10th anniversary plans which include a series of different activities. One is reconnecting with TBTT campaigners who have come and gone, or who still accompany us – learning from their experiences, what participation in TBTT meant to them or how they’ve seen attitudes/practices change in their communities.

In Mexico the collectives participating are already meeting to map out their action plan, but this year there will be city conversations about women, technology and a feminist internet to begin to share the idea of Take Back the Tech! with more women and youth in Mexico and see how it connects with their experiences and interests. These conversations will help build a common ground and set TBTT priorities in Mexico. Furthermore, a forum with women-owned media and media producers – from feminist zines to women journalists – is planned for October. Such a gathering of great communicators is an excellent way to share knowledge about tech-based VAW and strategies to provide coverage not only of gender-based violence but also to question how we can represent women and girls positively to break down the systematic and normalised presence of violence in our lives.

LB: The most exciting upcoming tasks related to this initiative are the networking, being able to get women together to discuss, analyse, create collectively and take action. This is a proposal for movement building, for the creation of a community engaged with the use of technologies for social change from an empowering perspective.

ES: Furthermore, to be able to do so in a country that is reeling from violence that cuts across women’s lives in so many ways – be it migration, femicide, drug trafficking, street harassment, threats against journalists and women’s expression, non-consensual dissemination of private and intimate information, etc.